Mending John Ochwo: A Letter of Appreciation from Uganda 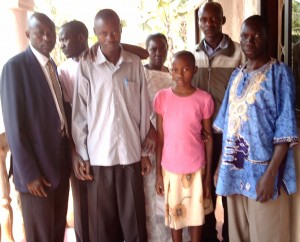 The following is a letter written sent to us by our Project Coordinator, Charles Naku, for Uganda. This letter is about John Ochwo, a patient that RMF has been supporting for the past year and who with the generous support and connections of Mending Kids International was able to receive a vital heart surgery for free at a top hospital in India:

I was smothered in hugs the day I broke the news to John’s family that John’s operation abroad was approved and the date is fixed.  The family had been in strife with the child’s life right from the day they were told he had heart problems.  When it was discovered that John had heart problem, the family was told to tak John to Mulago Hospital on a monthly basis but the family could not afford this.  They could only take John to Mulago when John was seriously sick, and this meant soliciting funds from relatives and neighbors who felt that the life for John was diminishing.  Whenever John came down with malaria and a fever his life was at serious risk anyone could easily tell that the boy had a major health problem.  This is how this boy brought to the attention of Sister Clare who was moved with concern seeing the hard life this child.

Whenever Sister Clare cold check in on John he was either absent from class or in class but very ill.  When she asked more about the boy, she found that the boy had this problem with no proper treatment due the costs of treatment.  When RMF intervened by sponsoring John Ochwo for monthly medication at Mulago Uganda national referral hospital, the family was felled with joy.  This joy did not only stop here but peaked on Sunday, when they received their son back from India where he finally had his heart operation.  Many deep thanks go to Mending Kids International who facilitated John and his brother and covered all of his expenses occurred for the trip to India.  Very special thanks also go to Sylvia and their team that worked day and night to see that John and his brother Dominic are catered for at all levels to see that John and Dominic were comfortable.

John returned in good condition with only minor complaints of stomachache, chest pain, and his kidney. John is now back happily though he is not yet completely healed, his family is happy filled with joy but more help is needed.  He might also need some emergency attention whenever he may have unusual complications that he feel.  John successful operation has made the name of Mending Kids International and Real Medicine Foundation known and sound powerful.”

Categories: Medical Support of Individual Children Thank You Uganda or View All
Return to Top