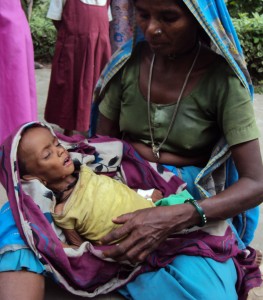 Meet Sonu, a little boy who kept our whole RMF India team up worrying 2 weeks ago.  He came into the NRC hardly conscious at hardly 5 kg and 2 years old.  When we got his White Blood Cell count and it was over 40,000 they referred him to the District Hospital at 11pm so he could be seen by an better pediatrician. Dr. Fabian Toegel, RMF’ Team India’s Country Director,  was at the hospital with Sonu until after midnight making sure that the doctor gave him proper treatment.

While got the right dose of anti-biotics and was seen by the right doctor, the conditions at the district hospital were horrible.  With 3 patients per bed in the pediatric ward, Sonu’s family, from a rural village in Jhabua, were extremely uncomfortable.  After a nurse at the district hospital yelled at the family for not taking care of their child, the family left the hospital.  When we found out about this we sent out a car and our CNE Salma immediately to the village to get Sonu and his family and bring them back to our Jeevan Jyoti NRC treatment center.

We made sure the family was as comfortable as possible and brought the doctor from Jhabua to Meghnagar to look after Sonu and the other children at the NRC.  Sonu’s mouth was covered in soars so bad it was painful for him to even drink milk.  All members of the RMF team took turns sitting with Sonu and his mother and painstakingly used an eye-dropper to feed him F75. 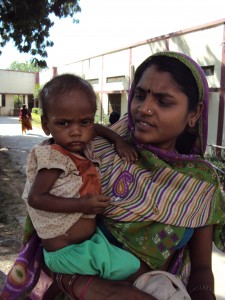 Now, 2 weeks later look at him! (See photo at bottom)  Sonu has gained 2 kg, is smiling, giving attitude, and eating everything he can get his hands on.  He’s been switched over to F100 and his on a solid, local foods diet as well.  The other day Jaimie and I were sitting by the canteen and saw Sonu and his father come over and buy a piece of candy. Sonu saw us staring at him as he dove into the candy and then held out his hand and offered his candy to us. Jaimie and I both had tears in our eyes.

Sonu still has a long way to go to make a full recovery.  He’ll probably be with us for another 2 weeks or so and we’ll have to keep a constant eye on him to make sure he doesn’t get sick again or loose this momentum in weight gain.  But we’re optimistic!

We have a lot of very serious cases in the NRC right now who we’re worrying about, but its success stories like this that keep us going. 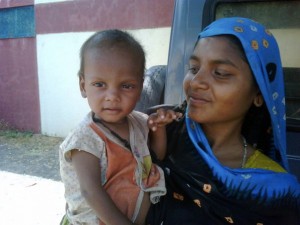 To contribute to this initiative, visit our website at realmedicinefoundation.org.