Kenya: Stories from the field in Turkana 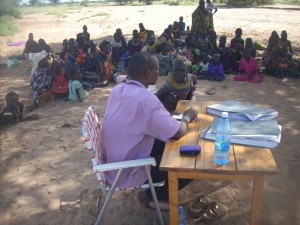 photo: Derrick seeing a patient at an outreach camp

Our health care outreach program in collaboration with Share International and Medical Mission International serves the area of Turkana Kenya. The aim is to improve the delivery of primary Health Care Services within the Turkana Drought Region in Northern Kenya, its capital Lodwar and the people living in the remote villages of Turkana, Kenya.

The following are some patient success stories told by Derrick Lowoto, the Clinical Officer, over the past three months from Turkana.

“Lokorio is a 45 year male patient from Kerio 68 km east of Lodwar.  He has been sick for the last two years. In course of his sickness, he visited several witch doctors for treatment but with no success. After losing several of his animals to these witchdoctors he decided to make the journey to the hospital for treatment. He first went to Lodwar district hospital for treatment but after completion of treatment he was still sick. Later, he was brought to RMF/SI clinic in Lodwar for treatment by a relative.  After a week, Ekai visited the clinic again with improvement from his chronic itchy skin disease. A month later he visited the clinic with no skin disease and is clear of all other symptoms.”

“Agnes Lokaala is 68 years from Nakabaran village and has had chronic pelvic inflammatory disease for seven years that caused her difficulty in walking.  Past medical history indicated her of having visited several hospitals for same problem but all in vain. One morning Nakabaran church pastor called us of having sick patient who need referral. We brought the patient to the facility and we started on –Norflaxicin for six weeks. After treatment she was well and able to walk.  Agnes is among the many who receive services offered by Share International and RMF here in Turkana land and they are grateful of it and pray for SI and other partners.”

“Mr. Edapal Lokai, 82 years old and from Chokchok Village has been suffering from a chronic urinary infection for the past 3 years in a far village about 150 km north of Lodwar.  He moved to Chokchok Village to be nearer health facilities for treatment. He has been going to Lodwar District Hospital for treatment but remains sick.   During the special clinic in June, we treated him in his own village, but he remained symptomatic.  Last month, we held a mobile clinic in Chokchok Village and found he was still sick. We prescribed him Augmentin tablets for seven days. Two weeks later, I visited him and found him in a fair state. During the visit, I gave him Norfloxacin for a two week course.  After two weeks, I called the pastor of the village to confirm the state of the patient.  (The pastors are usually the only persons in the village with a cellular phone.)   The pastor said he was doing well.  After one more week, I visited him and found him in much better condition. He was a changed man in terms of health.  He had lost hope in life, but now he hopes to live long.”

Categories: Disaster Relief Kenya or View All
Return to Top