By Kevin Connell and Jonathan White 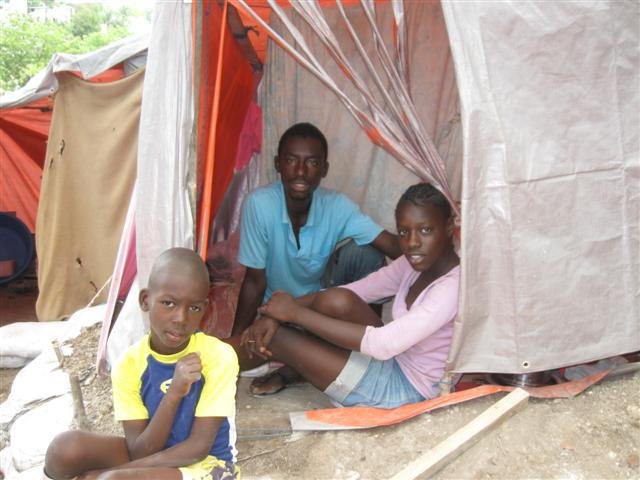 This series of video clips was shot by RMF’s Kevin Connell in the St. Pierre Square tent camp in Petionville, an upper-class neighborhood of Port-au-Prince.  This is a small tent camp set up in a public square but one of the largest tent camps in the city is located on a nearby golf course with an estimated 50,000 people occupying.  Voluntary settlements like these were setup in virtually every square or open space in the city after the disaster.  These clips gives you a little more insight into the living conditions that most of the Haitians displaced by the earthquake are still dealing with.  Little has been done to create any longer term housing solutions, but as you can see from these video clips the Haitian’s are still making the best of a very tough situation.

Can I see Your Place

On the Way to Evens’ Home

The man being interviewed is Edwin, he’s in his early 20’s, originally from Carrefour, which is a poorer neighborhood nearer to the coast, but had moved to Petionville when he was younger.  Edwin has finished high school where he learned English (spoke fluently) and had done apprenticeship training to be a mechanic.  He said he wasn’t working because there were no jobs available if you don’t know someone or aren’t connected to someone in a position to hire you – kind of the extreme of our unemployment situation here in the US.

Edwin said his time is now focused on taking care of his family, with 6 brothers and sisters.  They all live in the tent shown in the final clip, which is small to say the least.  He didn’t mention how many family members had died in the disaster, but did say that his entire extended family was living in the tents and therefore homeless: aunts, uncles, cousins, etc.  As you can hear in the clips, he references the government as the source of most of the problems, and does not hold out much hope for their ability to lead in the reconstruction.  One surprising thing was that he didn’t seem to hold any complaints for the international community, which was found to be pretty common.  When Kevin asked him what he would say to America, he simply thanked the US for our support.

Life in the community

All the people were very welcoming and friendly, which was a little surprising, given their predicament.  The community had truly carved out a life in that square and things appeared “normal” for them, which really highlighted their adversity/resourcefulness, but also their general acceptance of the dire situation around them.  They were mostly busy doing laundry or taking care of their kids.  Many of the kids were studying out of textbooks.  They all lit up when Kevin said he was from America – they apparently have high hopes for our role in the reconstruction.

Categories: Disaster Relief Haiti In the news Videos or View All
Return to Top