Haiti Update: Lambert Santé’s Director Honored with Award from the Ministry of Health 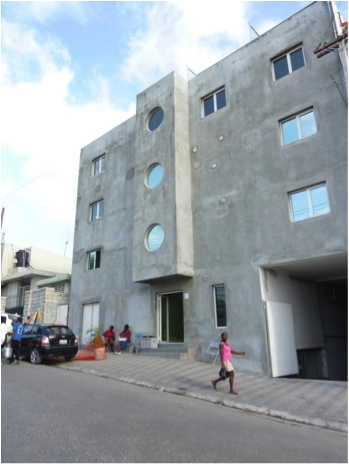 Real Medicine has continued to push forward its strategy for healthcare in Haiti.  Our partnership with Lambert Santé has been building traction over the past few weeks.  The hospital has already hired 3 out of 4 new medical residents to join the core staff at the hospital and is working on hiring 4 nurses, which we expect to happen over the course of the next two weeks.

This critical increase in the rotating core medical personnel at the hospital will go to support 24 hour emergency care, continued post-operative care for earthquake-related injuries and general practice medicine.  The increase in manpower will begin to help replace what has been a steady but reduced flow of volunteers and ensure that the hospital always has someone available to handle cases, no matter when they should arrive.  Real Medicine plans to expand this program in the next few months as the hospital continues to transition away from disaster-related care.

The residents will train under Dr. Margaret Degand, the hospital’s Director, who was recently featured in the Port-au-Prince newspaper, Le Matin, as a leader and hero in the private Haitian community’s response to the health crisis.  Dr. Degand is a plastic surgeon by trade, who made the pivotal decision on January 12th to change her clinic into a hospital and begin offering a range of advanced care and treatment services to the surging patient population.

Quickly becoming a go-to destination for fracture-repair (through what is called external fixation), reconstructive surgery and post-operative wound care, her small 14 bed facility rose to the challenge, treating more than 1200 patients since that first day and performing more than 820 surgeries. 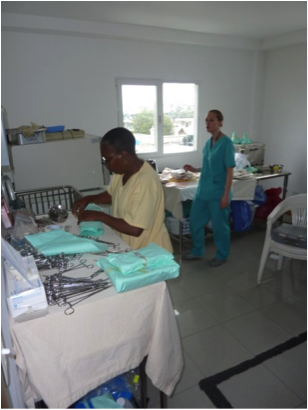 Dr. Degand, who was a highly-regarded surgeon before the crisis, has recently earned praise for her efforts in post-earthquake healthcare delivery.  As noted in the article, she received an Honorary Certificate of Merit last month from the Haitian Ministry of Health for her efforts, an award which she has proudly hung over the hospital’s entryway.  Dr. Degand is quite proud of what she has been able to accomplish for the Haitian community in the past four months, and her success in responding to the need is only enhanced by her hope to help transform the quality of care given to the Haitian public permanently through continued partnerships with the international community and the Haitian government.

She works around the clock at that dream, often taking patients in for emergency treatment in the middle of the night or performing as many as 23 surgeries on the same patient to ensure best-practice results for everyone—regardless of their means.  Her hospital has relied on the generosity of the international medical community and Dr. Degand’s wide-network of friends in Europe, highly successful surgeons, anesthesiologists and other medical professionals, who continue to volunteer their valuable time to fly to Haiti and serve in her hospital.

However, the resources are not as available 4 months after the crisis as they were at the height of the crisis, and Dr. Maggie, like so many health directors at hospitals throughout Port-au-Prince, is anxious about the future.  She knows first-hand the need for restructuring in the healthcare system, which has been ravaged by the widespread destruction.  Since January 12th, private hospitals have stepped in to fill the void in available health infrastructure (due to the earthquake’s destruction) to meet the heightened need for treatment around the country.  However, many hospitals are straining to meet the public need without sufficient external support from the government or from international donors.  Some are even closing under the financial pressure, as was the case with RMF partner hospital, CDTI.

Dr. Degand sees the need to support public/private hospitals with funding not just as a short-term solution to save the country from a protracted health crisis, but as an opportunity to improve the quality of public healthcare in Haiti for good.  In the article from Le Matin, Dr. Degand says (translated from French):

“All these people who died must not be for nothing; we must ensure something comes out of it. Public health, good or bad, is too expensive in Haiti because of a lack of resources, unlike in the Dominican Republic where [even] the private medical sector is generally subsidized by the state or banks”.

Dr. Maggie believes that the outcome of the health crisis in port-earthquake Haiti should be the formation of a new public health system built in partnership with private hospitals and clinics to ensure quality healthcare for all, rich or poor.  At Real Medicine, we couldn’t agree more.

Read more about our partnership with Lambert Santé