At approximately 3pm local time on September 24th a storm with high winds and rain struck the Port-au-Prince metropolitan area for about 30 minutes. The storm was not predicted and no warnings were therefore issued. Thus far, five people were confirmed dead and there are several reports of injuries and people being trapped under fallen trees and collapsed shelters. The camp management and camp coordination cluster (CCCM) currently estimates 2,000 tents damaged or destroyed in camps across Port-au-Prince. Assessments of damage are ongoing and these numbers may well rise. The Direction de la Protection Civile (DPC) has requested the distribution of shelter materials (100 tarpaulins) to affected populations in three camps. Planning for this is under way. UNICEF has also mobilized 1,000 blankets for camps at Caradeux where 931 children were affected.

While four hospitals have reported flood and other damage, most are functioning and have increased staff to deal with the incoming injuries. The MSF Holland hospital is damaged but functioning; the MSF Belgium facility is fully functional and reports an influx of patients. One hospital (L’Hôpital de la Paix) has reported to be unable to function due to flooding. Clinic tents at Pétion-Ville Golf Club camp were blown down. The IFRC Hospital (L’Hôpital de la Fédération Internationale de la Croix-Rouge) in Carrefour reports no structural damage and has put extra staff on standby. Minor damage is being reported in Léogâne and Petit-Goâve where the bridge at the entrance to the city was affected, but the main area of concern is Port-au-Prince.

The UN and humanitarian partners has convened an emergency response taskforce at OCHA, with the main clusters represented to ensure full coordination of assessments and response. DPC has activated the Centre d’Opération d’Urgence Départemental to coordinate the response, and has activated their representatives at camp level. Priority areas for the response have been identified as shelter and mitigation work in camps where water is not draining away. All camp leaders are being called across the affected area to gather information about the damage and needs and to determine appropriate response. MINUSTAH (United Nations Stabilization Mission in Haiti) has deployed five battalions across town to assess camps and damage to the area. They have also responded to some reports of people trapped or medical emergencies. Multi-sectoral assessment teams are being assembled by CCCM/IOM and will begin assessments at first light including teams from WFP among other agencies. A minimum additional five IFRC teams will also deploy, in coordination with CCCM. These are rapid assessment teams and will trigger rapid distributions of assistance. An aerial assessment of the affected area will also be conducted on September 26th.

Six deaths and 67 injuries have been reported by Direction de la Protection Civile (DPC). To date 172 camps have been assessed and 21 priority sites have been identified. The priority need is shelter, with no major food or medical needs reported as a result of this storm.  Shelter cluster partners are distributing 5,240 tarpaulins, 150 tents and 785 shelter kits to those affected by the storm. Shelter cluster reports that these distributions will meet half of shelter needs and rest will be met tomorrow with further mobilization of stockpiled resources. The Government of Haiti has 15,000 tents available for distribution from Monday, September 27th, and 600 mattresses.

The DPC has reported 8,432 shelters damaged or destroyed. Approximately half of shelter needs have been met through the distribution of 5,240 tarpaulins, 150 tents and 785 shelter kits to those affected. In Corail camp, IOM relocated 111 families to transitional shelters constructed ahead of schedule. Assessment teams in Cité de Soleil reported that some houses had sustained damage and required tarpaulins as a form of emergency repair to reduce exposure to rain.

20 MINUSTAH soldiers are currently providing escorts for tarpaulin distributions in some affected camps. Security issues may remain a challenge for further distributions. The security situation remains calm. MINUSTAH UNPOL and Formed Police Unit (FPU) officers have been assigned to secure IDP camps are continuing their patrols to assess and report on the situation while ensuring security. This includes 559 UNPOL and FPU officers that have a permanent presence in six main IDP camps as well as 312 UNPOL and FPU officers patrolling other camps.

An increase of 250 MINUSTAH soldiers has been made to the 550 already permanently stationed in IDP camps: there are now 800 soldiers securing camps. Since the storm MINUSTAH provided immediate first aid, facilitated the transfer of the most critically injured to hospitals – a task shared with UNPOL officers – and assisted NGOs to move IDPs to safer grounds during the first hours.

No further increase in health issues as a result of this emergency has been reported. L’Hôpital de la Paix is operational. At the Pétion-Ville Golf Camp their field hospital was destroyed but the tent has been replaced by UNICEF and the facility is now functioning.

Map: Priority camps for assistance due to September 24th Storm 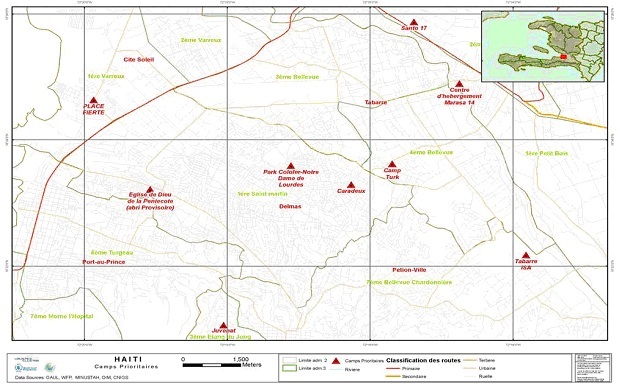