Haiti: No one sleeps inside anymore 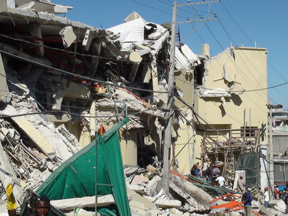 photo: Bodies were still pulled from this building on January 29, 2010 – 4 alone in the morning of that day. A total of 250 persons died in these buildings, a popular Caribbean market.

“I’d rather smell tires burning than bodies,” our Haitian driver told us as we traveled down Rue Jean Champs De Mars and Jean Jacques Dessaline, where the density of devastation is overwhelming yet still not as bad as Carrefour Feuille. It was evening and every other block had a fire burning.

Interestingly, with the exception of fleets of fire trucks in the area, the streets hummed along with an eerie normality.  It was unfathomable to think that everyone we saw would be sleeping in the street in just a few hours but this was the harsh reality throughout the city.  No one sleeps inside anymore.