Juba College of Nursing and Midwifery 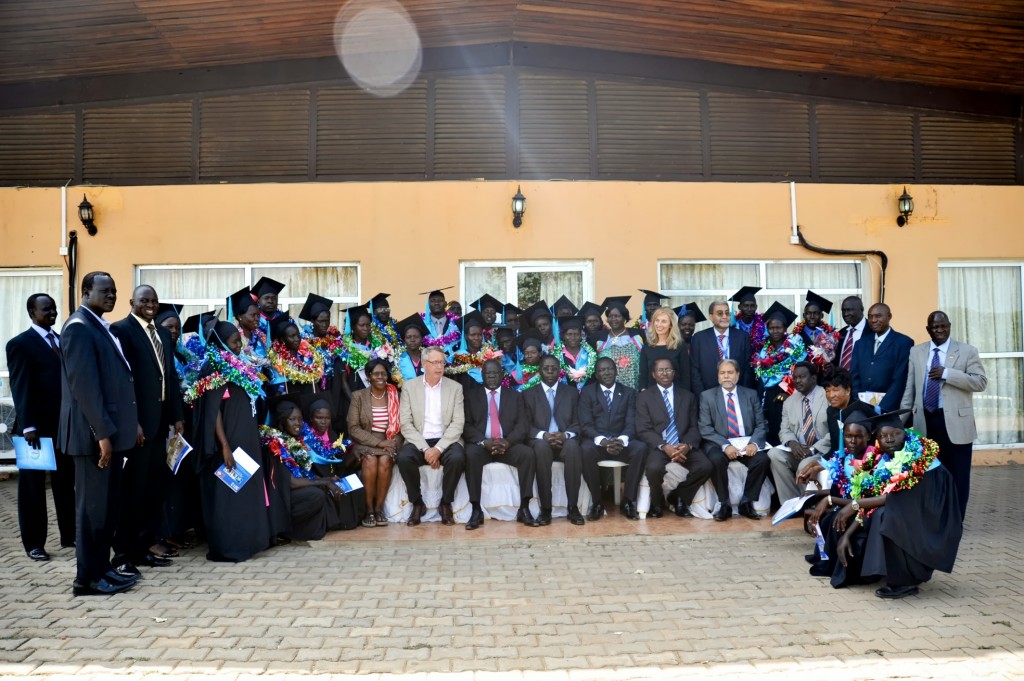 Speech by Dr. Eluzai Abe Hakim, Consultant Physician and Medical Adviser to the Juba Link on the occasion of the graduation of the first Diploma Holding Nurses and Midwives at the Juba College of Nursing and Midwifery (JCONAM), Thursday 29th August 2013, Juba, South Sudan. 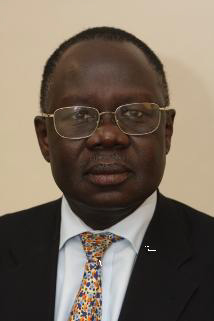 I wish to offer my hearty congratulations to the first Diploma graduates in Nursing and Midwifery from the Juba College of Nursing and Midwifery (JCONAM). My congratulations also go to the principal of the College, Ms. Petronella Wawa, the staff of the College, the Director General for Nursing and Midwifery at the Federal Ministry of Health, Mrs. Janet Michael, for working diligently to turn the vision of such a College into reality in exceptionally difficult circumstances. The cooperation of successive Ministers of Health and their respective Undersecretaries has been exemplary and deserve special mention. I regret the fact that I am unable to attend this historic occasion due to difficulty in taking time off work.

The College project is the product of a collective effort by a number of Non-Governmental Organisations which believed in our vision of a High quality College of Nursing and Midwifery for South Sudan which is an effective tool for implementing Primary Healthcare in rural areas of South Sudan. Well trained midwives are best suited to identify risky pregnancies through the use of well-honed clinical skills in the antenatal period and refer these to better equipped centres for safer delivery of the babies affected prior to commencement of labour. 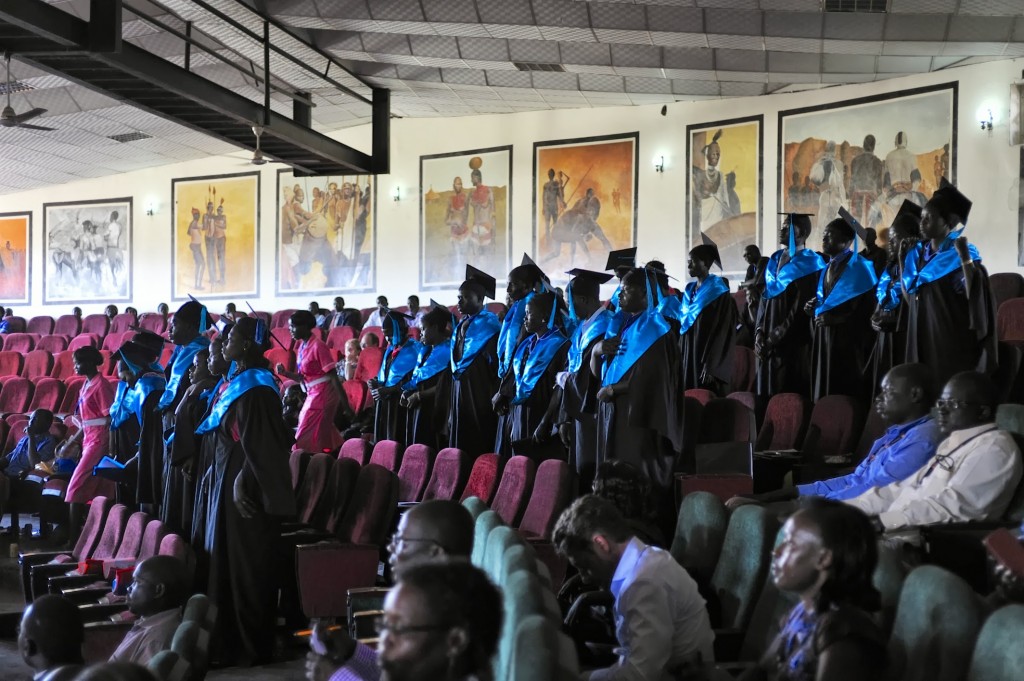 Registered Nurses working alongside Midwives and clinical officers constitute effective members of a multidisciplinary Team in the primary care setting to diagnose common illnesses, administer immunisations and teach Health Education and promotion, perhaps better than has been done before.  Subsequent graduates from this College will boost numbers of properly trained Nurses and Midwives and make the delivery of healthcare in the rural areas of South Sudan much better and more effective. 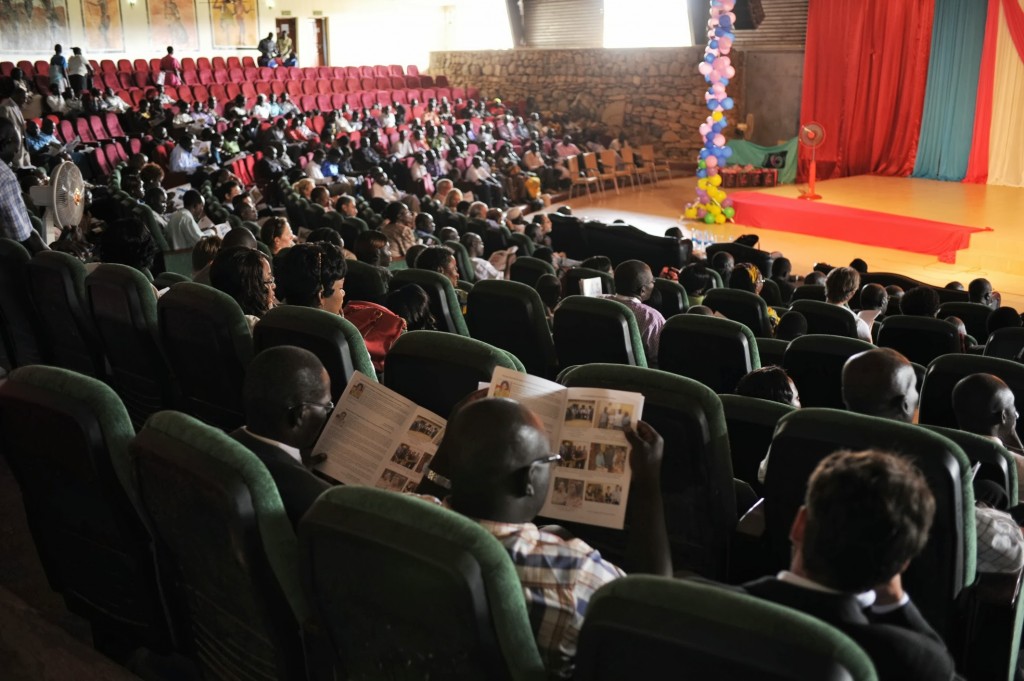 The College traces its origins to email correspondence and conversations between Mr. Michael Lear, then Director for International Relations at the Real Medicine Foundation (RMF) based in Los Angeles with Tim Walsh, consultant surgeon and at the time Chairman of the St. Mary’s Hospital, Isle of Wight-Juba Link and I .We proposed to Mr. Lear the development of a Diploma awarding College of Nursing and Midwifery, having identified a severe shortage of well -trained Registered Nurses and Midwives in South Sudan during an earlier fact finding visit to the country. 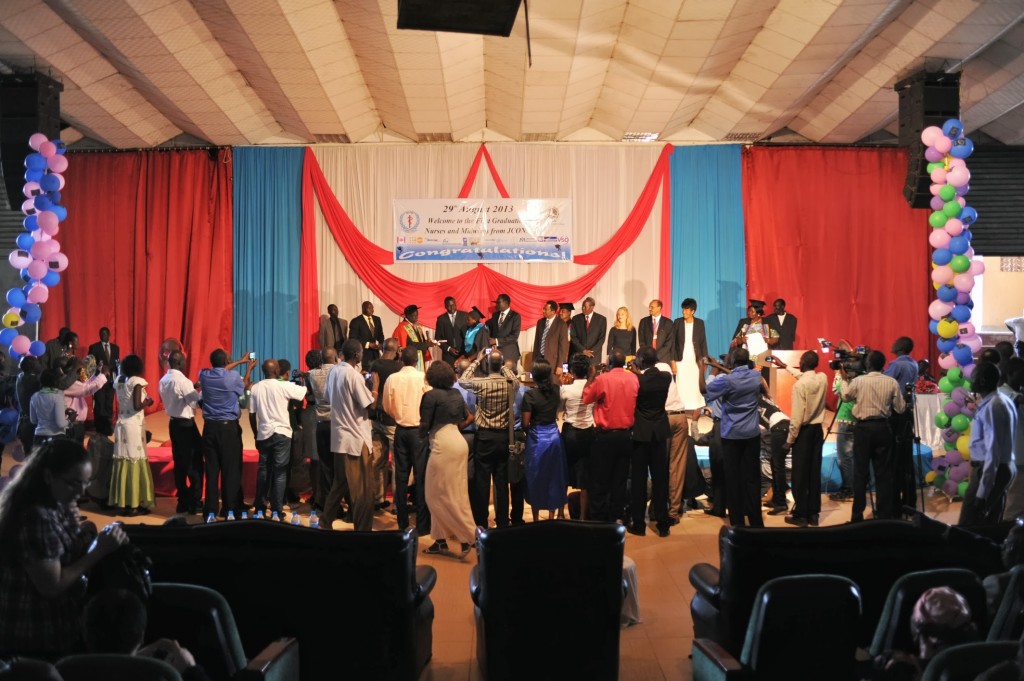 Following a series of correspondence and discussions with the Chief Executive of the Real Medicine Foundation, Dr. Martina Fuchs, Mr. Lear completed a South Sudan proposal including a request for funding to support capacity building for Nurses and Midwives on 22nd January 2009. The World Children’s Fund (WCF) responded by making a significant financial contribution to support this project through RMF. Mr. Lear visited Juba in February 2009, meeting with Drs. Dario Kuron Lado and Louis Danga who facilitated visits to various officials in the Ministry of Health to firm up arrangements for the start of the College. Early interest in the College project was expressed by the United Nations Population Action (UNFPA) through the involvement and support of Drs. Dragudi Buwa, Deputy Resident Representative UNFPA, Alexander Dimiti, Magda Armah and for the World Health Organisation office in Juba, Miss Roya Sadrizadeh, Nurse specialist adviser at the WHO office in Juba. The appointment of Miss Bilha Achieng, a Kenyan United Nations Volunteer as project coordinator ensured regular project board meetings and a clearer line of communication between the RMF, WCF, the Juba Link, UNFPA, the office of the Director General for Nursing and Midwifery in the Ministry of Health and subsequent organisations which joined the project during its gestation period. 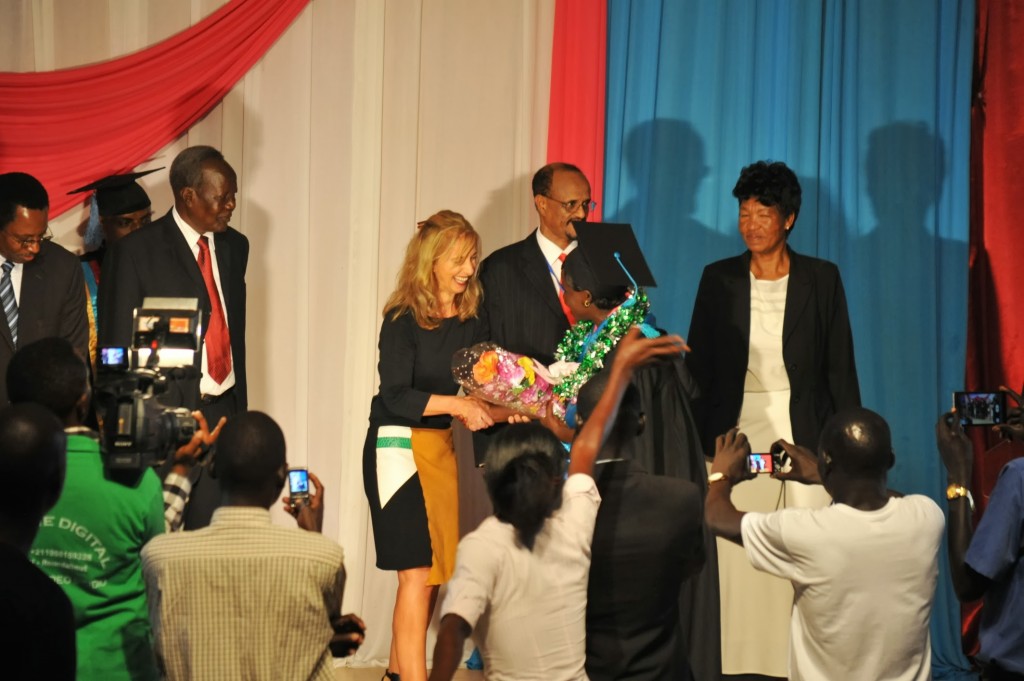 The Japanese International Corporation for Assistance (JICA) played a significant role in building the College infrastructure producing one of the most user friendly buildings in Town. The spacious lecture and seminar rooms, the Library, offices computer room, the furniture, the electricity and water supply all combined to provide the College with an environment appropriate for studying. The United Nations Development Programme (UNDP) and the World Health Organisation (WHO) contributed books and various learning materials. 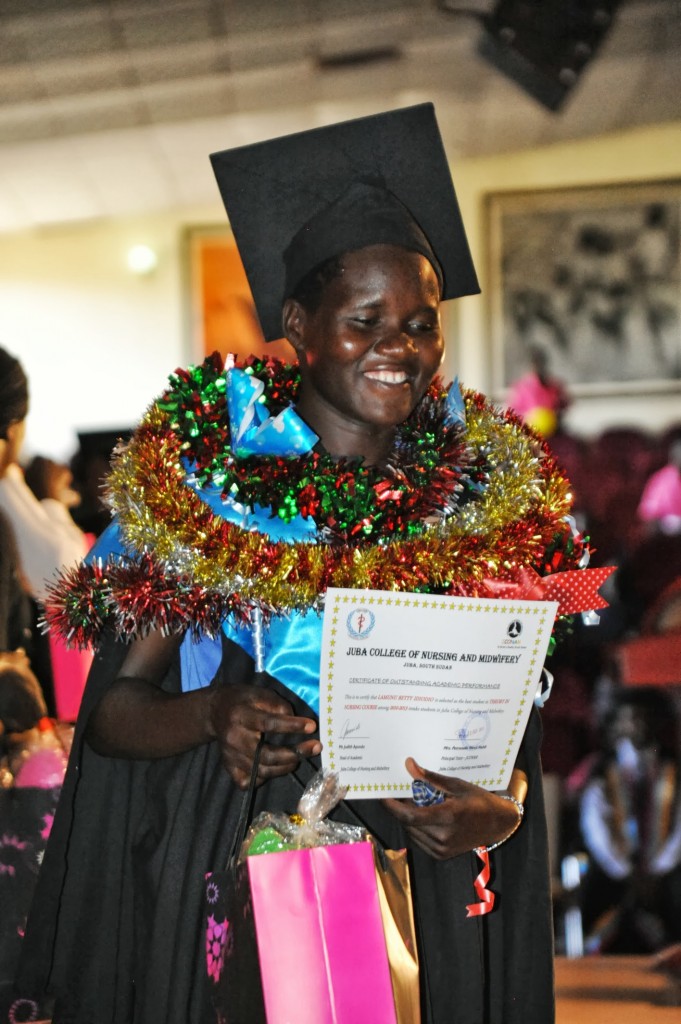 Whilst this project has been an effort of various Organisations and countries I have a nagging feeling that I might not have mentioned other Organisations which came onboard later on to support the development of the College. I apologise to them and wish to thank them in equal measure for their much appreciated contribution. At this juncture, I would like to single out the Real Medicine Foundation and the World Children’s Fund for funding the College to the tune of several hundred thousand Dollars per annum since its foundation more than three years previously. I have worked closely with Dr. Martina Fuchs, Chief Executive of the RMF, on the development of the College and hope to do so in its later stages in the future. Martina has raised funds to renovate the El Sabaah Children’s Hospital and hopes to do the same to the maternity unit where our trainee midwives will be gaining their hands-on skills. I wish to thank Dr. Fuchs, the staff of the Real Medicine Foundation and the WCF on behalf of the people of South Sudan for the significant investment in training our future Nurses and Midwives in the South Sudan. 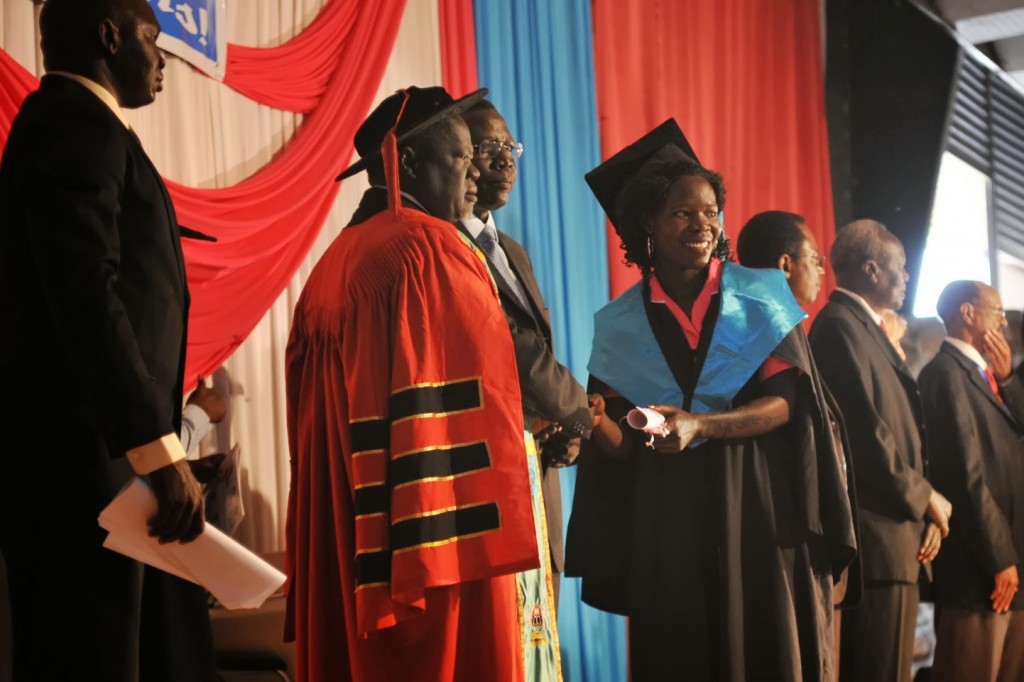 I wish to turn my attention to the new graduates. Please behave honourably in your duties, practice professionally, be kind to patients and expectant mothers because these are vulnerable people to who you are their only advocate at the time of need. Do not put personal gain before duty, keep your knowledge and skills updated frequently. Do not be afraid to say “I don’t know” as assuming knowledge where none exists may endanger life. Ask if in doubt and never shun work in rural areas. That is where the greatest Health need is. It is in the rural areas where you will improve your skills best and also make a great difference to the lives of expectant mothers, children and ill adults.

Finally we now have the opportunity to select a number of these graduates to train as tutors of the future. Some NGOs may wish to adopt this training as a project to support to continue the improvement of the College and increase the number of South Sudanese Lecturers in the College. We should start to think about developing short courses to update the knowledge, communication and practical skills of the traditional birth attendants through the College. Federal Government support for the College is crucial and must be included in the Ministry of Health budget. We cannot rely forever on donations from abroad, but should enter into strong partnerships with NGOs on training. Strategic deployment of the new graduates into paid posts in Health facilities in the various States is important to enthuse the graduates and offer those wishing to join the profession hope of reliable employment and professional satisfaction. The JCONAM Project is just a beginning and the model should be generalised to Malakal and Wau in the first instance, and eventually, to the ten States to secure the future of Nursing and Midwifery in the Republic of South Sudan.

Thank you for listening.