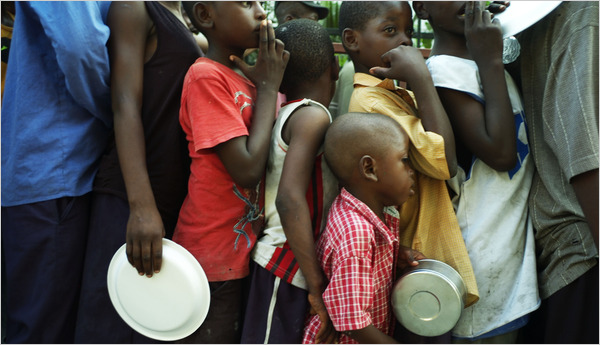 PORT-AU-PRINCE, Haiti — Maxi Extralien, a twig-thin 10-year-old in a SpongeBob pajama top, ate only a single bean from the heavy plate of food he received recently from a Haitian civic group. He had to make it last.

“My mother has 12 kids but a lot of them died,” he said, covering his meal so he could carry it to his family. “There are six of us now and my mom.”

For Maxi and countless others here in Haiti’s pulverized capital, new rules of hunger etiquette are emerging. Stealing food, it is widely known, might get you killed. Children are most likely to return with something to eat, but no matter what is found, or how hungry the forager, everything must be shared.

The communal rationing, along with signs all over the city that say “S O S” and “we need food,” suggests that the food crisis here is growing. In a country where malnutrition was common even before the earthquake, the United Nations now estimates that two million Haitians need immediate food assistance. And despite frantic efforts by aid groups, distribution has been limited. As of Saturday, the World Food Program had reached 207,392 people in Port-au-Prince and 113,313 in other areas.

Compounding the problem, Haiti’s commercial food supply has been strangled by the earthquake’s damage. Fruits and vegetables from the countryside are still available, but in smaller quantities, at inflated prices.

And food imports — typically 48 percent of the nation’s total food consumption, according to the United Nations — have slowed to a trickle.

“The whole food supply chain has been trashed by the earthquake,” said David Orr, a spokesman for the World Food Program. “The port, the roads, the trucks, the whole commercial life of the country has been disrupted.”

It is not, after all, just homes that fell when the earth shook on Jan. 12. Supermarkets have collapsed to rubble. Butchers and bakers are dead.

At the Dimino bakery in Bourdon, a middle class area in the foothills above downtown Port-au-Prince, five people died when the ceiling fell in. The ovens are now buried in dirt. On the floor, plastic foam cakes lie overturned, their cheerful messages made invisible.

A few doors down, Elsie Perdriel cooked up what little she could. Her one-story home with maroon trim survived the earthquake, making her one of the lucky ones. But now she has 20 mouths to feed instead of four: seven children, including her grandson, a few extended relatives, and neighbors who lost their own homes.

It is a miniature civilization focused on food. Every day, one or two people are given the task of buying a single meal for the lot, but the purchases are small because money is tight. Work, a paycheck and disposable income all look a long way off.

Ms. Perdriel, an administrator with the national electric utility, has not heard from her bosses since the earthquake. Her son, Jean Sebastian Perdriel, 30, said his office by the port, where he worked for an import-export company, no longer stood.

“Nobody knows when they’re going to get started again,” he said. “Food, oil, rice, beans, it’s all expensive.”

Ms. Perdriel, a no-nonsense cook with her hair pulled back, displayed a pot with half of a chicken cut into pieces. “This should be for two people,” she said. “Now it will have to do for 20.”

Many other Haitians, while shouting for help in ever louder voices, are finding ways to share. In several neighborhoods of Carrefour, a poor area closer to the epicenter, small soup kitchens have sprung up with discounted meals, subsidized by Haitians with a little extra money. At 59 Impasse Eddy on Monday, three women behind a blue house stirred a pot of beans and rice, flavored with coconut, spices and lime juice.

They started cooking for their neighbors the day after the earthquake. On many mornings, they serve 100 people before 10 a.m.

“Everyone pays a small amount, 15 gourd,” or a little less than 50 cents, said Guerline Dorleen, 30, sitting on a small chair near the bubbling pot. “Before, this kind of meal would cost 50.”

Smiling and proud, the women said they did not have the luxury of waiting for aid groups to reach them in their hilly neighborhood. The trouble was, they were running out of food. They used their last bit of rice and beans on Monday.

Organizers for the group that fed Maxi, part of a government program that previously fed children in schools, also said their supplies were dwindling.

The most wrenching battles against starvation, however, can be found in the camps, the metropolises with tents that would resemble forts for first-graders, if not for the smell of urine.

Maxi lives in the best known of these locations, under a few sheets downtown, near the presidential palace.

The United Nations, the Haitian government and others have delivered food several times there in the past week. Thousands have been served — and thousands more are still hungry.

But at least they get food regularly. A few miles away, at a former military airfield outside the neighborhood of Belair, people still fondly recall the time four days after the quake that a United Nations truck appeared with boxes of fortified biscuits. Barefoot children smiled and packed their “cookies,” as they called them, into dirty T-shirts. An older woman with braids was so thrilled that she sang loudly with her hands over her head, and tried to hug one of the workers.

But that was the last time anyone came with food. Now the planes swollen with aid simply crisscross the sky overhead. The children who used to chase the helicopters hoping they would drop something have given up, as empty biscuit packages now collect underfoot.

Some people, like René Odge, 29, said they stretched the ration for more than a week by breaking the biscuits into small pieces.

But it could only do so much. Mr. Odge held up a green soda bottle. “I put salt in the water and it keeps me alive,” he said. “It keeps my stomach calm until I can find something else.”

Many of the mothers in the airfield said they had eaten only a few meals since the earthquake. Oslaurd Lundi, 25, sitting on the ground near her son Benson, 3, and her 6-month-old daughter, Shaina, listed her recent meals as the sun began to set: “Today, nothing; yesterday, a little bread; and a little bread the day before.”

She could see what she wanted. Just a few feet away, Mary-Claudette Alexi, 35, displayed a few pieces of pork and small breaded pies. The prices were relatively low: less than 15 cents for a small pie. But for Ms. Lundi and thousands of others, the price was still too high.

Categories: Haiti In the news or View All
Return to Top