In conjunction with the Occidental Social Enterprise class under the direction of Professor Sherry Simpson Dean RMF presents the Dream Free campaign which aims to share the stories and dreams of refugee students at Kiryandongo Refugee Settlement in Uganda. This is the first of several stories to follow. 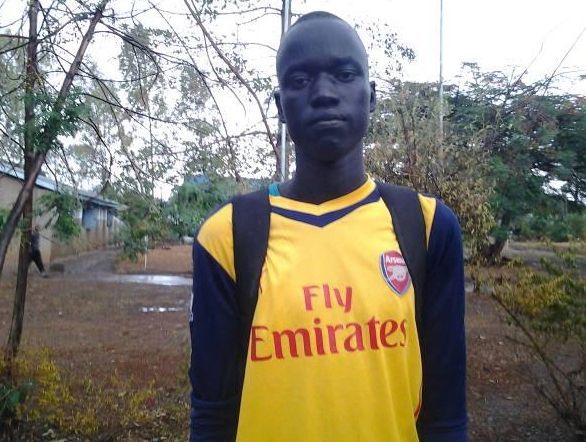 Born in Warrap State and raised in Unity state, Mabil was born to Mr. Mabil Awongdit and Mrs. Nyadeng Ntomachut on March 23rd, 1998. Born as the only boy, Mabil lived with his parents who are members of the Dinka tribe. By the time the conflict in South Sudan broke out in December 2013, Mabil was studying in Pandit Primary School. Here he tells his story: “On that fateful day, I was with my both parents shopping for Christmas of 2013. After the shopping, we were on our way home, we met seven men armed with knives, spears, and guns. They told my father to give them his bag, he refused to give it to them. In the process of taking the bag forcefully from my father, they shot him in the head in front of me and my mother. After shooting him, my mum tried to fight them and she was also shot and also died in my presence. They also wanted to kill me but when they asked about the dead, I denied knowing them though they were my parents. They were Nuer, they engaged in Nuer Language, which I knew and they thought I was a Nuer, and that’s how I managed to escape death. From there I went home but my heart was not settled, I came back as the killers had gone and took my parents’ bodies into the bush and left the bodies there. From there, I became a street boy. One day, we started a journey footing from Juba to Nimule at the boarder of Uganda and South Sudan, walking under harsh weather, it was dry season and very hot, all sunshine on us. When we reached the boarder, I met a policeman who knew me and I told him what happened with my both parents, and where I was heading to. He sympathized with me and gave me 100 South Sudan Pounds which I used to jump on a bus to Kiryadongo Refugee Camp. I am in senior one at Panyadoli Secondary School in Kiryadongo Refugee Settlement. Having moved alone from South Sudan, I am an unaccompanied minor, I live alone. I face a lot of challenges staying alone; from school I have to cook by myself, everything is on me apart from the posho and beans that we get from UNHCR, the rest on me. I cannot help myself with school fees, books, clothing, feeding, above all the trauma I went through seeing my own parents shot dead”.

Mabil’s goal in life is to be a journalist believing that if given the chance he can be able to share with the people true experiences in life and in particular South Sudan, adding that taking on mining and petroleum engineering would be an option since his country is gifted with minerals.

Categories: Refugee Support Uganda or View All
Return to Top