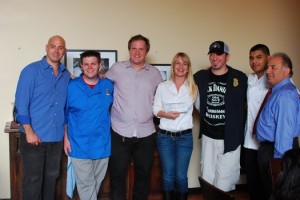 October 21st 2011, I had the privilege of going undercover as a waitress at the highly publicized and anticipated Dionicess IX, a culinary extravaganza which has been appearing on the LA scene for the past 3 years, with all proceeds benefitting charity.

Gev Kazanchyan,a member of the Real Medicine Advisory Board and creator of these events was introduced to Real Medicine 3 years ago through our Armenian Project Director, Nairy Ghazourian.  This introduction would lead to a series of pairings over the next 3 years benefitting our project in Shinuhayr, Armenia. From Dionicess II (which paired Coffee & Chocolate) to Dionicess VI (which paired Beer, Sausage & Fries) all have had rave reviews and have brought much needed awareness and support to our Armenian Projects.

This year’s event  teamed up Gev with Dave Waltrous (Beachwood BBQ & Brewing) , Randy Clemens and Matt Biancaniello featuring “Beer & Booze” with an assortment of vegetarian dishes to compliment each. 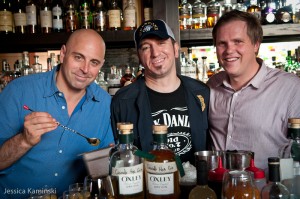 The event was held at the Steingarten LA, which gives you a feeling of times past. Dark woods, a beautiful patio area and an atmosphere of sophistication, were the perfect setting for what we were about to experience. Their extensive menu was hard to pass up, and I enjoyed an absolutely exquisite Wild Boar & Berry Sausage with owner Abraham Berookhim  between seatings.
Matt Biancaniello (voted  LA’s top bartender 2010) was hard at work preparing the garnishes for the cocktails. There was fresh verbena that had been hand picked at 2am, pumpkin infusions, and a rare Belgian elderberry liqueur thathad never seen American soil. International shipping had caused quite a predicament as the precious nectar-of-the-gods had only arrived 2 days prior to the event! 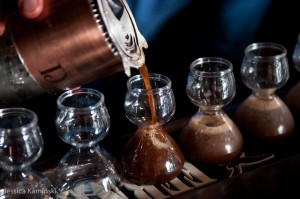 Author and Chef Randy Clemen’s tantalizing vegetarian dishes included items such as the “Taquit-Ohhh Yeah”, a fabulous “Risotto Pop” and myfavorite, “the Hop and the Hound” which had a had a kick stronger than a mule!  Randy’s “Sriracha Cookbook” is
available through Amazon.com and his recipes do deliver a punch! If you like it spicy, this is definitely the crème de la crème of cookbooks!

Having not waitressed since college (we won’t say how long ago that was!), I was a bit nervous-but with the assistance of  Dr. Susan Jarakian & Armenian Country Director Nairy Ghazourian we were well prepared for the days journey. The 1st seating’s attendees consisted of a host of press from a variety of culinary publications, some local and some from as far as Wisconsin.  The 2nd seating was primarily comprised of Gev’s cult following, this being his 9th highly anticipated event which each year sells out within days of its announcement.

This year’s event raised over $1,400 for our project in Shinuhayr ,Armenia which supports 8,000 people from surrounding villages and is the only access to medical care in the region. Last year, we were able to provide food and clothing to sustain families through the brutal winter months as well as providing the region with an ambulance equipped with emergency supplies.

A huge Real Medicine thank you to all that helped to put on this year’s event! To read more about Dionicess IX please go to:

DionicessIX: Combining Craft Beer & Cocktails for Charity and to be added to the
main invite list for future events please send a simple email request to: dionicessgigs@gmail.com.
For information about our Armenian Project and how you can help support the families through this year’s winter please go to:

RealMedicine Armenia or directly to our donor page here.

Categories: Armenia Events Los Angeles Thank You or View All
Return to Top