It is with relief and pride that we read the results of the South Sudanese referendum vote for independence from the North. Our project in Sudan , the new Juba College of Nursing and Midwifery, was directly impacted by the ability of the referendum to be carried out peacefully and with positive results for the South.

Our staff in Juba is now busy again as the first class of 40 students gets started on their second semester of Nursing and Midwifery programs.  There is still much to be done to assure the College is well funded and sustainable, but the biggest hurdle of uncertainty has been overcome with the successful referendum results. 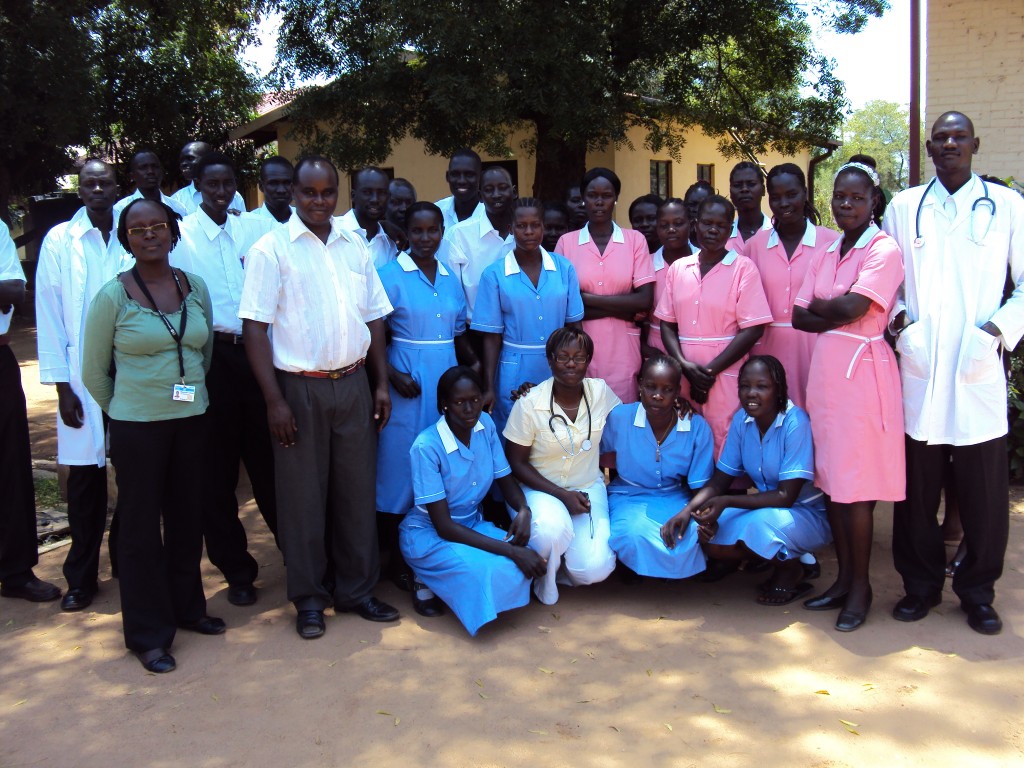 photo: Our staff and the first class of Nursing & Midwifery Students
Below are a collection of articles about the referendum results sent to us by our United Nation program partners in Juba:

Sudan Radio 8/2/11 – Sudan’s Council of Ministers held an emergency meeting yesterday and endorsed the referendum results which were released and accepted by the President Al-Bashir the same day.

President Al-Bashir, addressing the meeting pledged efforts to resolve remaining CPA issues and promised to assist the South to build its state.

GoSS President Kiir said recognition of the southern state by the North would pave the way for international recognition of the newly-born country. He said secession of the South does not mean the end of the road; instead the two countries would build strong relations. He said he would tour many countries of the world to urge them to lift sanctions imposed on Sudan including lifting its name from the countries sponsoring terrorism.

Kiir, however, urged speedy resolution of the outstanding CPA issues before July.

Reuters 7/2/11 – Sudan’s president on Monday said he accepted a southern vote for independence in a referendum that is set to create Africa’s newest state and open up a fresh period of uncertainty in the increasingly volatile region.

"Today we received these results and we accept and welcome these results because they represent the will of the southern people," Bashir said in an address on state TV.

Hundreds of people started gathering in the blistering heat of the southern capital Juba on Monday to celebrate the official results.

Sudan Tribune.com 6/2/11 – The GoSS has started making preparations to declare its independence, following the overwhelming vote in favor of secession in last month’s referendum.

GoSS president Salva Kiir Mayardit has issued a presidential decree forming a high level committee chaired by Vice President Riek Machar Teny to prepare the nation for the declaration and celebrations of independence due on July 9.

Machar’s committee will choose the venue for the declaration, prepare the budget for the event and send out invitations to dignitaries around the word.

AFP 7/2/11 – US Secretary of State Hillary Clinton on Monday welcomed a historic referendum granting independence to southern Sudan and said the United States was initiating the process of removing Sudan from its terror blacklist.

Clinton congratulated Sudan on the "peaceful and orderly vote" and pledged to improve ties with the Arab-dominated government, hailing it for accepting the referendum that showed nearly unanimous support in the South for secession.

"We urge both northern and southern leaders to continue to work together toward full implementation" of the 2005 peace deal that led to the referendum, Clinton said in a statement.

Clinton said US officials "urge them to work expediently to reach agreement on the post-referendum arrangements that will define their future and lead to a mutually beneficial relationship."

Clinton said that the United States was "initiating the process" of removing Sudan from a blacklist of nations that sponsor terrorism.

"Removal of the State Sponsor of Terrorism designation will take place if and when Sudan meets all criteria spelled out in US law," she said.

"This is a historic moment for Sudan," Ashton said in a statement, hailing the "peaceful and credible" conduct of the vote.

"The EU fully respects the outcome of the referendum as a true reflection of the democratically expressed wishes of the people of Southern Sudan," said the 27-nation bloc’s chief diplomat.

"The EU looks forward to further developing a close and long-term partnership with Southern Sudan which is set to become a new state once the CPA (Comprehensive Peace Agreement) expires in July 2011."

Ashton said the EU would continue to support efforts to reach an agreement on all outstanding issues between the two sides and find arrangements "that will sustain the North-South relationship in the long term."

"The EU remains committed to engage both North and South Sudan in the promotion of democratic governance, respect for human rights and a peaceful and prosperous future for all Sudanese people," she said.

"In this context, the EU will step up its dialogue with both north and south and is ready to play its part in underpinning the development of two viable states."

Categories: In the news South Sudan or View All
Return to Top