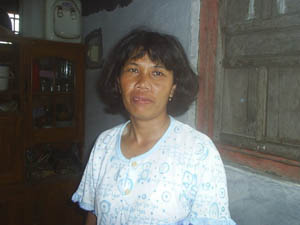 Mrs. Marsiyem is a traveling bread seller in her home town of Birit Village, Indonesia.

Early in the morning she buys baskets of unbaked breads from the market and spends the rest of the day distributing them to different warungs (small restaurants). It is hard work but she is thankful to have it.

In 2008, when the community savings project began, Mrs. Marsiyem signed up along with the rest of her family and after receiving the initial load of 200.000 rupiah, she was able to start her business.

Now, in 2009, after being with the program for over a year, she has  gone from selling only 2 baskets of bread to selling 11. The loans have also allowed her to purchase different kinds of breads in over 15 varieties that were at one point too expensive. With her business thriving, she is able to make as much as 700.000 rupiah a day.

Mrs. Marsiyem is so enthusiastic about the growth of the community savings project that she now holds a seat as a chairperson in the community savings group. As she has experienced it first hand, she knows the loans have the potential to lift  her community out its impoverished state by giving people the means to help themselves and her hope is that it will be sustained over the years to come.