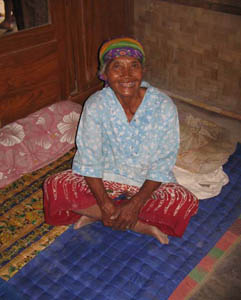 “Nice to meet you, I am called Grandmother Harto.”

Grandmother Harto, a 65 year old widow and mother of five, is one of the thousands of people still affected by the devastating 2006 earthquake in Indonesia.  However, thanks to the Community Savings Project: The People’s First Endowment, she is also one of the many people who have been able to rebuild their homes and their lives.

“In a disaster like this one we are all concerned about the wishes of the Great Power. We mere humans cannot know what we must do.”

When her house succumb in the tremors of the great earthquake, Grandmother Harto’s future was uncertain.

For awhile she moved from house to house, staying with her children but as they too live in poor condition she decided to remove herself as a burden on her family and live in a tent where she stayed for over a year.

She has since moved into a temporary structure made of woven bamboo, where she lives with one of her grandchildren and four goats, but as she puts it, “it is not a proper home.”

“We accept the grant only because we need the help.”

Before the earthquake Grandmother Harto had started a small business but with the added construction costs, she was unsure if she would be able to keep it running. With the help of the community  loans, she has been able to keep everything afloat for herself and her family, but she is careful to take only what she needs, knowing the rest will go to her community.

Though life is still chaotic and many around her are still unable to rebuild, the Real Medicine supported First Endowment program has given her at least some semblance of certainty for the future of her family.

For more information about RMF in Indonesia, or to donate directly to this cause, please visit the Community Savings Project Initiative Page.