Be the Change you Wish to see in the World

On Saturday October 2 India celebrated the 141st birthday of Mahatma Gandhi.  This day is a public holiday in India, but as usual, the RMF India team didn’t take the day off.  We are always inspired by Gandhi’s famed quotation “Be the change you wish to see in the world,” and decided to honor this inspiring leader’s birthday not with talk or taking a holiday, but with action. 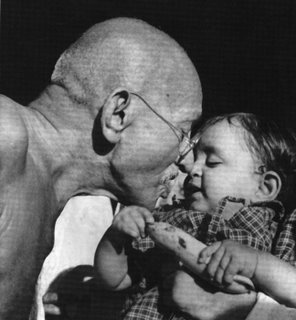 At RMF’s behest, the Jhabua District Collector (in-charge of the district) called Jhabua’s first ever Nutrition Rehabilitation Center Review Meeting on October 2nd.  The Collector called together all the NRCs in Jhabua district to discuss challenges, lessons learned, and best practices across the 4 NRCs in the district, including Real Medicine Foundation’s NRC at Jeevan Jyoti Hospital.

For a year before starting our NRC, RMF staff had been visiting NRCs across India and researched their functioning globally.  We had a pretty good idea of how an NRC should be run, how one shouldn’t be run, and had lots of suggestions for improvements.  We realized though that to really create lasting change and workable reforms in NRCs we had to become part of the system and create change by setting an example.  We knew that the most valuable lessons are learned by doing and that by running our own NRC and documenting our processes well we would be more able to contribute to developing best practices in NRCs.  We started our NRC not only to serve the needs of the children in Meghnagar block where we are based, but also to be able to bring up the other 254 NRCs in the state by example.

We’ve already made some big progress in this arena.  We’re helping the state government to procure better nutritional products for the states’ NRCs and have given numerous policy recommendations, backed with evidence from our NRC, which have already been applied across the state.

This meeting was another step to “be the change.”  Our immediate goal is to not only make our NRC a model center, but also to bring up all the NRCs in our district so that Jhabua District can become a model district for the rest of the state.  We led the meeting by sharing our challenges and questions with the group and, in a system which encourages inflating numbers, honestly shared our data.  We learned from the experiences of other NRCs and had a lively debate about interpretation of policies and protocols with the doctors and NRC in-charges from across the district.

The meeting ended with a series of directives from the Collector on the individual improvements centers should make and how we would all work together with the Department of Women and Child Development on following up with cases to prevent relapses.  We’re developing a list of critiques and clarifications to submit to the central government together as a district so that it’s not just RMF’s voice, but a unified voice of practioners on the ground who are calling for change.

Categories: India Whole Health or View All
Return to Top