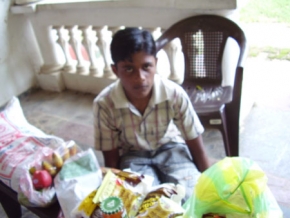 Tharindu Hasanga is an active boy. He is fifteen years old now. He goes to Seenimodara Junior School in Tangalle in Hambantota District. He lost his mother in the tsunami of December 2004, and now he and his only sister live with his aunt, Mrs. Jenita Muthumala. After this sad incident, Tharindu's aunt takes good care of Tharindu, because his father had married again.Tharindu is in tenth grade. He does his studies well. He likes to play with other school boys. He now, with the treatment, feels much better and not as tired anymore as he did before we started his treatment. He loves to ride his bicycle. That is one of his favorite hobbies. He is very happy to do that. 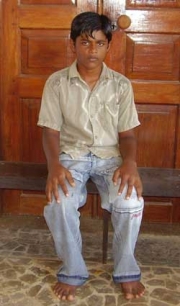 His most recent blood report is from January 2007. And he had gone to the clinic for his medical treatment on the 19th of December. The clinic at Karapitiya in Galle always issues his medicine for two months. Prof. Sujeewa Amarasena, the head of the Department for Pediatrics, oversees Tharindu's treatment. His treatment is very expensive. Tharindu's family is too poor to bear those expenses. Thanks to Real Medicine Foundation, Tharindu receives treatment.

The two kinds of tablets include a vitamin tablet, which he has to take in the morning after his breakfast. The second one controls his cholesterol level, he has to take this one at night after dinner. Tharindu does not miss his medicine. He had many visible fat deposits. Now they are disappearing. Special food is prepared by his aunt for Tharindu without using coconut milk. He likes to eat Dhal Curry very much. For lunch everyday, he has this Curry. The food parcel he receives from Real Medicine Foundation provides most of the food he needs for the month. It includes Dhal, many kinds of grains, and fruits and vegetables.