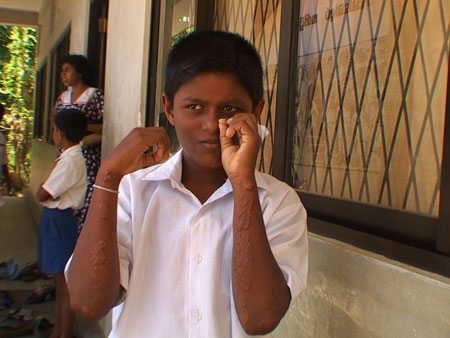 Tharindu Hasanga was presented to us in February 2005 at our Children’s clinic in the Mawella camp in southern Sri Lanka by one of his teachers at the Seenimodara Junior School in Tangalle. Tharindu was a 13-year-old boy at that time, suffering from Familial Hypercholesterolemia (FH). Sadly, he had lost his mother, Malani Muthumala, in the tsunami, and his father, M.P. Chandana, a fisherman, was beside himself with grief over his loss. Tharindu’s aunt, Ginta Muthumala, had taken on guardianship for him.

FYI: Familial Hypercholesterolemia (FH) is an autosomal dominant disorder that causes severe elevations in total cholesterol and low-density lipoprotein cholesterol (LDLc). The total and LDLc levels of infants and children with homozygous FH are higher than 600 mg/dL. This leads to plaque deposition in the endothelium of coronary arteries and to premature coronary artery disease. Early corneal arcus is frequent as well as valvular abnormalities, most frequently aortic stenosis. Severe and widespread atherosclerosis can affect all major arterial beds, including the carotid, coronary, femoral, and iliac. Children are at risk for extremely early coronary events. Sudden death or acute myocardial infarction may occur in patients as young as 1-2 years. Without heroic interventions to lower blood cholesterol levels, survival beyond young adulthood is unlikely. Cholesterol also accumulates in other areas, particularly the skin, causing xanthelasmas and a variety of xanthomas. Planar, tendon, and tuberous xanthomas are present early in childhood and sometimes at birth. These patients commonly have symptoms consistent with ischemic heart disease, peripheral vascular disease, cerebrovascular disease, or aortic stenosis. Patients may have articular symptoms such as tendonitis or arthralgias.

Real Medicine decided to support Tharindu’s medical treatment with lipid lowering drugs. His treatment is overseen by Prof. Sujeewa Amaresena, the Head of the Department of Pediatrics of the University of Ruhuna in Galle, who generously offered his support.