Project Goal:
To provide long-term comprehensive health assistance to the people in the province of Pisco (pop: 125,000), specifically in the district of San Clemente (pop: 30,000).

Project Objectives:
1 – Treatment of acute and chronic illnesses in the urgent care center “Policlínico Peruano Americano.”  San Clemente is a very impoverished area and all services are offered free of charge. Much attention is given towards prevention and health education within all facets of the clinic´s operation.
2 – To improve the comprehensive health of the community through outreach programs, educational programs, and public health initiatives.

• We received a visit from RMF volunteer Jana, a RN who was a great help at the Policlínico.
• We hired a new lab technician, Srta.Tatiana.
• Both July 28 and 29 were non-working days as they were national holidays.
• Three Pap smear campaigns were conducted.
• We conducted a preventive health campaign in the town of Cleto Rojas, San Clemente on July 22.
• The nursing team led a nutrition campaign at a school in San Clemente.
• Dr. David took the month off, substituted by Dr. Angel.
• We contacted a technician to request a proforma purchase order for the compressor and dental unit installation.
• August 30 was a non-working day.
• September 8 was Pisco Day, a non-working day.

2)  Campaign
• A total of 40 patients were attended to in our Pap smear campaigns.
• A total of 114 patients were attended to in urinary infection and dental preventive campaigns.
• A Malnutrition Prevention Campaign was conducted on August 31, 2011 at the Villa Esperanza School in San Clemente in coordination with the teachers; that day 65 children from preschool through 6th grade of elementary school were weighed and measured with help from the teachers.
• We conducted a follow-up meeting with the parents to inform them of their children's nutritional status. 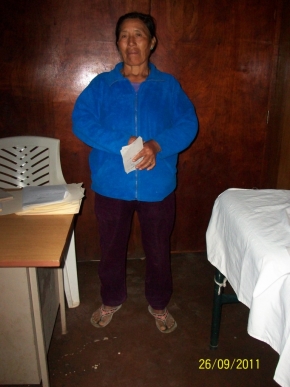 Patient Apari Victoria Ore (photo above), age 57, was born in the province of Victor Fajardo, Department of Ayacucho. She only studied up to the second grade of primary school as she and her two sisters supported their parents by working in the fields. Her family was displaced by terrorists demanding "protection" money and they eventually settled in San Clemente-Pisco and began growing cotton. Here she met the man who would father her 4 children.

The relationship began well, but her partner later became physically abusive, so she went her own way and worked hard to bring up her young children. Unfortunately, their precarious financial situation did not allow her oldest children to attend college and they in turn formed families of their own at a young age and have their own financial needs. However, she strives to help her youngest son who is pursuing a technical degree. She works from 4:00 am until 4:00 pm in the fields, often not eating properly. She came to RMF’s Policlínico Peruano Americano where she received care after a diagnosis of acute gastritis and gonarthrosis. She is thankful to RMF and the Policlínico Peruano Americano for assisting her as she does not have the financial means to seek healthcare. 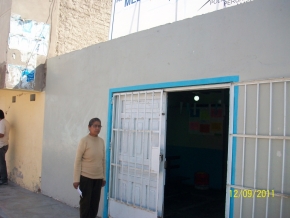 Mrs. Felicitas was born in the district of Chincha – Ica. She only studied up to third grade, her father did not want her to continue her studies and preferred that his children help him by farming. She arrived in San Clemente when she was 15 years old, working in the fields. Here she met the man who would father her 2 children, from whom she would later separate due to his infidelity and physical abuse, devoting herself entirely to raising her children despite never receiving support from her former husband. She is the sole breadwinner for her family and works until 6:00 pm, leaving her children in the local daycare. Regrettably, not having enough time to care for her children due to her long work hours resulted in the death of her youngest daughter at 18 months from pneumonia because she failed to recognize the early signs and symptoms of this disease.
She then devoted herself to her surviving son, supporting him while he pursued a technical career.

Unfortunately, although her son completed his degree requirements, he could not get his diploma due to administrative costs. Her son is now working as a driver on a casual basis, but his salary is barely sufficient.

Her adobe home collapsed due to the Pisco earthquake, and to this day, Mrs. Felicitas, her son Javier, her daughter-in-law and her two grandsons, live in a wooden module and another room that is only protected with plastic. Furthermore, she is not being paid the retirement pension she is entitled to after working 18 years for an agricultural firm, and rectifying this situation remains an ongoing struggle. She is very grateful to RMF because their team not only helps by providing healthcare for her, but also for her entire family.