During the October-December quarter, our staff in San Clemente has stayed busy through the holidays treating just over 60 patients a day. This quarter we received a total of 3,751 patients, a 368 patient increase over last quarter, 534 of which were new patients. We continue to make favorable experiences creating co-responsibility in our patient population through small and affordable charges to the patients that are able to afford payment. 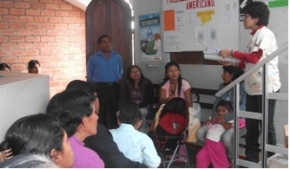 This quarter the clinic held several community engagement programs and collaborated with a handful community health and education institutions to organize a parade aimed at spreading knowledge and awareness about the HIV/AIDS virus.

On October 1st we were invited to a meeting organized by the Perspectives and Voices Association, which has been carrying out many activities related to the education and prevention of the HIV/AIDS virus, along with the Red Cross, San Juan de Dios Hospital, the Ministry for the Defense of Women, and several other public entities. The purpose of the meeting was to watch a presentation given by Promoters PVVS (People living with HIV and those that live with them) of Pisco and to organize joint action from those institutions working in the field.

Dr. David Torrealva received recognition and appreciation, as did RMF for the support and treatment that we have provided to people living with HIV/AIDS. All of the parties at the meeting are committed to getting those living with the virus treatment in health institutions without facing discrimination. Though there are laws in place against this type of discrimination, it is up to us to make sure that they are not violated. We also received information packets on HIV that we will distribute at our clinic.

Following this meeting, our clinic collaborated with several community organizations to hold a parade in Pisco in order to bring attention to the International Day to Combat HIV/Aids.

On December 23rd the clinic held its Chocolatada party, and with the support of friends, family, and RMF, they gave out toys and sweets to over 150 children. They put on a play and had their own Santa Clause and everyone enjoyed watching the children have good time. In addition to the toys we passed out, we held a drawing for a toy laptop that one child won. Some of the mothers even shed tears when they thanked us for the event.

Introducing the Clinic’s Newest Team Members, in their own words:

My name is Mayra Yanina Velásquez de la Cruz and I am a nursing assistant for the Policlínico. I was born on February 4, 1985 in the city of Pisco. My parents are Leónidas Velásquez Fuentes and Juana Rosa de la Cruz Cartagena and I am the second of four children. I currently live in the San Andrés provence in Pisco. I began my education in elementary school at Inmaculada Concepción and continued my studies at Elias Olivera Renan secondary school, both located in the district of St. Andrew. I completed my higher education at the Technological Institute of Pisco, where I studied to become a nurse’s assistant.

I choose to work in the healthcare profession because I wanted to be able to help people. I started working as a volunteer at Santa Cruz Health Center in the district of Paracas. In 2006, I was hired by the Clinic CASTAÑEDA, which gave me a great opportunity to gain experience. In 2007, I started working at the Health Center of San Clemente where we provided medical aid and care to the community after the disaster had occurred. Then, I was hired by the hospital San Juan de Dios de Pisco where we worked to treat patients that had been injured by the earthquake during the state of emergency. That unforgettable experience and the satisfaction that I got from helping my community and my people in times of need reaffirmed my decision to pursue a career in health care. In January of 2009 I returned to work at the Castañeda clinic.

In April 2010, I was hired by Real Medicine Foundation, Peru, where I was welcomed with open arms. I am very happy to be able to use the knowledge that I have acquired over the years to help the citizens of San Clemente, a region that has widespread, extreme poverty. It is only with the help and support of humanitarian aid and nonprofits like Peru Real Medicine Foundation that this region can continue to combat childhood malnutrition. Thank you for giving me the opportunity to participate in a project that works to take care of the community of San Clemente.

My name is Victoria García Sotelo and I have a pharmaceutical chemistry degree from Universidad Nacional San Luis Gonzaga de Ica. I live in Ica and I have worked at the Policlínico for over two years. My time working for the Policlínico has been an incredibly important experience in both my personal and professional life because it has allowed me to observe firsthand the needs and struggles of so many people. Thanks to the unconditional support of Peru Real Medicine Foundation – San Clemente, I am very happy to play a role in the work that we do to meet the needs of our mostly low-income patients and members of our community.

Pujado Márquez Nicasio Lucio, 49 years old, was born in Pisco and has lived in San Clemente since childhood. Pujado works as a farmer and has five children: Mary 19, Carmen 17, Edgar 15, Beatriz 12, and Tania 6. Pujado’s wife, Nave Beatriz Flores, died on June 7, 2008 in a traffic accident while on the way to visit her mother in Abancay with her youngest daughter Tania. Luckily, Tania only suffered a broken tibia and was rushed to an emergency room in Cuzco; however, she was the only survivor of the crash. After the accident, Pujado returned to San Clemente to care for his children, though Tania required much of his attention. Pujado is the sole income earner in the household and is especially dedicated to caring for his younger children.

Pujado learned of the Policlínico from his uncle who suggested he bring Tania in to see a doctor because of a fever that she had developed. Dr. David Torrealva saw and treated Tania several times until she recovered from her fever completely. Pujado and his family have expressed much gratitude to clinic and to RMF for helping them despite their difficult economic situation. They would like to thank all of the people at the clinic and at RMF who have come together to provide unconditional aid for so many people and families in need.

Maria Apari Ore, 63 years old, and her husband Casiano Noa Palomino, 70 years old, are natives of Ayacucho-Cayara and have lived in San Clemente for the past 30 years. Maria and Casiano have struggled financially throughout their lives, but in addition to their economic woes they must care for their disabled daughter Gladys Esther Noa Apiri, 49 years old. 11 years ago Gladys was in an accident that fractured her spine and left her paralyzed from the waist down and wheelchair bound for the rest of her life. This case is quite moving because despite her parents advanced age they continue to care for their daughter, hoping that one day she will be able to walk again. However, Maria and Casiano are often saddened by the thought of what will happen to Gladys once they are no longer around to care for her. Though, in the midst of this sadness a light has shined through on to their family. That light is the attention and care provided by the incredible team of doctors and staff at our Policlínico Peruano Americano in San Clemente for economically strained patients like Gladys.

There are many cases just like the Noa Apari Family’s, but thanks to Real Medicine Foundation for providing care through the Policlínico Peruano Americano, the citizens of San Clemente have access to the selfless support of all those who make the clinic possible.

Lucila Huaman Laura is 45 years old, and a regular patient at our clinic. Lucilia has had an epileptic condition as a result of pregnancy related hypertension for the last 30 years, and therefore experiences daily seizures. Although her seizures occur frequently, they generally occur at a low intensity. Nonetheless, Lucila’s seizures do cause her to suffer from memory loss. About a year ago, Lucila lost her mother to bone marrow cancer, and has since dealt with serious bouts of depression and thoughts of suicide. Then, 6 months ago Lucila was diagnosed with having a tumor on her right leg. With great effort from the medical staff and with Lucila’s courageous cooperation, a biopsy was performed and the tumor was deemed benign. This month, Lucila was treated for depression, moderate anemia, and chronic gastritis due to Helicobacter pylori. She received the appropriate treatments and sought support and counseling from our staff as well from her relatives. After ten days of counseling and treatment Lucila has made great progress, displaying good spirits and improved health.