We opened the doors to the Policlínico Peruano Americano in its permanent location on December 10, 2007. We had an inauguration that was attended by the residents from San Clemente, government officials, all of our friends who have helped us out along the way, hospitals administrators from hospitals in Lima, and a national news team that provided coverage of the story.

The permanent location is an earthquake safe house with several rooms for exams, a large waiting area, a kitchen area which will eventually be used for a lab. The whole house had been renovated and converted into a clinic just before the inauguration. An addition to the clinic is also being constructed where we will have two additional exam rooms, a larger open-air waiting room, and a garage to house an ambulance.

The long line of patients starts to form 2 hours before the clinic opens in the morning. Since December, the clinic has average 31 patients per day. Some days, the number of patients exceeds 70. It is now the middle of the winter and people are more reluctant to leave their homes and travel to the clinic despite their ailments. The patient flow will pick back up as the weather improves. To date, 4750 patients have received medical attention at the clinic.

The most frequent cases are respiratory related, accounting for close to 50% of the cases. This includes laryngitis, bronchitis, asthma, allergies, etc. After respiratory, the most common disorders each accounting for approximately 10% are muscular, skin, digestive, and intestinal (parasite) disorders. 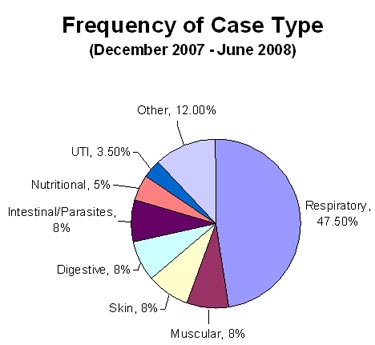 Maria Elisa has continued her work as the school nurse at José Carlos Mariategui School. This school has 3600 children. Since December, 1100 children have paid a visit to the school nurse. In addition to treating the children, Maria Elisa is responsible for promoting education and prevention through a series of presentations in the classrooms. Some of the first presentations included "How to Wash Your Hands!" and it was aimed at 1st and 2nd graders. The children also serve as a conduit to their families where the Policlínico Peruano Americano receives additional exposure. We have reached out to over 2000 children through various educational workshops. The inclusion of the school nurse at Jose Carlos Mariategui School has been a tremendously successful program.

The clinic team has been busy conducting medical RMF Campaigns. There are many emerging communities around San Clemente that do not have access to healthcare. After the earthquake, a group of 50 displaced families from Villa Tupac Amaru set up an albergue in the plaza de armas of La Villa. Eventually, the town tried to get them to remove their tent city from the plaza de armas…but…the group formed an association called Nuevo Horizonte. They became organized and registered themselves as a new community. They did leave the plaza de armas in the fall and resettled (aka squatted) on some other land on the outskirts of La Villa. Since they are a registered association of 50 families it is very hard for the rightful owner of the land to kick them out without extensive legal action. But…you know, these people have lost their homes and they have nowhere to go. Their settlement does not have electricity, water, or roads…and the community has been growing. They approached the Policlínico Peruano Americano with a written inquiry as to if we would be willing to visit the settlement on a medical campaign. We did. The doctors treated 41 patients.

In the following months, the clinic team traveled to three very impoverished communities on the outskirts of San Clemente without access to healthcare. During these RMF Campaigns, the clinic team was able to attend to over 1200 patients in total.

At the Policlínico Peruano Americano, education and prevention is incorporated into all facets of our work. Not only do the physicians educate the patients and promote prevention during the consultations, but we hold workshops to teach various subjects. The nurses take turns throughout the week delivering presentations to the patients waiting in the waiting room. They present on such topics as Parasitology, Basic Sanitation in the Home, Urinary Tract Infections, etc.

A program has been initiated at the Policlínico Peruano Americano and at Jose Carlos Mariategui School where data is collected about the overall nutritional health of the patients. We seek to identify the members of the community who are malnourished, obese, health, and at risk for nutritional disorders. This data will be used to more effectively target the members of the community in a community-wide nutrition improvement program.

We have been offering psychological therapy services at the clinic. Trained therapists from the Burners, an international relief organization with a presence in Pisco, have been volunteering at the clinic to help many people who have lost loved ones in the earthquake. Emotional trauma often slips under the radar untreated in a post-disaster area yet it is one of the most important elements to address. The program has been received favorably.

We just received word from our friends at Direct Relief International (www.directrelief.org) that they will be purchasing $10,000 worth of equipment in Lima for the Policlínico Peruano Americano. Among the items to be purchased, we will be buying a Doppler and a Fetal Monitor so that we can expand our maternity services. Pregnant mothers arrive at the clinic and we usually have to send them to the hospital where they have more resources. The Doppler and Fetal Monitor will help us attend to a larger variety of cases so we no longer have to direct pregnant women to the hospital for treatment. In addition to the Doppler and Fetal monitor, we will be purchasing:

Other news at the clinic: