Dust – Everything in Pisco is covered in dust. So much dust has been generated in Pisco due to the many collapsed buildings. Sometimes when walking around, you find yourself in a haze of dust where your entire surroundings appear cloudy. It's also not very comforting to know that you are breathing the dust. Many people wear a mask over their mouths to filter the dust. We have been told that many people are suffering from respiratory ailments brought on from the dust and I expect that many cases at our clinic will involve respiratory sicknesses.

Jitters – It is no surprise that the people in Pisco are on edge following such a catastrophe. On a few separate occasions, large trucks have rumbled by and the people's hearts skip a beat as they think another earthquake is upon them. One teenager named Pedro was listening to Rene's ipod and a truck drove by. Before I even noticed the truck, Pedro had already stripped the ipod from his ears and he was half way to the door, full of fear. These people have seen carnage which I hope they never have to experience again. I imagine they will live in fear for the next few years.

School – Even though Pisco looks like a WWII war zone, everyone has done their best to resume to normalcy. The kids have all returned to school. Classrooms were some of the first structures to be rebuilt. They are merely cabins made out of plywood, but they serve their purpose. All of the school children wear very clean uniforms and it is amusing when school is let out and the children flood the streets.

Peru – San Clemente We met with an engineer with ACER who showed us some potential lots in the town of San Clemente which we could use for our clinic. It's looking more likely that we will be setting up shop in San Clemente. This town is about 6 km from Pisco along the major coastal road. They were very affected by the earthquake and it is actually a more impoverished area than Pisco. 25,000 people reside in San Clemente and the area is growing rapidly. They are very much in need of healthcare. San Clemente can be easily accessed by residents from Pisco who are looking to receive our free services. In addition, San Clemente is gateway into Huancavelica. Huancavelica is a mountain state and they currently do not have any healthcare at all. People are trying to make the journey down to San Clemente by foot to see a doctor and they are dying along the road. Normally, the trip is 3 hours by car from San Clemente. We told ACER that we could set up an outreach program to train local people from different communities in Huancavelica to administer first aid…and to also identify those cases that need advanced treatment. We will then pay to have people transported down (or pick them up in our ambulance) to our clinic in San Clemente where they can receive further treatment. Our location and partnership will most likely be finalized next week, but this situation seems ideal. 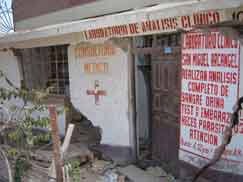 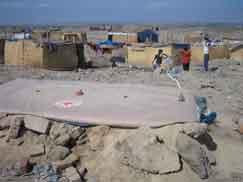 We are also looking forward to collaboration with PAMS (Peruvian American Medical Society). PAMS is an American NGO working in Peru doing very similar work to RMF but on a much larger scale. They are planning to build a medical complex, probably in Pisco, with Peruvian and American specialists such as OB/GYN, Radiologists, etc. Our clinic will be affiliated with the PAMS clinic and it will serve as a place we can refer our patients for x-rays or advanced procedures that we are not equipped to handle. It will also expand the reach of PAMS/RMF services as the 2 clinics will be in different locations near Pisco and will be able to service a larger population of people.

Yesterday morning, we participated in a distribution. Tzu Chi had plans to distribute a 110 lb sack of rice, mattress, bag of beans, blanket, and cooking oil to each of the 2000 families that live in the San Andreas district of Pisco. It is more manageable to help everyone in a single designated area versus helping a few people all over town (and riots can be avoided).

We left at 6am on the bus with 40 uniformed Tzu Chi volunteers from Taiwan, Province of China ;US, Peru, Paraguay, and Argentina. The distribution took place at a fish factory in San Andreas. When we arrived, many residents were already there to welcome us. After a 45 minute ceremony, the distribution began. They would allow about 60 people into the building at a time…they would be given their goods…then we would help them out with their rice as they exited the back door of the warehouse. Most of these people don't have cars so eventually taxis started to arrive and they were charging a premium to cart everyone's goods to their house. People were sharing taxis and mattresses were piled on top of the cars. Even the little motor taxis (which are basically like scooters that can fit two people) somehow figured out a way to also fit a few bags of rice and actually strap several mattresses on top.

More and more families would gather outside with their goods without transportation. It became very crowded. Rene spent the majority of his time outside helping the people with there rice to the taxis. He was doing a great job a directing traffic and making sure people moved their goods to the side of the road so the taxis could get through. There were also a few hundred people outside near the exit who did not live in San Andreas and therefore were not eligible to receive the rice. Mothers, children, and men would surround me every time I went outside and plead for food…or ask me how they could get inside. I got used to saying "Solamente estoy ayudando otra organizacion. Hable con los chinitos." I am only helping another organization. Speak with the Chinese people. It was sad to see. I don't blame them. They are hungry too…but this is not a problem that will be solved over night. It will be a long time before everyone is helped.

I liked helping the mothers out with their rice because I would talk to them about their children…with their rosy chapped cheeks. It gets them to open up a bit and sometimes I would take a picture. Everyone who actually received their goods where very appreciative. One woman even started crying because she was so thankful for our support. The people who were not eligible, however, were getting more frustrated. Eventually, people started receiving goods with false tickets and the police shut the operation down because the scene outside was getting hostile. At the end of the day, I was worn out…and very sunburned. I must've moved close to one hundred 110 lb bags of rice. My whole body ached and I started to shiver even though it was very hot out. I knew I needed to rest. That night a slept for 17 hours and I feel much better today! Helping out with the distribution was a great experience for both of us. I am glad we were there to help out Tzu Chi so we can live up to RMF's motto "Friends Helping Friends." We all have the same goal so collaboration between organizations is very important. We will be relying on help from other organizations during this entire process so what goes around, comes around.