Rene Castillo and I are working to open a free medical clinic in response to Peru’s 8.0 earthquake on August 15. Reports indicate that close to 1000 people have died, many more were injured, 40,000 families left homeless, and many thousands of buildings and infrastructure were destroyed in the Ica region. The epicenter was in Pisco and the surrounding towns of Ica, Canete, and Chincha were also affected.

We arrived into Lima on Friday night, October 12th. The majority of the weekend was spent meeting with our contacts in Lima and networking as much as possible. Most people do not speak English at all and my Spanish is not very good. As a native born El Salvadorian, Rene is fluent in Spanish so he has handled the majority of the conversations. Initially it is a networking game. We have many contacts and they may be able to provide us with additional names of people who can help. As the networking base grew, we eventually were put in touch with people and Peruvian organizations in Ica that may be interested in our project.

On Tuesday morning, we were escorted down to Chincha by one of the Chincha District mayors. Chincha is one of the areas affected by the earthquake. We realized that he is really lobbying for our support. We will be spending more time in Chincha this coming Monday to assess the damage. We continued on from Chincha an additional two hours to the town of Ica where we had hotel reservations.

The landscape on the way to Ica surprised me. Sand dunes. This entire area along the coast is mostly desert. We checked into our hotel and met with a lawyer from Ica who we had been put in touch with. The lawyer introduced us to his brother, a Doctor…Dr David Torrealua, who also happens to be part of a Social & Economic NGO in Pisco called ACER. I will come back to ACER later. On Wednesday morning, we met at 8 am in Pisco for a meeting hosted by the United Nations. 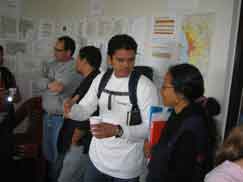 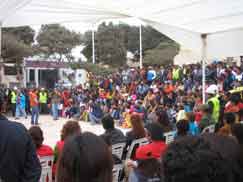 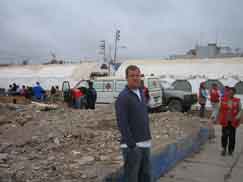 Representatives from the majority of the NGOs attended the meeting and it was to bring each other up to speed about each of their humanitarian endeavors in Pisco. Rene introduced (in Spanish) our project to the group. Also at the meeting were Red Cross, Doctors without Borders, UNICEF, OXFAM, and many other organizations from around the world. It was a great place to network and to discuss each other’s efforts.

At the meeting, we met a representative from Caritas Del Peru named Sandy. They are a Peruvian Christian organization and they are very much involved in distributing tents, blankets, food, clothing, etc to the earthquake victims. Sandy showed us their warehouse and we helped the workers stack some pallets with food to be distributed. Sandy then led us throughout Pisco.

Have you ever seen Saving Private Ryan? Do you know the last battle scene when they are trying to protect the bridge? That is the scene that Pisco reminded me of. 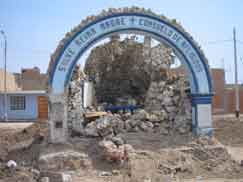 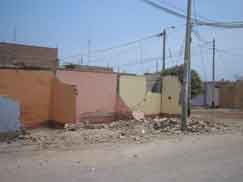 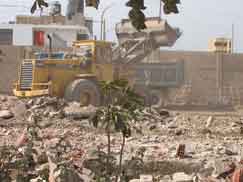 There are piles of rubble everywhere. You could see collapsed buildings everywhere you look. There are many buildings still partially intact but people have vacated them because the buildings have been rendered unsafe to live in. Life in Pisco goes on, however. The streets, filled with rubble, are also filled with taxis, trucks, people, vendors, and those small rickshaw-type scooter taxis they seem to have in every country. You can hear workers breaking down walls, construction equipment, and vendors selling their goods. Most people now live in single story homes/shacks or in one of the many tents that have been provided by different relief organizations. We were shown a church at the Plaza de Armas that has been completely destroyed. Across the street is a vacant lot that contained a 3 or 4 story bank just a couple long months ago. It is hard to imagine what Pisco looked like before the earthquake. I have the feeling that we will be seeing the landscape of Pisco change drastically over the next two months.

Sandy brought us to her house and we ate lunch with her family. Her house is near the center of Pisco and they are fortunate to still have a home. Her family was very kind to us and they prepared us one of the biggest lunches I have ever attempted to eat…complete with meat, rice, fish, eggs, corn, etc. It is difficult to make ends meet in Pisco right now and her family went above and beyond to be hospitable.

Later that day, we helped Caritas distribute and set up tents throughout Pisco. This gave us a chance to see more of the town and meet some of the families who have lost their homes. In total, we set up 16 tents and the families were appreciative. Lending a helping hand is the least we could do.

Today we met with Dr David and he showed us the 2 hospitals in the center of Pisco. We were given tours by the hospital Directors of both facilities. The first, San Juan de Dios, is actually a fairly new structure. They are obviously overwhelmed and they have also set up medical tents outside of their facility to accommodate the patients. 60% of their patients are there for maternity and they don’t even possess an ultrasound machine, which was unfortunately destroyed in the earthquake. The second hospital, Hospital de Salud, was destroyed. The hospital operations were moved to a tent encampment and all of their services were offered from the tents. They too seemed very overwhelmed with patients lined up outside the tents waiting to be seen.

Dr David brought us to meet with the president of his organization, ACER. There are still details to be sorted out, but I have a great feeling about this organization. They are based in San Clemente which is a few kilometers outside of Pisco. They are interested in collaborating with us to erect the clinic. They are a social/economic organization so some of their members include engineers, architects, doctors…many people who will be willing to help out. They have even been given a choice of several plots of land by the Mayor of San Clemente to open up a new office which would also serve as the site for our clinic. They will help getting necessary permits as well as getting the community involved. We are meeting with them again tomorrow to survey the different properties. This could be a nice arrangement moving forward. Did I mention that Dr David is out of work because his clinic was destroyed in the earthquake…and that he is looking for fulltime work? Since most of the buildings are unsafe, it looks as though we will be looking to build a structure for our clinic. This will take time. In the meantime, we will do our best to secure some tents from some of our new-found NGO friends in Pisco so we can begin offering medical care asap while the clinic edifice is constructed.

Later in the afternoon, we toured through an albergue…which is a tent settlement. There are many thousands of families without homes and many of them are in these albergues. In this particular albergue, Medicos Cubanos have set up shop. Medicos Cubanos is a Cuban NGO of doctors who have been here since 2 days following the earthquake. They services are offered from tents…but…in those tents they have surgical capabilities, a complete outfit of radiology equipment, and many specialties. They have basically created a full service hospital out of tents. Rene has been instrumental in all of these meetings thus far and we would not be moving so quickly if it weren’t for him. I am trying my best to learn Spanish. I study my Spanish textbook when I have time and I review my flashcards while on the 1 hour bus ride from Ica to Pisco and back. I can understand most conversations but it is difficult to communicate effectively and express myself so I leave that to Rene.

Tomorrow, we are heading out at 6am to help our friends at Tzu Chi with a distribution in Pisco. Tzu Chi is a Taiwanese Buddhist organization which operates in 65 countries. They will be distributing 150 tons of rice, 4000 blankets, oil, etc. I can only expect the distribution will quite an experience. So far, so good!!