Project Goal:
To add to the quality of life of the poverty stricken flood affected population of union council Bahawalpur, Dadu, in a two prong approach; provide basic and emergency healthcare while delivering simple health and hygiene awareness related messages. 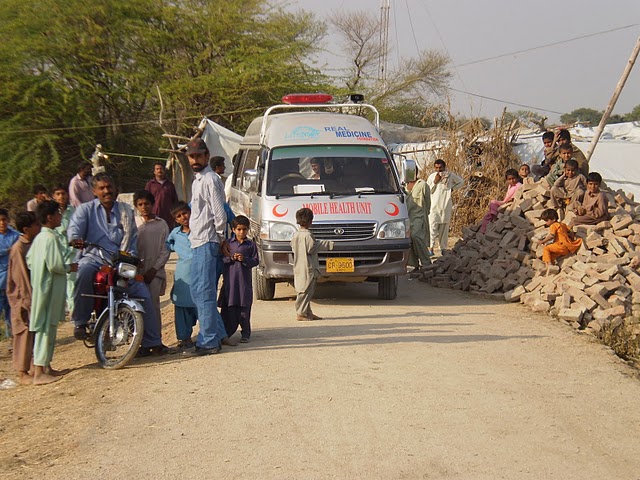 Summary of RMF-sponsored activities carried out during the reporting period:

The Mobile Health Unit (MHU) began operation in Union Council Bahawalpur in April. We had expected to begin operation immediately after the situational analysis but a critical funding gap forced us to put the project on hold until it was satisfactorily addresses. On getting back onto the field, a new issue arose of lack of skilled medical staff willing to rough it out on the field in this hot, stifling summer. This unavailability could be attributed to the fact that most of the other health partner organization working in Dadu had chosen to set up static clinics in urban towns and cities making it easy for medical personnel to find quality employment within the comfort of their hometowns. It took us two weeks to find qualified and willing medical workers.

So currently, the medical staff on ground is a lean 3-member team consisting of a doctor who caters to all primary health care issues. Accompanying him is a Lady Health Visitor (LHV) to address MNCH issues related to pregnant and lactating women. She also caters to general health issues presented by women who observe ‘purdah’ and would rather seek care from a female practitioner. The third member of the team is the medical dispenser who is responsible for disbursement and record maintenance of medicines. The medical team is accompanied by a field officer and an armed security guard given the increased lawlessness of the region of interior Sindh post-floods. The MHU works 6-days a week.

A typical day for the MHU begins with procurement of the day’s stock of medicine and accompanying supplies of injections, IV infusions etc obtained from the Medical store in our Dadu office. Intravenous medicines requiring cold chain storage e.g. Tetanus Toxoids are stored in an ice box. The field officer coordinates all the logistics of the MHU travel and on reaching each village, liaises with the community leaders paving the way for the day’s medical camp. The doctor sets up camp in a central area of the village, recommended by the elders which is often the mosque or under a large tree. The LHV sees her patients usually in the privacy of the MHU interior or in some cases, in the house of a leading community leader. Both healthcare providers make a sharp effort to identify malnutrition and cases of mild to moderate cases of malnutrition in children and PLWs (pregnant lactating women) are given nutritional supplements. The dispenser sets up his store near both healthcare providers’ and disburses medicine according to the prescription slips issued by the doctor and LHV.

Each member of the medical team maintains their own record of patients. At the end of the day, this data is shared with the field officer who submits it to the IT data base officer for conversion into soft copy for the development of DEWs and our monthly morbidity reports. The field supervisor undertakes the duty of visiting individual households, in the company of village elders/representative and distributes clothing and water purification sachets. These are often accompanied by conveying basic messages on hygiene and health awareness.

The MHU clinic operations wrap up in the late afternoon to drive back to the office before dark. Interior Sindh is a desert and after sundown becomes an empty, desolate place and naturally the security element worsen. The MHU is parked in the office and since some of our staff members are not residents of Dadu, we provide boarding and lodging at the office premises. We are attempting to cover one village a day although this is sometimes not possible since the size of the villages vary. The average size of a village is 50 households with each household having an average of 10-12 family members. Every day presents a new challenge starting from the road leading into a village which more often than not has ceased to exist but our field officer is from Dadu and knows the landscape like the back of his hand.

In mid-May, RMF head office staff paid a visit to the project site. Dr Geet received us in Karachi and after a drive of 5 hours, we reached Dadu city. A brief respite in the office and off we went, following the MHU to “Mazhar Khan Jiskani”, the target village for the day. This was a small village consisting of about 24 households covering an area of 500 yards diameter. The temperatures ranged between 40-45oC . The doctor set up shop under the shade of a tree while the LHV saw her patients in the MHU. We accompanied the field supervisor in his household visiting task and saw his very professional interaction with the villagers. Most gratifying were the smiles on their faces as they received the donations from AFYA Foundation all the way back in New York. Most of the villagers were reasonably accepting of our messages related to basic health and hygiene and showed immediate willingness to utilize the water purification sachet for their drinking water supplies. In this particular village, which was small by normal standards, the drinking water supply was two communal large earthen pots placed strategically in the middle of the village compound. Hence our water purification sachets, which were distributed normally on household basis, were given in bulk to the village elder women for daily use.

By end of May 2011, our MHU has covered 31 villages and between the doctor and the LHV, a total of 2134 patients have been treated successfully for target illnesses. Of these 826 (38.7%) were children under five years of age. The gender distribution of the children above 5years and adults was 786 (36.8%) men and 294 (13.7%) women. Of these few women, the LHV saw 107 women for gynecological and obstetric related problems. The average daily OPD was 65 patients. The most common presentation was diarrheas (450) which were successfully treated and accompanied by distributed to ORS sachets amounting to 1000 liters of ORS solution. The other most common presentation was acute respiratory illnesses -ARIs (250). 400 families from 31 villages were given water purification packets accompanied by hygiene and health awareness messages. Between the doctor and the LHV, 1000 children and 600 PLW were identified with mild to moderate malnutrition and were given nutritional supplements.

The MHU has funding to continue operations for the next two months during which time the monsoon season is expected to start and with it the awful memories of the floods of the previous season.