Real Medicine Foundation and LifeBridge have joined hands to provide primary healthcare to flood affected communities in interior Sindh. The two most acutely affected districts in interior Sindh were Dadu and Thatta. District Dadu is divided into 4 Tehsils, out of which Tehsil Johi was the hardest hit by the floods because it is located between two major water sources, the MNV Drain and the FP Bund, both of which experienced an unprecedented deluge of flood water. According to the local health cluster authorities, although a total of 15 health partners are working to provide healthcare to 38 union councils of the 4 Tehsils of District Dadu, they are still unable to access more than half of these areas. 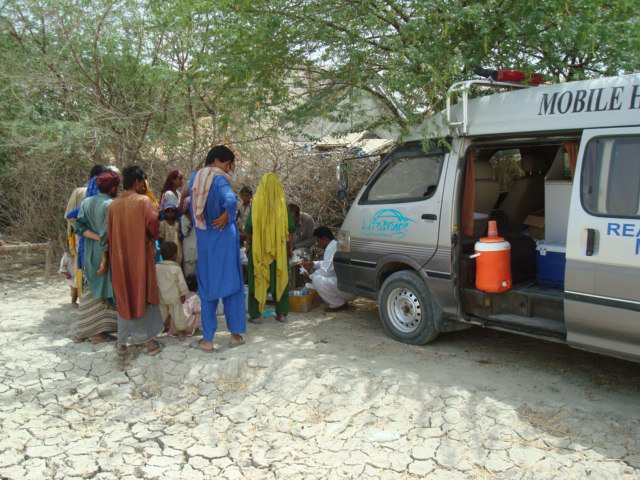 We decided to work in Tehsil Johi of which 3 union councils (UC Bahawalpur, UC Drighbala, UC Pat Gul Mohammed) were identified by the WHO as having none or very little health intervention. RMF and LifeBridge embarked on a rapid health needs assessment in these three union councils. A local grass root NGO called Kachoo Foundation, based in Dadu City was taken on board for this exercise based on their knowledge of the local area, culture and colloquial.

The survey was split into two phases. The first phase was to understand gaps in providing timely responses to vulnerable groups and identification opportunities to improve health services as well as the status of the target group and to analyze the mother & child health status of the targeted group in the flood context. The WHO approved pre-formed questionnaire was used which also included a household-based demographic evaluation of a small sample of villages.

Phase II was a cross-sectional survey to assess the most current needs of incidences of water-borne diseases, general health ailments and the healthcare sought by the communities for these, given that several health partners were in operation on ground providing free primary health care. Our aim was not to duplicate services as well as to have as high an impact as possible with our limited funding.

We sampled a total of 40 households. The average number of family members per household was 10-11 persons. Most households (36/40) exhibited a joint family set-up, the cultural norm in rural Pakistan. Within the category of communicable diseases, 34 of 40 households (75%) had had a family member suffering from watery diarrhea within the previous week but only a third of them received oral rehydration solution treatment. Over 70% (29/40) of the households also reported a family member suffering from severe respiratory illnesses out of which half claimed it severe enough to confine them to bed. Only 20% of those with severe cough/flu were able to travel the 10 – 15km distance to Dadu City for treatment. Nearly half of the respondents (19/40) had had symptoms of malaria since the onset of the floods with over 70% failing to receive any malaria treatment whatsoever. None of the households had received any insecticide treated mosquito nets. There were large pools of stagnant water, remnants of the flood water, in several locations in the center and around the damaged huts that were visually infested with mosquitoes.

For the reproductive care category, out of the 40 households surveyed, only 4 did not have a woman of reproductive age (14-49) years in the family. Of the remaining, 34 out of 36 (94.4%) households with women were found not to have had prenatal care supplementation. There was no maternal newborn and child health care program in place for the emergency setting. None of the pregnant women have seen a Lady Health Worker for antenatal care. Out of these 36 families, 7 women gave birth post flood but all deliveries took place under the care of unskilled traditional birth attendants. Infant mortality statistics were unavailable. None of the children in our sample 40 households have received vaccinations of any kind after the flooding.

Most of the families knew of the availability of healthcare at the district hospital in Dadu City but 64% cited reasons such as lack of easy transport, no money for transport and lost wages as reasons for not accessing this healthcare facility. Of the three union councils, UC Bahawalpur exhibited the worst findings and this was the deciding factor to implement our services in this neglected area.

Real Medicine Foundation-LifeBridge have set up office in Dadu City. We have hired the key persons required for the initial steps in the logistics of setting up a Mobile Health Clinic. With the Mobile Health Clinic ready for operation, the immediate hurdle faced was to first map the area and identify villages that have been the worst hit by the floods.

This also meant that these were the villages where the roads leading to them had disappeared, suddenly making them inaccessible. The terrain of interior Sindh has become unrecognizable with most of the road washed away with the flood water and large tracts of land still under 2-3 ft of water.

An exercise of mapping that would have normally taken a few days transformed into several weeks. Sometimes as few as 2-3 villages only were accessed and identified in a full day. The vehicles rented for this purpose stalled as they were pushed beyond their capacities. A distance that normally took 20 minutes pre-flood now took 1-1 ½ hours despite using 4X4 vehicles designed for rough terrain. Mechanical back up for the vehicles was only available in Dadu City or Johi City and if such a need arose, a whole day’s work was lost under these circumstances.

The results of the mapping exercise was a total of 16 villages identified as the worst hit with absolutely no health care intervention of any sort.

A situational analysis of these villages showed their wreckage beyond recognition. Most of the residents who had fled to seek shelter in tent cities in the immediate aftermath of the floods were now straggling back in small groups. With their homes destroyed completely, many have set up home in the tents they carried back with them. Some have attempted to rebuild their houses using broken bricks and mud instead of cement. They protect these delicate temporary structures from the heavy winds by lining the compounds using dry bush. Stagnant pools of water are still present in the main village areas festering massive mosquito breeding grounds. The local water body leading to the community water supply has been contaminated and is not fit for human consumption. With no clean water and sanitation available, neighboring farm land is used as open latrines which often leads to security risks to females.

All these makeshift communities are facing a dire future and children are particularly vulnerable to acute diarrhea, skin infections, and stomach infections, all related to water-borne diseases. The risk of Malaria and Dengue fever are major causes of concern due to increased temperature, contaminated water sources, lack of available medical care and lack of health and hygiene awareness leading to a threat of epidemics.

For a full Gallery of photos of the MHU out in the field please visit these Picassa pages: