The mission of the Ochieng' Memorial Lwala Community Health Center is to meet the holistic health needs of all members of the Lwala community, including its poorest. Whenever possible it addresses health problems at their roots through community health interventions. It aims to provide excellent community-based health care, not to become a tertiary care facility. The health center is part of a larger effort to achieve holistic health and development in Lwala, including educational and economic development. The primary beneficiaries are children, pregnant women, HIV infected persons and the elderly. Prior to the establishment of the clinic, there was no immediate access to primary health care or HIV/AIDS testing and care. For this reason, the Lwala health intervention has focused on primary care for children, access to medicines (particularly vaccines and antimalarials), HIV testing and care, public health outreach and safe maternity. The impact has been substantial since opening. Lwala Village is part of the North Kamagambo Location in Rongo District, Nyanza Province, Kenya. North Kamagambo counts approximately 30,000 people.

In addition to basic primary care services, the Lwala facility provides maternal and child health services such as antenatal and postnatal care, vaccinations, growth monitoring and family planning; treatment of tuberculosis; comprehensive care for HIV, preventative services including PMTCT and male circumcision, counseling and testing as well as ARVs and nutritional support for persons living with HIV.

From August through October 2009, primary care was provided to 3,141 patients; more than 45 children were fully immunized; 198 women received antenatal care visits; 5 HIV positive mothers were delivered and received PMTCT care. A new HIV testing algorithm was implemented in accordance with MoH guidelines. Two Umama Salama workshops were held during which 17 women and 6 men were trained in Safe Motherhood lessons. A Rapid Core Assessment Tool for Child Health (CATCH) survey was conducted. Menstrual hygiene intervention was implemented in a local primary school. A successful measles vaccination campaign was conducted in conjunction with the Ministry of Health in response to a measles outbreak in the country. In addition, in conjunction with FACES, active recruiting for mothers to bring their male babies for infant male circumcision was done. Access to condoms was improved by the placement of condom dispensers in the latrines. Two Children's Club sessions for HIV positive children were held. Also, a proposal requesting a kit of essential drugs from the Ministry of Health was submitted. Approval was obtained to receive both a monthly dispensary and a monthly health center kit which includes essential drugs such as antimalarials and antibiotics. 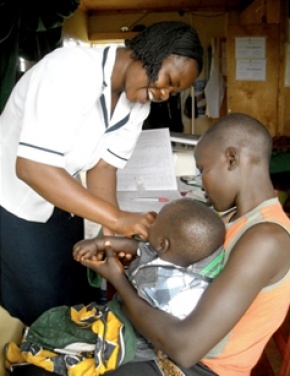 The MCH clinic is open every day beginning between 8 and 8:30am. Services provided include antenatal care (ANC), family planning (FP), immunizations and growth monitoring for children under 5, prevention of mother to child transmission of HIV (PMTCT), and post partum care. Services provided here are integrated, such that if a woman brings her child for immunizations, she will also receive education and counseling on FP and can initiate a method that day. This is unlike many other clinics in Kenya, which operate by only offering services on specific days, thereby turning away clients when they attend on the "wrong" days. MCH nurse Rose begins each session with health education on relevant topics. Women who bring their children for immunizations are counseled on types of immunizations, into what part of the body each vaccine is injected, how often to bring children, and why it is beneficial to attend the clinic. Rose also counsels women about family planning methods. Her welcoming demeanor encourages women to ask questions without fear of reproach.

Family planning methods available at the clinic include DepoProvera (injectable), oral contraceptive pills, condoms, and emergency contraception. Women are also counseled about implants and intra-uterine devices (IUDs), which are available in Rongo, Kisii or Homa Bay.

In line with global standards, women are encouraged to come for at least four ANC visits during pregnancy. As this is a time when many women will be tested for HIV, the ANC visits provide an important entry point to HIV care and treatment services for women and their partners. 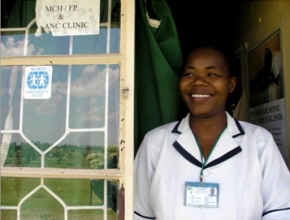 Following are cases during one routine morning of antenatal care: 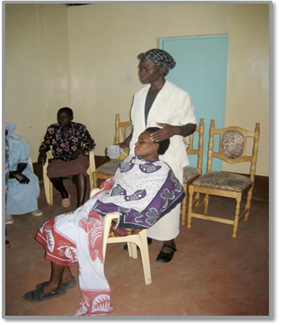 In an effort to teach community members about recognizing and responding to obstetric complications, two workshops were led by Susan Akoth, our Umama Salama instructor, during the last reporting period. Seventeen women and 6 men attended all sessions of the workshop including Basic Information, Women Problems, and Baby Problems. The participants learned the "3 R's" of problems in pregnancy: "recognize, respond, and refer", and conducted role-plays to practice proper responses to emergencies. The men and women received certificates during a ceremony held to celebrate their participation. Clinical officer John Badia and a nurse aid contributed to the workshops by answering medical questions about pregnancy and childbirth and by encouraging the participants to actively support the care of pregnant women in the community.

On September 25, 7 students (4 boys and 3 girls) from class 8 at Lwala Primary School came to the clinic to be tested and counseled for HIV. They sat together to receive group counseling from lab technologist Mike Ondiek about testing, sex, HIV, and other sexually transmitted infections. The students demonstrated a remarkable amount of knowledge in answering Mike's questions, a testament to the quality of HIV education provided periodically in the schools by the Lwala clinic staff. The students encouraged and supported one another as their blood samples were taken. Each student received individual post test counseling, a bag of condoms, and a date to return for routine testing. Happily, all students tested negative for the virus. 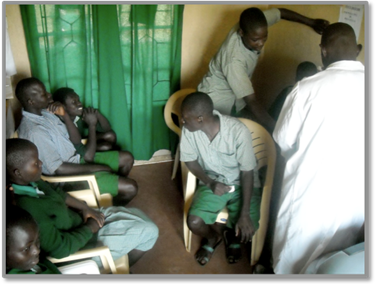 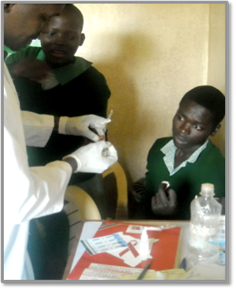 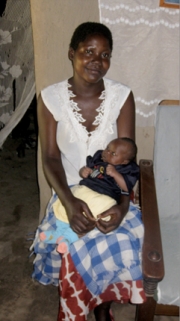 Lucy Atieno came to the Lwala Community Health clinic in labor on the morning of October 3. After laboring for several hours, Nurse Vine determined that the labor was obstructed and referred the patient to Tabaka Mission Hospital for further care. Lwala's ambulance carried Lucy, Nurse Vine, and a community health worker to the hospital, where Lucy safely delivered a little girl. Shortly after, when the Tabaka nurses manually removed Lucy's retained placenta, everyone celebrated the ambulance that had enabled Lucy and her child to access the emergency care they needed. The community health worker visited Lucy in her home the following week where she found a healthy mother and child. Lucy brought her baby to the clinic for immunizations at the encouragement of the community health worker.

We invite you to visit these sites relating to this project: