Since our last update in November, 2007, much activity has surrounded the community of Lwala, Kenya, as well as its new primary health clinic. Beginning in late December, post-election violence rocked Kenya, with a particular focus of the chaos centered in the Western provinces. Long standing inter-tribal conflicts fuelled riots sparked by the questionable polling and vote counting practices. By the time the two feuding political parties had signed a power sharing agreement in late February, more than 1000 deaths and 300,000 displaced citizens had been reported. Throughout these months of turmoil, my thoughts and worries were consistently drawn to the people of Kenya, and particularly to the safety of the community of Lwala. My fears for this beautiful village were thankfully assuaged by the sporadic updates from members of the Lwala Community Alliance (LCA) who were in Kenya when the violence broke out. According to LCA executive director Joel Wickre

"The violence did affect the clinic, though perhaps not in the way you'd imagine. Lwala was peaceful, and for precisely that reason many patients who would otherwise have gone elsewhere walked great distances to get healthcare in Lwala."

Though there was a delay opening after the holiday, the clinic staff took advantage of a relatively peaceful window in mid January to return to the village, and the health center has been running ever since. Because the city hospitals were immobilized by the unrest, the clinic's patient load increased significantly. Well over 2,000 patients per month are now being seen!

The most exciting recent news coming out of the LCA/RMF partnership is the approval by the RMF board of directors for the financing of a vehicle to act as ambulance for the clinic. After many months of searching for a suitable vehicle by people on the ground, RMF received news in mid-March that a well maintained, truck-based 4×4 had been found that, with a few modifications, would serve as a perfectly capable emergency vehicle. Compared to other bids of quotation on other used and new vehicles, this particular proposal clearly stood out due to the quality of the vehicle and the price (including modifications.) The addition of such an emergence vehicle will undoubtedly improve the safety and efficiency with which the Lwala clinic can care for its patients. Past tragic instances speak to the necessity of this ambulance:

[Erastus Ochieng' Memorial Lwala Community Health Center founder], Milton, recalls a pivotal experience as a teenager, when he was called upon in the middle of the night to help push a woman suffering from complicated labor to the hospital in a wheelbarrow. She died on the way, and Milton turned around and wheeled her back home for her funeral.

Above is a video depicting just such a situation in which the availability of an ambulance would have allowed for much safer care of an individual requiring immediate treatment.Another way in which RMF has been actively trying to assist the Lwala clinic is through the procurement of bicycles for use by community health workers (CHWs). The cornerstone of the LCA's proposed HIV/AIDS program is a network of trained CHWs. These CHWs will be recruited from local HIV/AIDS support groups and women's groups. Already, three CHWs have been hired to follow up with patients on ART through partnership with Tabaka Mission Hospital, a quality tertiary care hospital 20km from Lwala. They will be trained at the Lwala clinic in home-based care, ART adherence, and social support for people with HIV/AIDS, using a curriculum designed by Partners in Health. Each CHW will be equipped with a bicycle and basic supplies such as gloves, and will each be paid a small monthly stipend, intended to augment their normal daily activities rather than replace them. Each CHW will be assigned to no more than 4 patients near their home. Every patient on ART from the health center living within a 10km radius will receive daily in-home follow-up and directly observed therapy from a CHW. The CHWs will provide important follow-up to identify drug side effects and reactions, to ensure regular clinic attendance, and to help address threats to patient success as they arise. They will also act as a referral network for new patients.

On a less positive note, the former clinical officer (Peter Ochieng'), whose salary RMF had been funding, recently chose to leave the Lwala clinic in exchange for a government job. Such transient employees are an unfortunate fact of life for this clinic due to its remote location and thus unglamorous lifestyle for its staff. Those in charge of staffing the clinic are well aware of this burden on clinic sustainability and try, at all costs, to employ individuals who have, for whatever reason, a greater commitment to the clinic's continued success. As such, any search for new staff members is tailored to unearth those individuals who express sincere interest in the long-term care and growth of the clinic and its surrounding community. 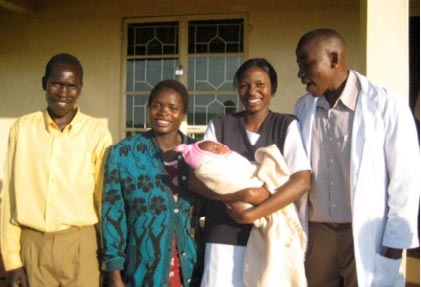 Finally, an update on the ongoing work to implement a robust maternal and child health (MCH) program at the clinic. Late one night in September of 2007, two women showed up in labor, desperate for the assistance of the clinic and its trained staff. Both women delivered in the early hours of the morning, using the clinics consultation rooms as maternity rooms. While both children were delivered safely (thanks to the skill of the staff members), this incident demonstrated to the community the necessity of delivery services at the clinic. Subsequent deliveries (performed in the laundry room!) in the months that followed cemented this need, and now work is quickly being done to obtain the basic equipment necessary to make deliveries at the clinic safer. As well, thought is being focused more broadly about how to meet the needs of mothers and children in Lwala, and how to reduce mother to child transmission of HIV. LCA plans, which have been developed in consultation with several friends who are obstetrician/gynecologists and nurses and/or midwives, include: considerations for pre- and postnatal care; safe delivery facilities; and a traditional birth attendant (TBA) outreach, training, and referral network. At present, the Lwala clinic has no unused space to develop the proposed maternity program. The plan is to construct a building with a delivery room, a small maternity ward, and a toilet and shower room. Because MCH services are currently being provided in the kitchen of the existing health center, plans are to consolidate pre- and post-natal services with the existing MCH services in this new building, which would require the construction of a dedicated MCH room. These rooms would be combined with the space necessary for the proposed HIV/AIDS program in a single new building. Implementation of these programs will also require the purchase of several delivery kits and a delivery table to equip the delivery room, as well as beds, IV poles and other furniture to equip the maternity ward. For postnatal care of children born to HIV positive mothers, in-home purification systems must be purchased to provide safe water for mixing formula. These systems will be based on the WHO's simple and proven "Safe Water" chlorine-treatment program, and require only a receptacle with a screw tight lid and a tap, and locally available, cheap "water guard" solution. Adequate formula to feed these babies for their first 6 months of life will also need to be purchased and various training supplies will be necessary for TBA training.