Enable the District Hospital to fulfill its role of providing back-up referral health care for the Turkana region. 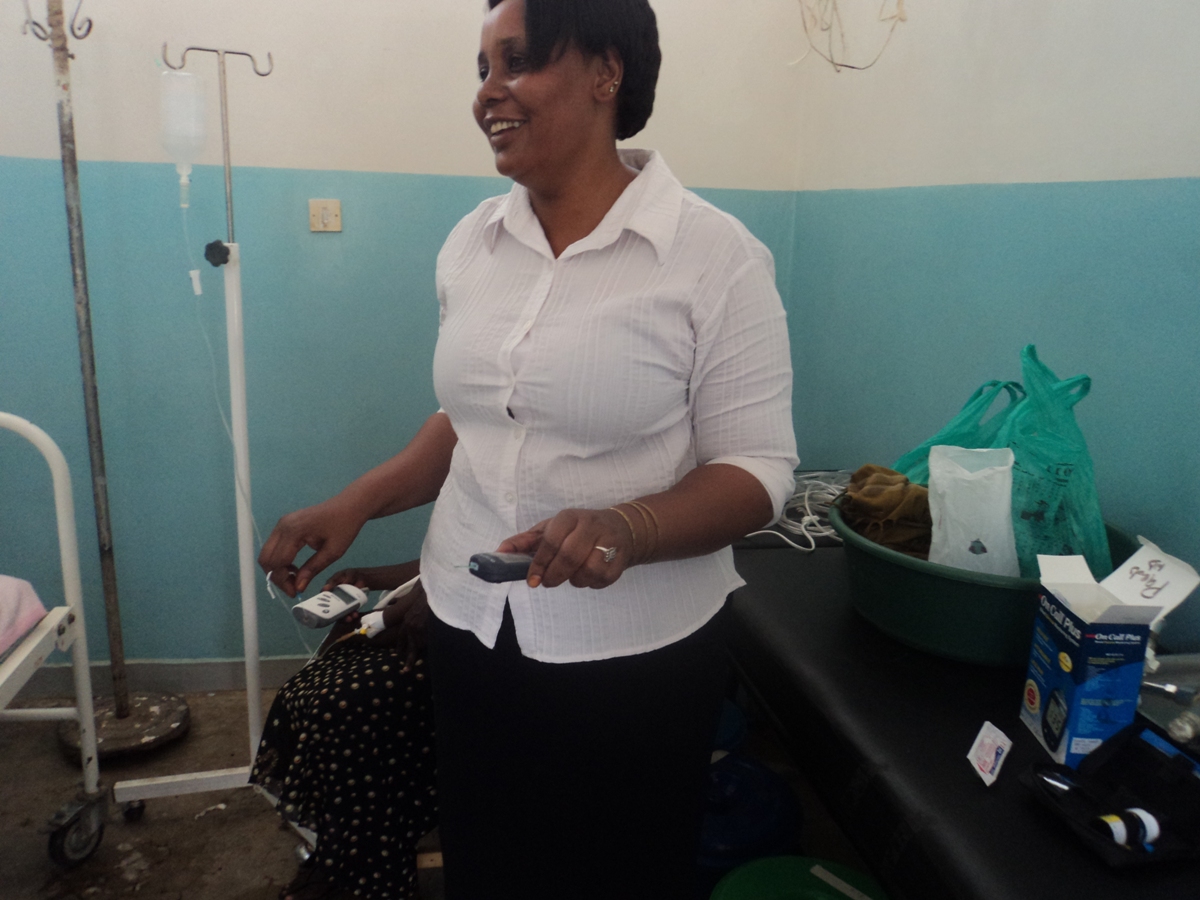 Photo: Picture of a nurse using the new pulse oximeter and glucometer on a patient

Having successfully repaired and renovated most of the infrastructure in the previous quarter at the pediatric ward, RMF did the final repairs in the Fourth Quarter. The drainage system at the pediatric ward was blocked and the sewer had burst before RMF began work. It had been a major factor for transmission of diseases to patients admitted with severe acute malnutrition that had to stay in the ward for an average of 10-14 days for treatment. RMF took the initiative and repaired the burst sewer completely and constructed a new washing area bay for the ward. Now the guardians of the patients have a common area where they can wash their clothes, and this also lessens the amount of stagnant water around the facilities that brought mosquitoes and malaria.  RMF also purchased new dustbins for the ward as the ones previously used were old, broken and did not have lids to cover them. In addition, the old and rusty sinks at the nurses’ station were replaced this quarter with new steel sinks, ensuring that the cleanliness of the walls matches that of the sinks. All these improvements have made for a much cleaner environment at the wards.

RMF also purchased more equipment for the hospital this quarter: equipment such as bed blocks, ward bed clipboards, oxygen flow meters, bed cradles and drip stands. Each bed now has a patient file to keep track of the diagnosis being given to the patient, hence ensuring a smooth follow up with the doctor while doing the ward rounds. E.g., previously, patients admitted with fractures didn’t have the option to recover in the wards due to the unavailability of bed blocks and bed cradles to assist in their recovery process.

A full supply of drugs and non-pharmaceuticals was purchased during the 4th quarter. Emergency drugs that are never supplied by KEMSA such as Augmentin, IV Venofar and Dextran (for anemic patients), Zinacef injections, Artenam injections, Ampiclox, Centrizine, Ibuflam, Ascoril, Pethidine, Ranferol-12, Fluconazole amongst others were procured during this quarter, ensuring that the pediatric ward doesn’t run out of emergency medical supplies.

Regularity in medical supplies is a novelty for the hospital as the ‘normal’ state of affairs before RMF/MMI’s general budget support was a paltry stock of essential and emergency medicines and pharmaceuticals.  One of the reasons for the steep increase in patient load may be that the patients no longer must purchase their own drugs for treatment.

We also bought a full supply of lab reagents this quarter. The hospital can now do almost all of the laboratory tests needed, and some that had never been done before due to lack of reagents.  RMF/MMI provided reagents such as ASOT, Hepatitis B & C, grouping sera, full haemogram as illustrated in Appendix A, which had never been supplied or purchased at the hospital before.  Reagents such as Field stain powders, Grouping sera, VRDL Test kits, Xylene, Sensitivity disks, Brucella arbutus, Hepatitis B & C strips, formaldehyde were also procured. The supply of reagents went a long way to show RMF/MMI’s commitment to supporting the Hospital.

After the successful renovation of the pediatric ward by RMF/MMI, the environment is much more conducive for the hospital to create a rehabilitation and sensory stimulation center with an occupational therapist.  The patients using the rehabilitation and stimulation centre most frequently include: patients with cerebral palsy, Down syndrome, microcephaly, hydrocephalus, delayed developmental milestones/regressed developmental milestones, infantile hemiparesis, epilepsy and mental retardation.

The rehabilitation and sensory centre offers:

Modes of exercise include:

The above are to help the patients attain developmental milestones, overcome their deficits, disability and/or to be able to cope with the challenges posed by their disability.

835 patients were treated during the Fourth Quarter:

Nopet Lomarito, a 7 year old boy, was brought into the hospital as a referral, very sick and in a coma. The diagnosis was that he was suffering from cerebral malaria and meningitis.  He was immediately treated with intravenous quinine sulphate and ceftriaxone for 5 days but did not show any improvement. His condition worsened and he developed severe difficulty in breathing and was running a fever. The treatment was then changed to Zinacef 750mg (purchased by RMF/MMI) for 5 days. The patient condition then improved drastically. This is a patient we could have lost were it not for the availability of Zinacef, a drug which is not available through the normal medical supplies at the hospital, and the relatives of the patient would not afford.

Peter Lomurukai the Medical Laboratory Technologist in charge at LDH while receiving the reagents from RMF said:

“I am delighted to receive the laboratory reagents from RMF. We were not able to do most of the specialized tests such as rheumatoid factor (RH) for rheumatic infections, antistreptolysin O titre (for bacterial infections), hepatitis B & C antigens (for ruling out hepatitis infection), general bacteriological cultures and typing sera amongst others. You have really helped us very much. Thank you for the support and may God bless you abundantly.”