It has five administrative Divisions with a total area coverage of approximately 14,766km2 of which 3,320km2 is covered by Lake Turkana. The districts have a population of 243,809 with 80% being nomadic pastoralist.

Table 1.1: Area of the District by Administrative Units (km2), population and density 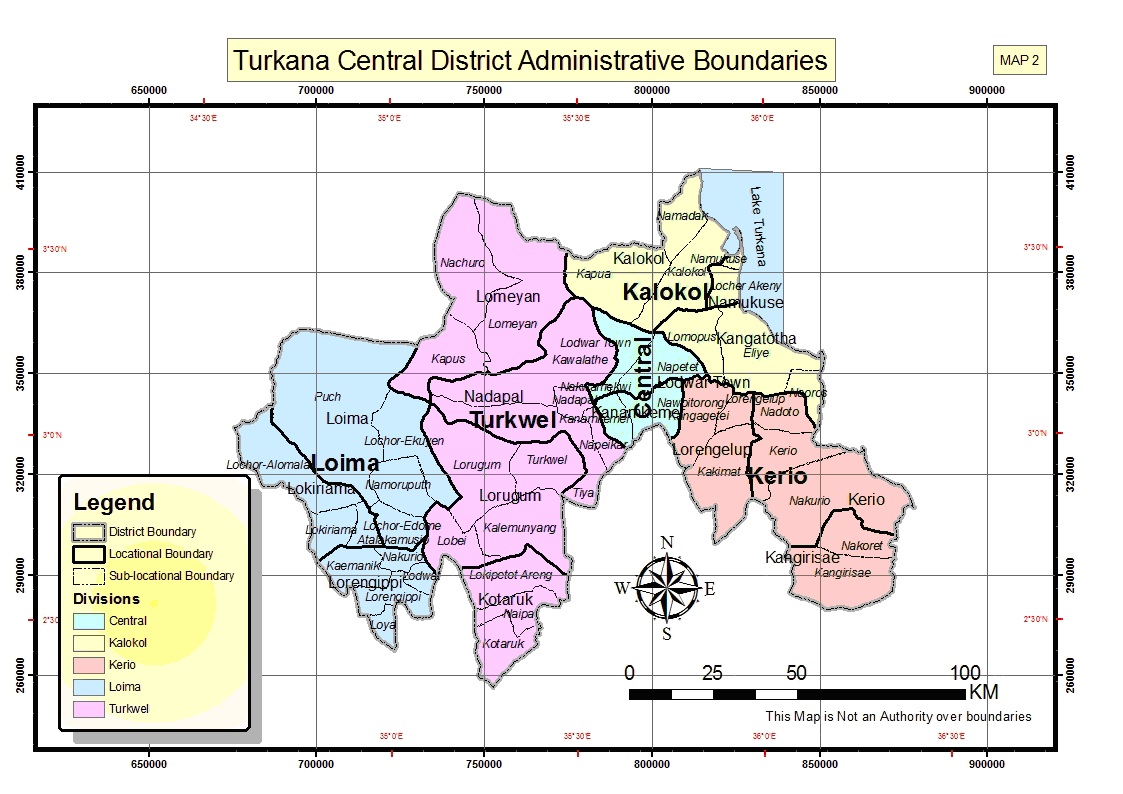 The physiographic features in the district include low lying open plains, mountain ranges, Lake Turkana and the river drainage patterns. The main mountain ranges of the district are Loima and Lorengippi. The altitude of the mountains ranges between 1500 and 1800 metres above sea level in the east reaching the peak at Loima, which forms undulating hills for a stretch of some 65 Km². The mountain ranges, because of their high elevation are normally green, covered with dense bushes and high woody cover. The ranges support important economic activities like honey production, grazing during the dry season, water catchments sources, gum Arabica harvesting, small rain fed shambas, and wood production.

The open lying plains consist of the central plains and Kerio plains. The plains form part of the arid area in the district and receive the lowest amount of rainfall of around 180 mm per annum. These plains are dominated by dwarf shrub and grassland, which provide forage for livestock during and shortly after rainy season. However, this forage dries rapidly at the onset of the dry season.

Rivers Kerio and Turkwel are the major rivers in the district. Both of these rivers are seasonal but are very important having the potential of producing large amounts of food for the district if properly utilized.

The rivers drain into Lake Turkana. The lake situated on the eastern part of the district, has three important islands and is endowed with a variety of birds, crocodiles and hippos. Fishing is the major activity in the lake.

Turkana Central District is arid and semi-arid and is characterized by warm and hot climate. The temperatures range between 20ºc and 38ºc with a mean of 30ºc. The rainfall pattern and distribution is erratic and unreliable both with time and space. There are two rainfall seasons. The long rains usually occur between April and July and the short rains between October and November and ranges between 52 mm and 480 mm annually with a mean of 200 mm. The driest periods are January, February and September. The rainfall is distributed on an east-west gradient with more rainfall in the western parts and other areas of higher elevation. The rain falls in brief violet storms resulting in flash floods. The surface runoff and potential evaporation rates are extremely high.

Due to the low rainfall and high temperatures there is a lot of evapo-transpiration resulting into deposition of salt in the soil and capping on the surface. As a result, only about 30 per cent of the district’s soil can be rated as moderately suitable for agricultural production. These moderately fertile soils are found at the central plains of Lorengippi, the upper Loima, the lowlands of the Turkwel, Nakaton and Kawalathe drainage along the lake at the lower Kalokol and Turkwel – Kerio rivers and a portion of the Loriu Plateaus.

For the last two and the half decades, the district has frequently suffered from failures in the annual rains but 2006 and 2007 witnessed a higher than expected rainfall. Conversely, flooding is also possible when there is too much rain like it was witnessed in October 2006 where many parts of the district experienced losses of livestock and pasture due to the flush floods.

The district has several topographical features of note, including mountain ranges to the west, open plains in the centre, and rivers and Lake Turkana to the east. Lake Turkana is the largest and most saline of the Rift Valley lakes, though its water is arguably potable. There is no outlet, and with reduced inflows and high evaporation, the water is subject to three to four meter seasonal fluctuations in level.

Soils are not well developed due to aridity and constant erosion by water and wind. Often they are capped by stone mantles. Colluvial soils tend to be reddish over the basement system and generally grey buff or white over the volcanoes. Aeolian soils are dune sands either active or fossil; Alluvial soils range from coarse sands to flash flood silts, while black or brown clays occur locally in areas of impended drainage.

Forest covers (area) in the district is a trust land area where communities utilize all natural resources without any restriction. There is no forest territory gazetted or surveyed. Loima hills forest cover is about approximately 20,000 Hectares however the forest has neither been surveyed nor gazetted. 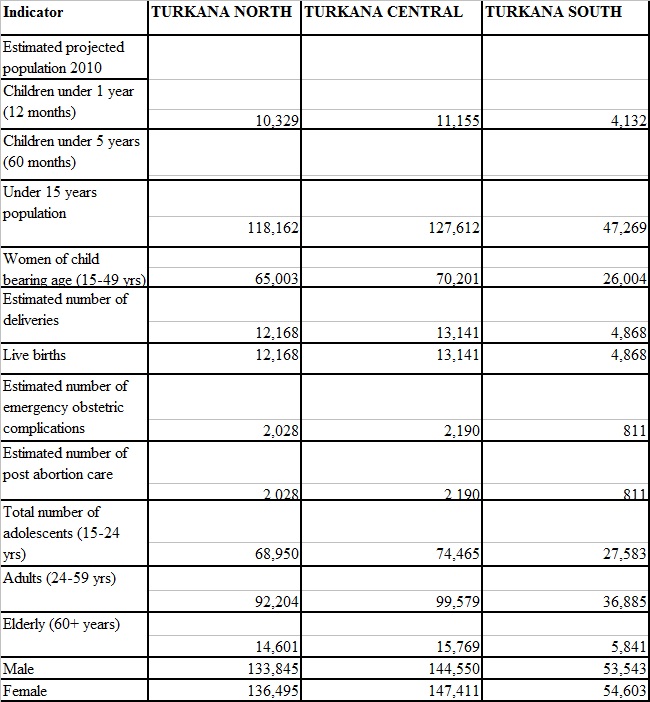 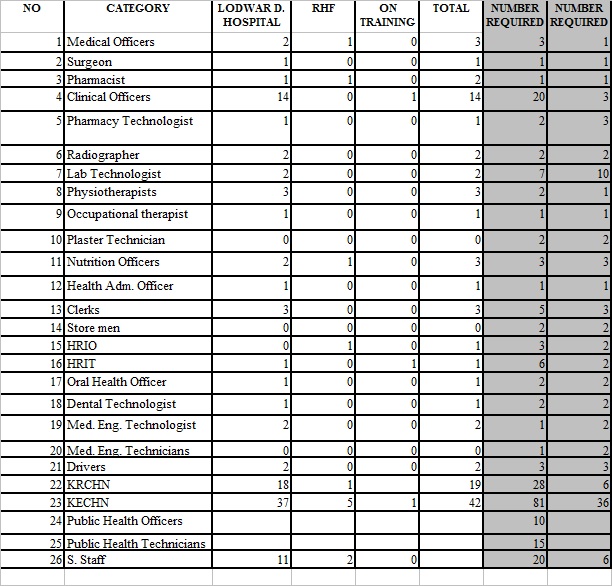 A) UNDER FIVE YEARS 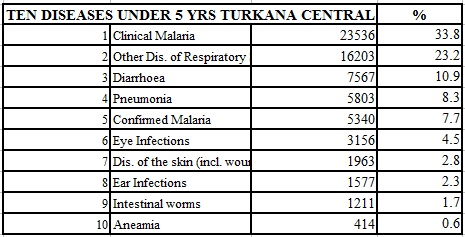 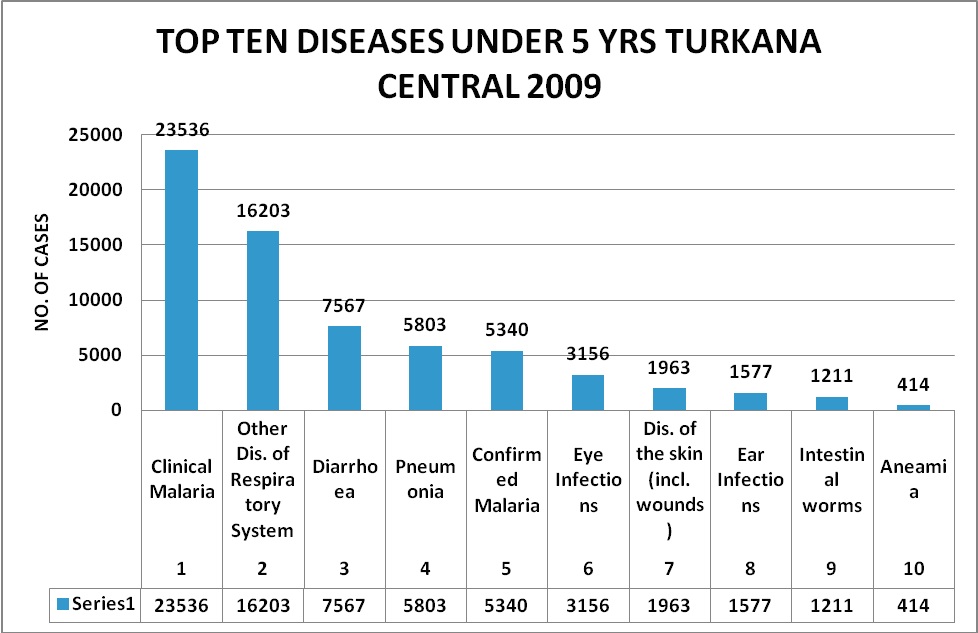 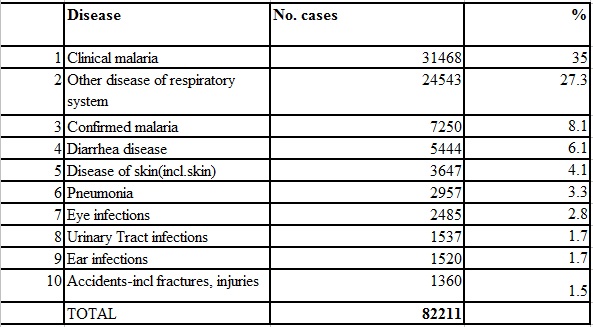 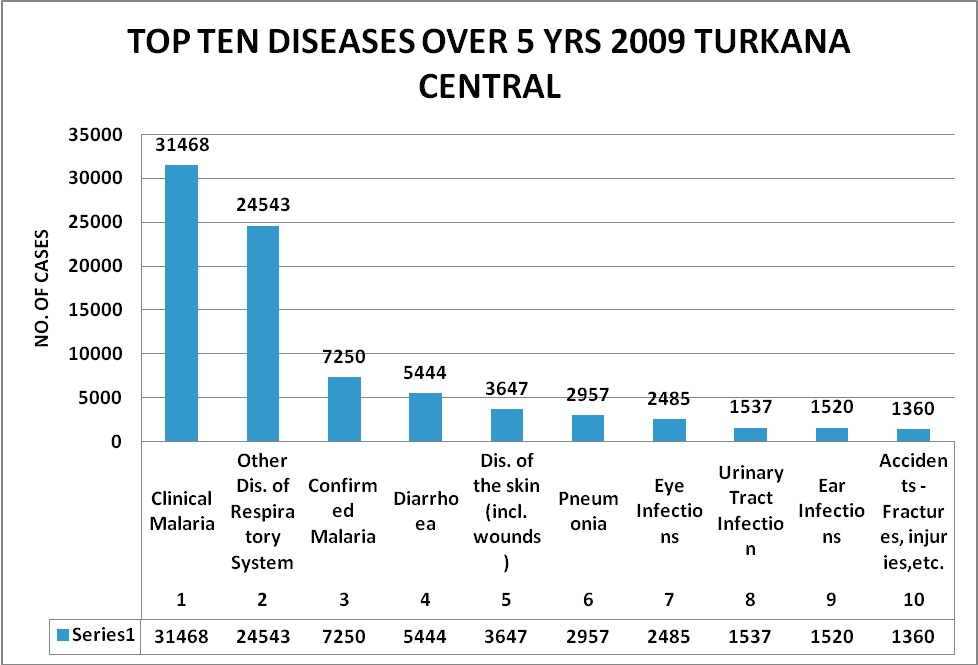 Table below show the immunization status for the year 2009