This month RMF concentrated on ensuring that more necessary ward equipment was purchased. Items like a food trolley, patient stretchers, dressing trolley, ambu-bags, and a suction machine among other items were bought. Initially, the food at the pediatric ward was served using a wheel barrow and is now using a food trolley, patients are able to be served in a more hygienic way. Due to the availability of the dressing trolley, now the doctors have an easier way of doing the ward rounds. 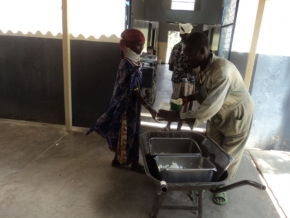 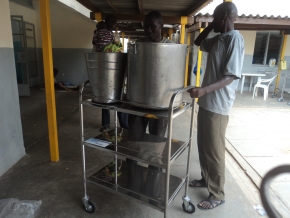 Picture of the food trolley being used

RMF also took the initiative to improve the general overview of the paediatrics ward. This included a few repairs to the glass on the windows and doors to the pediatric ward to ensure that the children are safe from cutting themselves on the doors while admitted in the hospital. 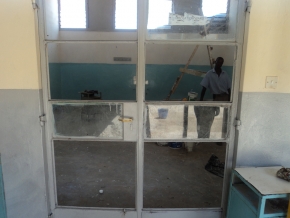 Above pictures of the broken glass on doors/window 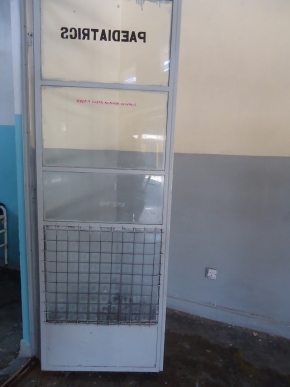 Above picture of the after repair on door/window

We also focused on the drainage system to ensure that the hospital has hygienic toilets and one that the patients can actually use. This was more than just a nuisance for the mothers of the pediatric patients – it was also a security concern. They were forced to wait until nightfall and find an adequate place in the desert around the hospital to do the needful. Besides the issues of safety, this is also an issue of dignity. RMF will ensure that the hospital toilets are always hygienic and clean and the drains unblocked.

The lighting system of the whole pediatric ward was replaced since the wards remained dark at night due to lack of functioning of the lighting system. Patients were forced to use light torches in the ward at night until now. 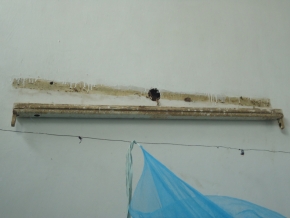 Picture of before lighting was changed 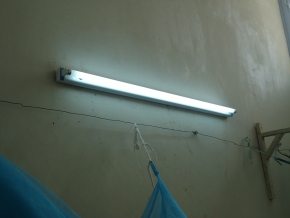 Picture after the lighting has been fitted

The paediatrics ward also suffered when it came to supply of disposables. We managed to purchase emergency disposables e.g disposable gloves, gauze rolls, and bands.

The laboratory was short of various lab reagents and blood typing sera – without these products, basic lab services such as blood group determination were not possible. RMF stepped in to purchase all the reagents/grouping sera and emergency items that are needed at the lab including the disposables e.g disposable gloves. to ensure that the patients tests are done The last supply of the same items received by the Hospital from the Government was 8 months ago. The Hospital staff was quite elated having received the reagents. 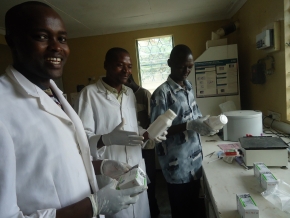 Above: Laboratory staff happy to receive the laboratory reagents

We look forward to more and more great coming month of achievement.