Enable the district hospital to fulfill its role of providing back-up referral health care for the Turkana region.

Target Population:
Over 900,000 residents of the Turkana region; Even though Lodwar District Hospital officially only covers Turkana Central, in practice the district hospitals in Turkana North and South are not functional, hence the patients from those areas also come to Lodwar for referral care.

Infrastructure:
RMF/MMI has completely re-painted the pediatric ward (photos below), both the front and the back portions, giving it a brand new, clean look. New fans have been installed in the pediatric ward, along with new sink fixtures, glass windows/doors and lighting in the whole pediatrics ward. The new fans were of paramount importance due to malaria season – the patients and their mothers/caretakers were sleeping outside due to the intense heat, putting themselves and their children at increased malaria risk. With the arrival of the fans, the patients are now back in the wards at night, under the protection of the new bed nets. 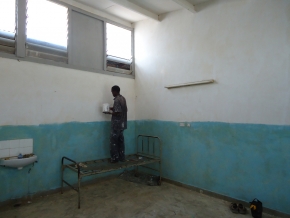 RMF is working with the Spain-based NGO Nuevos Caminos to renovate and partially reconstruct the operating theater. Nuevos Caminos has pledged the necessary funds to undertake this endeavor, with the implementation being managed by RMF. The Nuevos Caminos surgeon and 2 architects are currently at Lodwar District Hospital to assess, together with RMF, the equipment and supply needs for the operating theater, as well as calculate a preliminary cost estimate. In addition, various permission slips need to be procured from the Ministry of Health-Rift Valley Province, the process of which has been started.

Maintenance:
Attempts are being made to ensure high-quality maintenance of the newly purchased equipment. Equipment has traditionally broken down with high frequency in the past; hence to avoid this, a meeting with the hospital personnel is planned in early June to discuss good practices in equipment usage. The meeting will be headed by the Manager, Health Systems Strengthening Fund, Turkana as well as the 2 on-staff hospital biomedical engineers. The engineers have also committed to more regular maintenance of all the equipment. RMF will, in turn, ensure that spare parts are purchased when necessary to facilitate scheduled servicing.

Medical supplies:
Many emergency pharmaceuticals such as Adrenaline and Lignocaine and oft-used drugs such as Salbutamol have been purchased. The list of items to be purchased was modified several times after an unexpected supply of some of the drugs came in from KEMSA (Kenya Medical Supplies Agency), after 9 months of waiting. In addition, lab reagents have been purchased to enable the laboratory to conduct the full range of standard blood counts and microbiology tests.

Training:
RMF is working with the Spain-based Fundacion Pablo Horstmann to procure a specialist pediatrician from Spain for one year starting the end of 2011 at Lodwar District Hospital. Talks and planning are on-going. If a pediatrician is found, Fundacion Pablo Horstmann would cover the salary and housing; RMF would coordinate and manage not only the on-the-job training but also special thematic training sessions for Lodwar District Hospital staff. 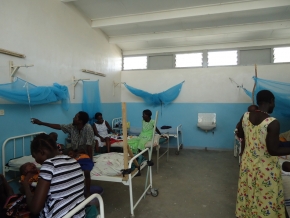 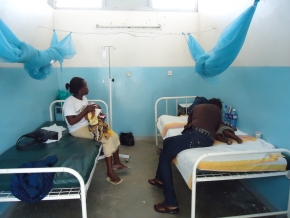 • Patients have access to drugs at no cost that they were once asked to purchase themselves/ were not available & not supplied by KEMSA at the Hospital.
• There has been a notable increase in number of patients who come for treatment from 184 the previous quarter to over 400 patients this quarter.
• General cleanliness & improved health practices at the pediatric ward has been noted.
• There have been minimal referrals to other hospitals for treatment since some equipment that were not available are now available and patients can now be treated on-site. One example is the oxygen concentrator.
• Emergency drugs are readily available at the Hospital for free, some of which had not been supplied at the hospital for more than four months forcing the patients to buy from the chemists which many cannot afford.
• There is a noted increase of patients coming for treatment since the project begun.
• Other organizations such as Nuevos Caminos have shown interest by coming in and contributing to our project so we can create an even bigger impact. Interest has been shown in wanting to renovate the OR, Male & Female Ward at the Hospital.
• More patient success stories to come in next report.