KOMPIP (the Consortium for Monitoring and Empowering Public Institutions) is providing agency funding to support the infrastructure. KOMPIP is a Central Java-based non-governmental organization committed to facilitating the democratic process and alleviating poverty on a grassroots level. It has a proven commitment to developing community economic sustainability, working with marginalized peoples, and promoting the democratic process. Since 2003, KOMPIP has developed and expanded a unique version of micro-lending which the organization calls Tabungan Rukun Tetangga (TRT, or neighborhood community savings). Through a three-step process involving poverty information system mapping, work-plan development and the allocation of a "stimulus grant", KOMPIP proposes a strategy of sustainable support by providing the community with skills and knowledge on community saving.

The benefit of community saving is in keeping capital steady for long periods of time. More powerful than cash support, it keeps financial capital/earnings within the community which accumulates over time. Community saving is flexible in supporting various needs. It lets people freely but properly determine their social and economic needs.

Early support from the Real Medicine Foundation at Mlese Village proved that various social and economic problems have been mitigated by the provision of capital through these community saving programs. From the findings it is interesting to note that people in general did not want to accept more than between $10 and $80, since they fear they would not be able to pay back a bigger sum as that would be culturally shameful. RMF used a self-regulatory process and has had a 99% payback rate.

Birit is one of a hundred villages destroyed after the earthquake in Central Java. More than 80% of the houses in this location were severly damaged. Social and economic infrastructures were destroyed and many people lost jobs. What remains has been spent on recovery of their houses. People are just now beginning to participate socially and have economic gains. Most of the people live as industrial and farm laborers in the tempe and tofu industry, or as food vendors and clothing tailors. They are still in need of support to mitigate their many burdens. The following is some data on the Birit Village.

III. Purpose of the program:

The general purpose of this proposal is to build capacity for social economic recovery through community saving.

A. Village Meetings for Program Orientation, Monitoring and Evaluation 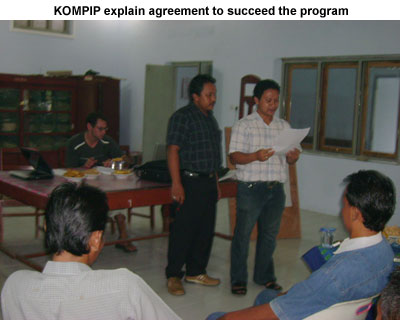 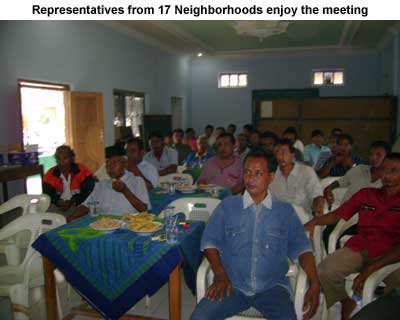 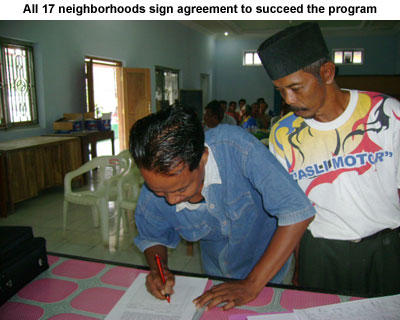 A survey of family income will be performed to determine poverty levels. This information is expected to be used as a pilot for the poverty information system. In the future, this data may be used by decision-makers in the communities in order to put more recognition towards prioritizing people in high poverty. This survey is done by field facilitators doing mentoring of members of the community saving project. The survey is targeting 100% of the households in this village. RMF requests continuous surveys and updates, and follows up on the grants that have already been given out.

Learning from experience during the early support from RMF, it was determined that community members needed guidance so that they can move forward even when field mentors do not stay at the location. Guidance for the community members and grantees is provided on how to build their micro business, how to pay back the loans, and improve their capacity, knowledge and spirit of community saving in order to achieve the highest possible success rate. A calendar is distributed to 100% of the households at the village to keep themselves on schedule. The production of these calendars also works as a marketing campaign for RMF and KOMPIP.