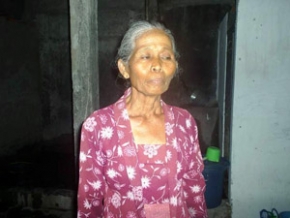 Mrs. Darto may be 75 years old, but that does not lessen her spirit! Mrs. Darto lives alone so she likes to work to occupy her time. She has used the same old bicycle for more than ten years to sell her kerupuk (chips made of flour and flavored with fish or shrimp, served alongside or on top of many Indonesian dishes).She buys kerupuk from a big seller in for 40.000,00 rupiah. Every day she brings two sacks of kerupuk on her bike to sell, but her sales fluctuate. “When you sell, you do not always profit. Sometimes you lose something too. The average seller can never be certain if they will make enough money to buy their daily food, by grace of Allah.”. A grandmother of five, Mrs. Darto believes that selling kerupuk keeps her revitalized. Because every buyer wants a different amount of kerupuk, she sells them in many forms– by the dozen or pre-wrapped in plastic pouches. Her kerupuk prices start from 500 rupiah for a small plastic bag. She can make up to 20.000 rupiah a day, but this is not guaranteed and she will often make much less.

Mrs. Darto, whose late husband died two years ago, is not only involved with community savings group RT 01 for BIRIT village, she is also one of the most active members. Mrs. Darto’s three sons are happy that she became involved with community savings because it is easy to get a profitable loan with the group. Loans as big as 200.000 rupiah can be used to buy kerupuk. With the aforementioned money, she can buy three sacks of kerupuk However, she must spend her money carefully because if she buys too much kerupuk at once the chips might go stale before she sells out. Mrs. Darto can sell three sacks of fresh kerupuk in about one week. This might make 80.000 to 100.000 rupiah in the week—quite a large amount. This amount helps Mrs. Darto meet her economic needs, which, since she lives alone, do not total much. Although her youngest son still often visits, Mrs. Darto does not let her life depend on her children because they all already have families of their own. She says that she wants to make her own living now, as her children will someday have the difficulty of supporting her. Her kerupuk business fulfills her needs for now, but Mrs. Darto points out that her fate is the will of a greater power.“My answer is that I will work until I am no longer strong enough to buy my own basic necessities. Then maybe I will stop,” she smiles.