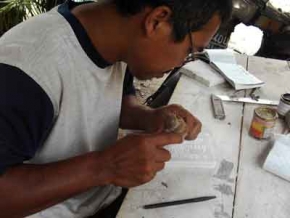 Mr. Sukemi’s family business is selling kijing (gravestones), engravings, and raw stone material. The three segments of his business are interdependent. Mr. Sukemi’s wife, Mrs. Novi, helps him with his business, especially with bookkeeping as she has experience in accounting. Mrs. Novi is also an officer in the community savings group RT 02. The gravestone business that Mrs. Novi and Mr. Sukemi run was actually founded by Mr. Sukemi’s father. Mr. Sukemi manages the family business here alone after his father opened another branch in a different location. Since taking over management he has held out through many great challenges to protect the business. The kijing business is not attractive to most people, and since need for the stones fluctuates Mr. Sukemi’s profits are never stable from month to month.

It takes careful observation of the market, cleverness, and a good business sense to remain successful in this business, so Mr. Sukemi is always challenged by his work. Mr. Sukemi, the father of two children, enjoys his work more and more the longer he runs his kijing business. However, selling kijing alone does not generate enough capital to meet his family’s daily needs. He may only sell one or two kjing in a month, and sometimes he may not sell any at all. But he is always able to sell many kijing during ruah musim (the month before fasting in the Javanese calendar), as many people need kijing before the holy month. Although Mr. Sukemi may not sell many kijing on a daily basis, he always keeps his workers busy making new pieces. He is always able to stock his display windows with an arrangement of kijing. He must admit that Mrs. Novi often comes up with the most creative ideas for the kijing, and Mr. Sukemi makes his engravings as interesting as possible based upon her sketches. 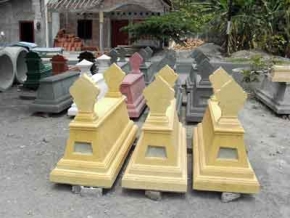 Most kijing sell for between 300.000 and 700.000 rupiah, but depending on the base material and amount of work put into the piece the price can reach even 1.000.000 rupiah. A basic kijing made from a usual stone costs only 300.000 rupiah. Because of competition in the market, Mr. Sukemi uses sound business strategies to remain successful and competitive. He offers his kijing at lower prices than other suppliers and also strives to give the best service. In addition to his kijing business, Mr. Sukemi does engravings and sells raw stone materials. His material business complements his kijing shop and also provides a relatively consistent income. Most businesses in Birit village experience some instability, but because Mr. Sukemi runs several complementary operations he protects himself from failure. The raw material business is always successful, and he is even able to sell broken kijing as raw stone. He sells a lot of concrete, especially after the 2006’s earthquake. Many people came to him to buy building materials for destroyed homes and especially to repair wells for drinking water.

According to Mrs. Novi, the family’s business has held strong through the earthquake disaster because they keep good relations with many customers, and community savings helped her by offering profitable loans. Mrs. Novi once held the top chairperson position in her community savings group. However, because the group’s treasurer resigned, Mrs. Novi took over the bookkeeping instead. The chairperson position went to the neighborhood head (community leader).

Mr. Sukemi and Mrs. Novi are both registered members of the community savings group RT 02 in Birit village. Mr. Sukemi joined after his wife and was quickly able to borrow money because of her influence. The family’s first loan, for 200.000 rupiah, was borrowed in the name of Mrs. Novi, as she was already an established member of the group. Mr. Sukemi was able to take out a second loan for 200.000 rupiah later in his name. Both Mrs. Novi and Mr. Sukemi added the capital from their loans to the family business. With 400.000 rupiah in total, Mr. Sukemi can buy three large stones as raw material for three kijing. After work on the kijing, they can sell for 300.000 rupiah each, so all three pieces will generate total income of 900.000 rupiah. From a loan of 400.000 rupiah Mr. Sukemi can make a profit of 500.000 rupiah. Although this seems like a large amount of profit, it is certainly not a daily occurance to make so much money. The idea of this profit motivates Mr. Sukemi to further develop and advance his business, as such income is not a guarantee.

The community savings program, according to Mrs. Novi, is positive, very helpful, and much needed by its members. Her hope is that the supervision of the program continues as now to keep the members organized. If the members are not closely supervised, she thinks that they may begin to forget the importance of repayment and look at the available money as gifts rather than loans.