The Birth of Naiara’s Rahul Trust 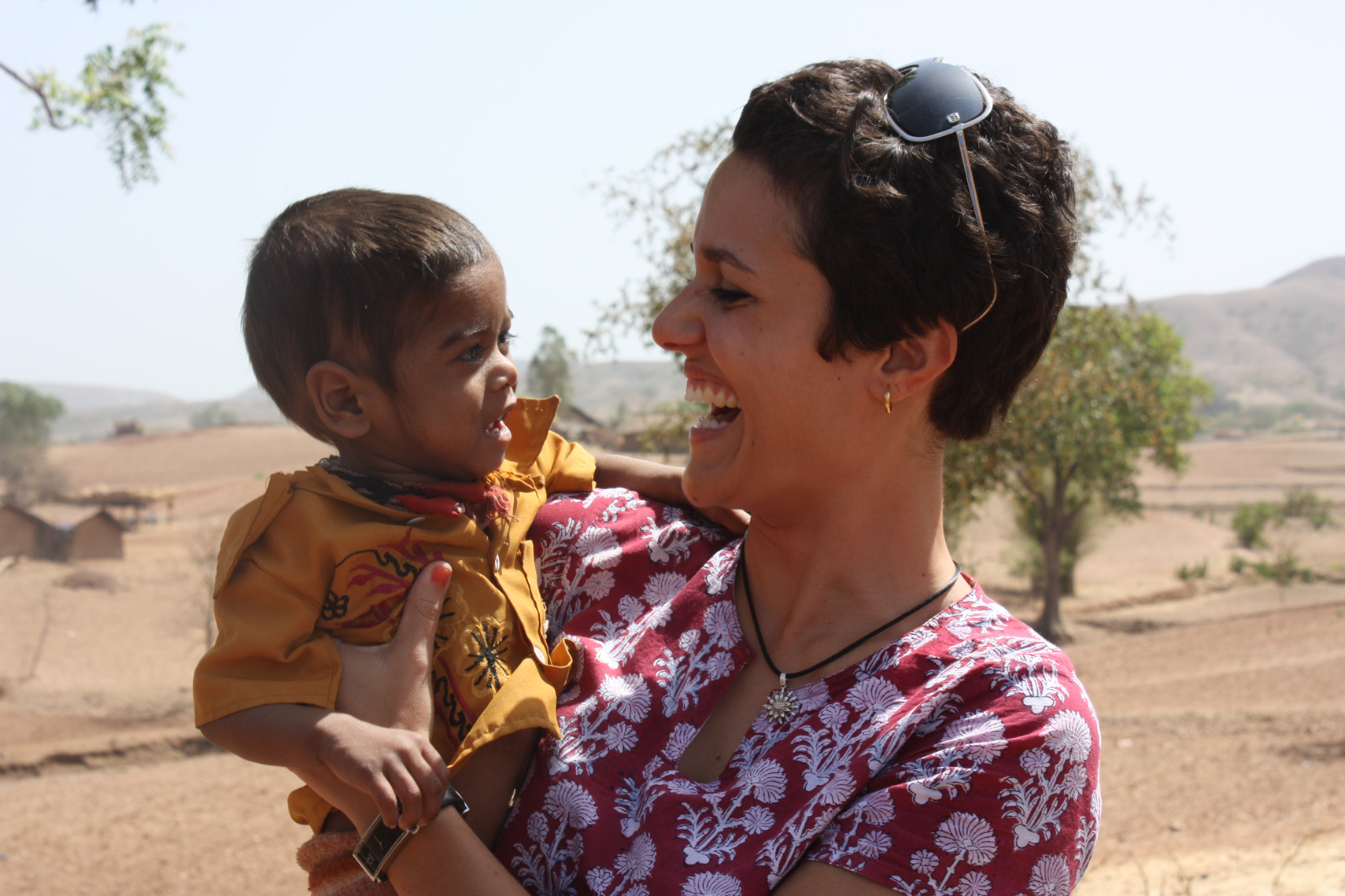 Photo: Naiara and Rahul after 2 months of treatment in May of 2012

I cannot stop thinking of how happy I feel knowing I made the right decision. For as long as I can remember, I had always wanted to have an experience like that. Knowing that most of the NGOs would not accept my help for less than six months, I decided at that point to postpone this experience until my PhD was over.

During my studies, I was lucky when in 2006 the Basque Government gave me a grant to go to Minneapolis (USA) to attend a training course on stem cells. It was during this time when I had first contact with lovely India without actually visiting it. I preferred to stay with a local family rather than staying in a hotel and that is how I met the most interesting person ever: Nancy Ramer, an elderly Scottish very religious woman. She had lived 37 years in India, giving birth to four children. She is the one that brought me there with her magic stories told almost 6 years ago.

I tried it very hard to find NGOs that would accept me volunteering in India but for one reason or another, I had had no success. However, the day of my thesis defense, the 7th of October 2010, a member of the tribunal, Luis Rodríguez-Borlado, let me know that a friend of him was working in India with an organization, and that if I wanted, he could get me in touch with her. I accepted and Luis put me in touch with his friend in India. 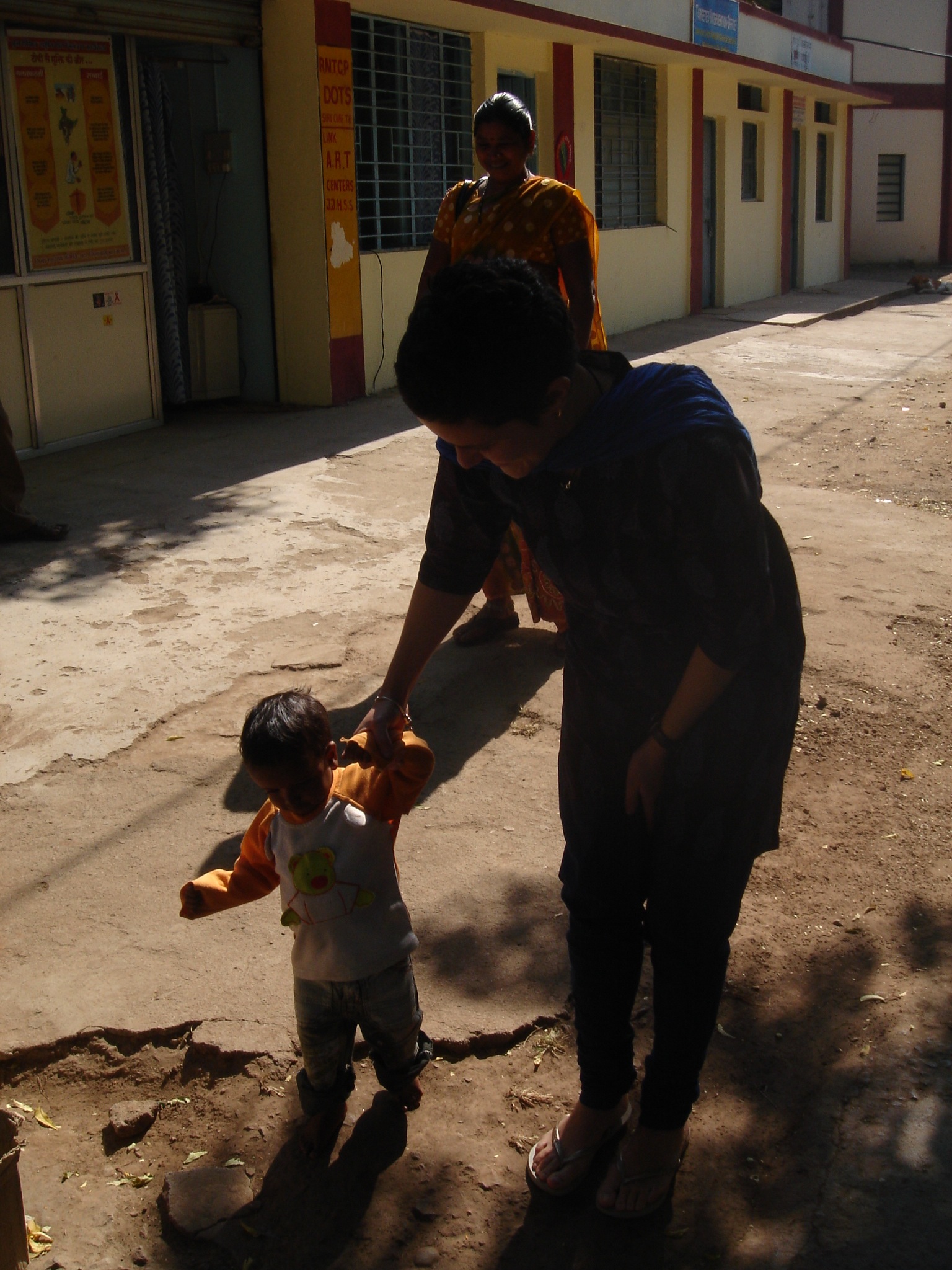 Photo: Naiara at an Indian hospital shortly after her arrival as an RMF Volunteer

After putting herself in my shoes, Valeria de Azcoitia let me know that she could give my Curriculum Vitae to one of the staff members of the Real Medicine Foundation (RMF). Surprisingly quickly and unexpectedly Dheepa Rajan, the RMF Coordinator, Global Projects, got in touch with me and showed Real Medicine’s interest in having me in Jhabua, Madhya Pradesh.

I remember doubting of my abilities to live in that fascinating but hard country the next day after arriving. I even thought of the possibility of having to leave India before expected. However, I do not remember feeling that anymore in 4 and a half months I stayed in India. I fell in love with that country. If I had to choose something, I would just choose the PEOPLE. I was in touch with native tribal people, the poorest of the poorest economically, but the richest in many other aspects. I remember feeling things I would never expect to feel before reaching that land. They are the most pleasant people I have ever met, children, adults, elderly men and women, who having nothing give everything.

I went to India with a main goal: to contribute to the survival of a child who would have died without our help.I went there to give my best, in my own way or in theirs, at all costs.

During my months in Jhabua, halfway between New Delhi and Mumbai, I met and had the chance to support many children –and their families. I still remember their names: Rahul, Amansingh, Suriya, Gila, Anandini, Basanti, Vaishali, Shakuntala, Sharika, Pintu, Papita, Ajjay, Pannu, Sonu, Preeti, Munna, Ashish… Each of them with different conditions, different ages and different ways of being, my heart is theirs. We tried to help them all, many of the times with a high success. I will briefly mention my experience with Rahul, the little angel actually that gives name to this new initiative.

When I first met Rahul, I was speechless, but could not stop looking at him. It took me a minute to look at his parents, and perceive their anguish, powerlessness in their faces. We asked to the young parents if they were willing to leave the hospital to go to another one that could handle his condition, adding that Real Medicine Foundation would do everything to help. They did not hesitate. 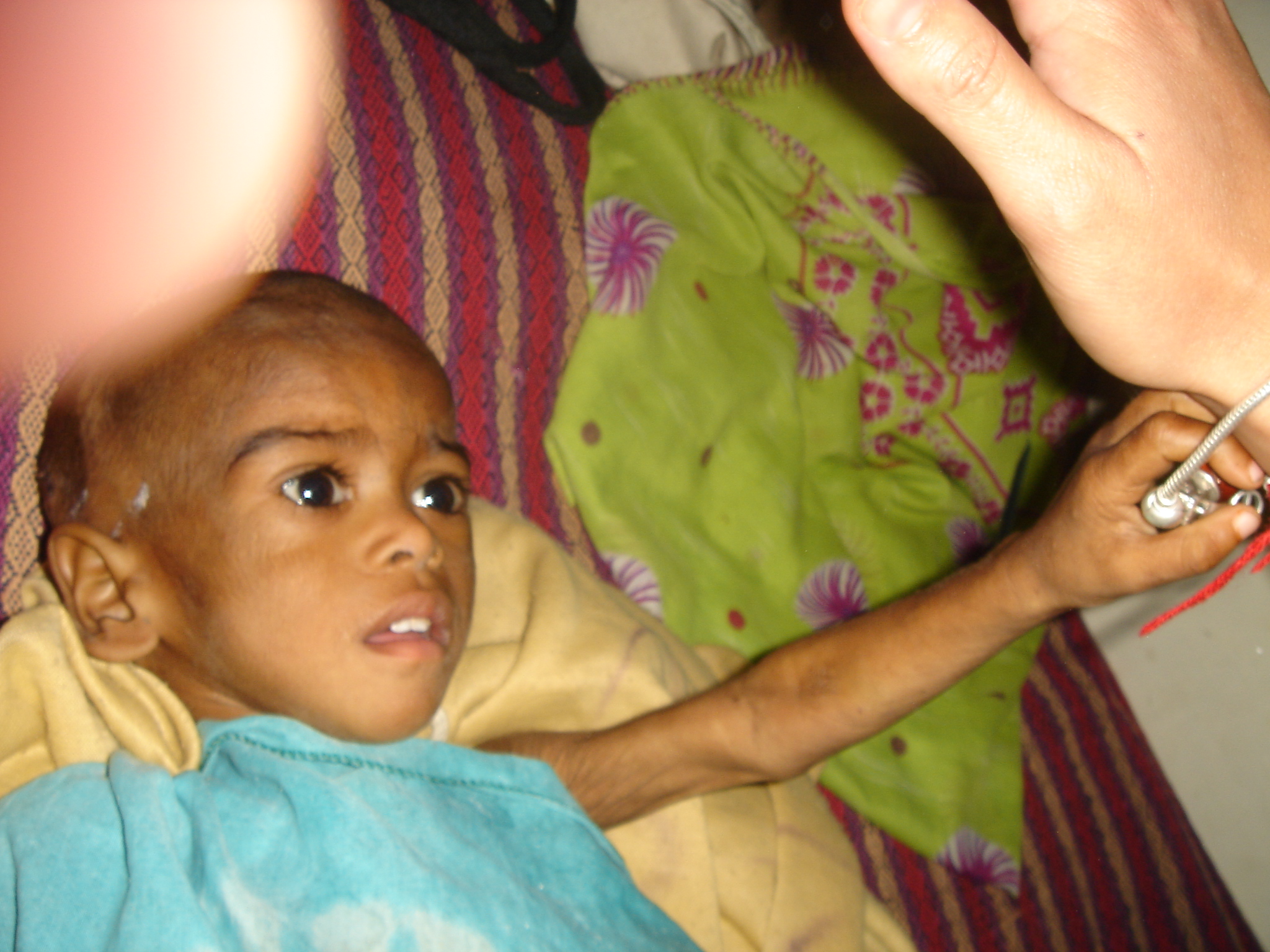 Photo:  Rahul in February of 2012 when Naiara first met him and his family

We wanted to first get an official diagnosis from the stellar pediatrician Dr. Sachin, who works at the government Jhabua District Hospital. He suggested us, as he did with a previous patient, to go to the Civil Hospital in Ahmedabad. So we did. In the company of Jaimie and our incomparable staff Sumitra, Rahul was admitted in the hospital upon arrival. The tubercular meningitis diagnosis was confirmed, and they also let us know that Rahul suffered from hydrocephalus.

A few hours after admission, Rahul was operated to place a shunt going from his brain to his abdomen in order to relieve the pressure produced from excess of fluids in his cranial cavity. He was also put on anti-tuberculosis treatment that normally lasts 6 months, but his condition was so critical that he needed to take medication for 9 months. Thus, after several days in hospital with hard medical treatment and under the watchful eye of a magnificent American volunteer named Roma Patel, Rahul was discharged on February 28. The poor child could not sleep yet…

In the office that the wonderful staff of Indicorps (www.indicorps.org/) accommodated us every time we needed to stay overnight in Ahmedabad, Roma, the beautiful mother of Rahul called Nahati and I first practiced the painful physiotherapy exercises recommended by professionals to work Rahul´s semi-rigid extremities, during which Rahul did not stop whining. However, shortly after, I could not hold back my tears of joy when I realized that Rahul could see my bracelet! Only 15 days of hospitalization and treatment had begun to restore the sight of this angel. This was, without doubt, one of the best gifts during my stay in wonderful India. It was then when I saw Nahati smile for the first time since we met. My happiness was indescribable.

While Rahul´s recovery was favorable, we realized that his body, still skin and bones, could not keep anything in: Rahul vomited everything he ate. After consulting with doctors and knowing that this could be due to the strong anti-tuberculosis treatment hardly tolerable for an individual of this low weight, we brought Rahul and his parents back to their home.

Five days later, when I visited their home anxious to see his progress, I realized Rahul had not tolerated any food or drink yet. Not knowing what to do, I called Dr. Sachin, who told me to take the child to the district hospital. There, with a slight observation, Dr. Sachin decided to place a nasogastric tube to put food directly into his stomach.

Two days after being admitted in the hospital, and after checking his body began to tolerate light foods again, Rahul and his family returned back home.

On April 9, accompanied by Jaimie, I went to show one of my greatest local treasures to my family who had come to visit me in India: I wanted to introduce Rahul to them. Rahul interacted with his parents, responding to stimuli, even tried to move his hand when we told him happily "Tata, Rahul!" which means "bye, Rahul!" in Hindi. Rahul slept all the time. His condition was still critical, but he was out of danger.

From then on I did not spend a week without going to see this baby that I loved so much. Rahul's cheeks were almost as any other child´s of the same age, his shunt couldn’t be seen going from his brain to his abdomen as it did before.

Just a month before leaving India, I felt something I had not felt in three and half months I had spent there. I found Rahul so well that when I saw him I felt a huge inner peace and I thought that once the time came, I was ready to leave that country, and thus, that unforgettable experience. I really felt my goal, made before my trip to India, achieved: I had contributed to the survival of a child who would have died without our help! 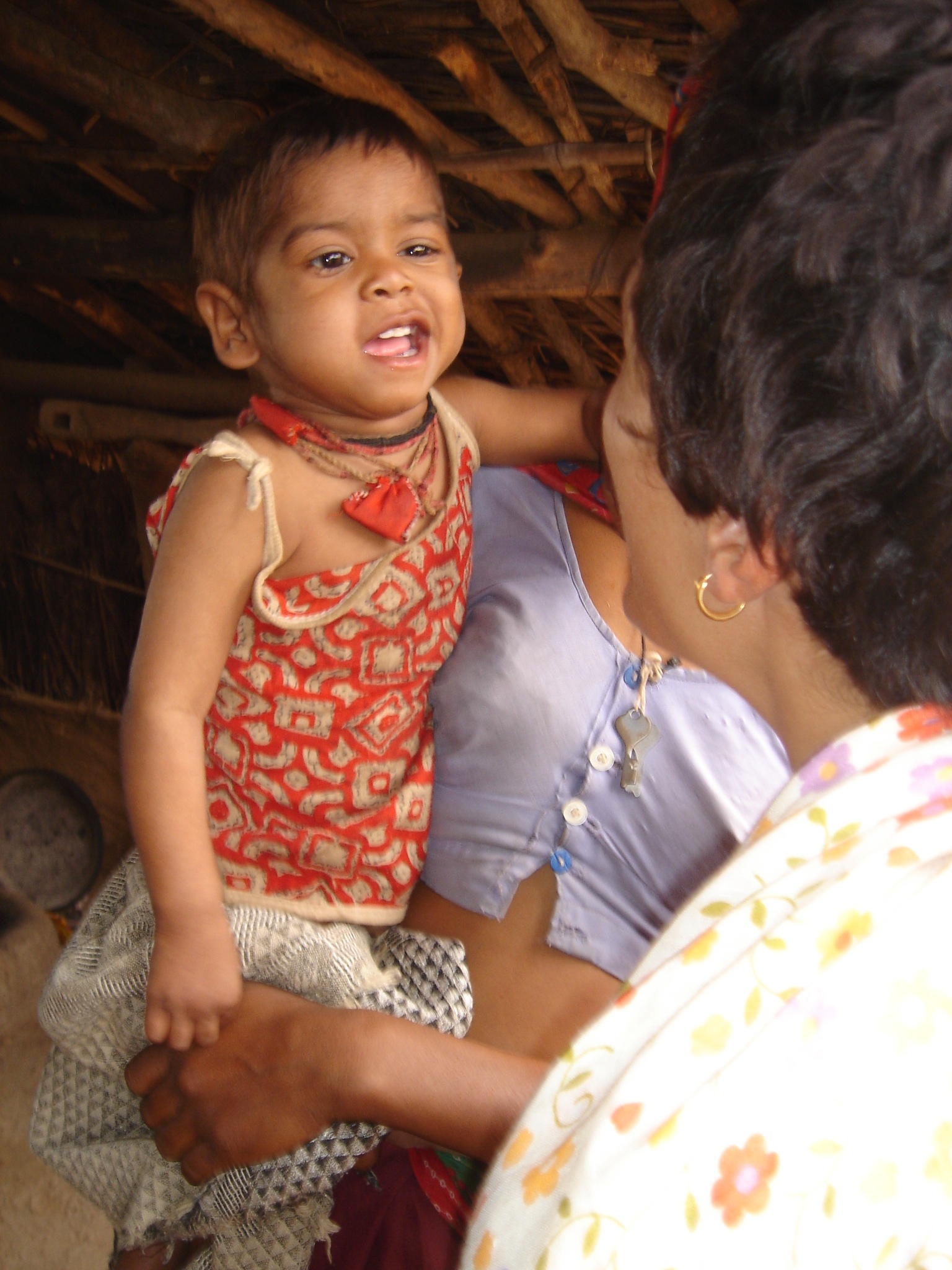 Photo: Rahul in May of 2012 after three months of treatment

I saw him for the last time two days before my departure. His right side was still slightly affected: his smile was crooked to one side, he couldn’t move his eyes to the right, and the mobility of his right hand and foot was reduced.

Unfortunately, due to reasons beyond our control, Rahul passed away someday in mid-October after his mom gave birth to a baby boy. Reincarnation? We did all that we could. We saved his life once and brought him back from the dead. He fought so hard for long months of pain, but just couldn't keep going.