Founded in 2012, Real Medicine Foundation India’s Rahul Trust supports children with health problems and helps them to get treatment. Over the past 2 months, RMF has identified and is working with 5 children from Barwani District in southern Madhya Pradesh.In June and July of 2012, RMF support enabled follow up and treatment for 3 children from Barwani District, Madhya Pradesh:

Mohit is from Kalyanpura Village Block and District Barwani. He is 6 years old. His mental development is stunted and he cannot speak. He has no control over urination and bowel movements nor can he do things such as eating by himself, buttoning his shirt, or putting on shoes. While he can walk, he often falls and generally does not walk much. His parents have taken him to doctors in Barwani and in Indore, and once to a psychologist and to an ENT specialist looking for help for their child. However, because psychological care, or care in general, is often hard to get in rural districts, a diagnosis was never given.

With support from RMF, on June 19th, 2012, Mohit was shown to the Psychiatry Department at the M.Y. Hospital in Indore. The consulting psychiatrist said that mentally Mohit shows the development of a one year old child. He advised to perform a CT scan. This has been done and reports are awaited. The parents will return in a week to discuss results with the doctor.

On June 26th, Mohit’s parents returned to Barwani to go collect the CT scan reports and to show it to the doctor. On July 6th, a doctor reviewed the CT and recommended additional tests.

On July 26th, Mohit was taken to Psychiatry Department in M.Y. Hospital where Dr U Sardesai asked for an IQ test and an EEG to be conducted at another facility.  Based on the results of both, the psychologist reported that Mohit’s IQ has improved from a year before. The EEG test indicated that there was no abnormality present and should be reviewed by the concerned psychiatrist.

Based on these results, Mohit is eligible for a disability card which will provide support to his family for special education based on his needs. This card is issued by the state government, under the consultation of the psychiatrist at M.Y. hospital. He is scheduled to go for a follow up to receive this card in August, when his parents will also receive instructions on how to proceed. 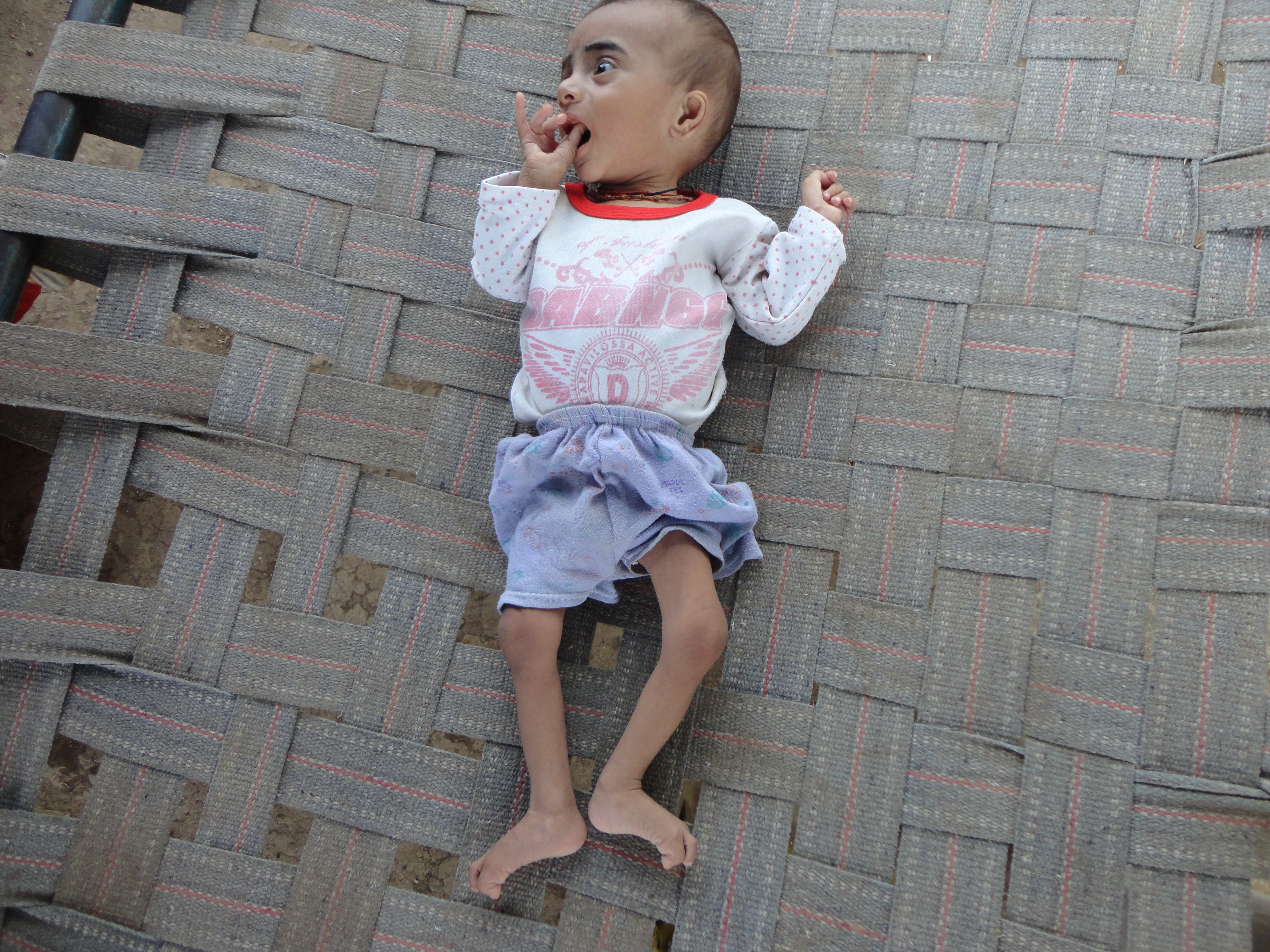 Jitendra is an 8 month old boy from the village of Nani Badwani in Barwani District. When he was born, his anus was not big enough, so doctors at Barwani Hospital performed an operation to dilate, but were unsuccessful. A hard mass had formed in his abdomen.

With these serious complications and Jitendra falling in the SAM (severe acute malnutrition) category according to his MUAC (mid upper arm circumference), previous admissions to the NRC had failed to resolve neither his malnutrition nor his other complications.

Jitendra was referred to the District Hospital in Barwani. The doctor said that the hard mass is of particles of stool accumulated in the rectum. He recommended for Jitendra to go the Paediatric Surgeon at M.Y. Hospital Indore.

On July 6, 2012, RMF staff again accompanied Jitendra to M.Y. Hospital to follow up after his stay in the NRC (nutrition rehabilitation centre). After consultation with the surgeon in M.Y. Hospital, surgical correction of the constriction was recommended, however the family declined immediate admission because of obligations at home.

On July 26th, the family returned to M.Y. Hospital, and Jitendra was admitted. The surgeon asked for x-ray tests as well as an Ultra Sonography. While assessing the results of the sonography and the x-rays, the doctors advised an admission of 2-3 days before recommending their next course of action.

Following a review of the test results, the surgeon considered the opinion of the paediatrician as well as the anaesthesia specialist. Because of his malnutrition, the doctors where not comfortable proceeding with general anesthesia.  They advised for a stay in the NRC so Jitendra could gain weight for the surgery.   Jitendra was admitted to the NRC at M.Y. Hospital for a 14 day stay to gain weight. RMF is providing financial support of Rs. 100 per day to make the family’s stay more comfortable.

Shivdarshan is a newly identified child who has severe eye problems and needed immediate treatment, so he was referred to an ophthalmologist. With support from RMF, Shivdarshan and his family consulted an ophthalmologist in Indore on June 26th. The doctor advised admission of the child, however the family refused saying they are not prepared to stay in Indore and would prefer to consult a doctor in Barwani.

Following the trip to Indore, Shivdarshan’s family consulted doctors at Saraswati Eye Hospital in Barwani. The doctor advised the parents to go back to the Eurobond Hospital in Indore for the surgery of the cataract.

The child was taken to Aurobindo Hospital in Indore where he was admitted and asked for several routine tests. After the tests, the doctor decided to conduct cataract surgery on July 30th.

With financial support from RMF to cover the costs of the operation and equipment required, Shivdarshan’s surgery was successful and he is now recovering at home with his family.

After his recovery in one month’s time, Shivdarshan will undergo another surgery to correct the cataracts in his other eye.

In addition to the 3 children who were taken for treatment, RMF also referred and followed up with 2 children from Barwani with Severe Acute Malnutrition and complications. However, despite the diligent follow up of RMF staff, one of the largest barriers preventing treatment of chidren in Madhya Pradesh is the time required for children and their families to stay in hospitals away from their villages and other family support. In the case of serious complications and surgeries, higher care centers are only available in cities; in the case of the districts where RMF works, Indore, which is 4 hours travel by jeep.

For instance, 2 children from Barwani were taken to hospitals in Indore only to refuse treatement because of family obligations in their villages.

Kareena is from Cheravi Village in Barwani. Two years ago, Kareena Shivram was identified by RMF CNEs (Community Nutrition Educators) suffering from SAM. However, because she had not recovered during her first stay in an NRC and subsequent visits to both government and private doctors, Kareena’s family had lost faith in the health system and decided not to pursue further treatment for Kareena.

However, RMF CNEs continued to follow up with Kareena and, with consultations from physicians in Barwani, Jhabua, Ahmedabad, and Indore, discovered that Kareena had two underlying complications causing or contributing to her malnutrition.

On investigations in the NRC in Barwani Hospital in January 2012, it was found that Kareena suffered from tuberculosis. Despite her stay in the NRC for 14 days, she did not gain weight. On further investigations in District Hospitals Jhabua, Baroda, Gujarat and in CHL Apollo, Indore, it was found that she suffered from a congenital heart defect. To correct the defect, Kareena requires surgery, but both her malnutrtion and TB  prevented  the operation.

Doctors advised her family to stay in the Nutrition Rehabilitation Centre to recover from her malnutrition as well undergo treatment for her tuberculosis.

In the meantime, her case was followed up with the CMHO’s office for the Chief Minister’s Scheme for Children with Heart Diseases and Rs 75,000 got sanctioned for her heart surgery.

Now, she is free from TB and she has gained weight to 5kg, and was taken to the cardiologist at M.Y. Hospital, Indore, who then referred her for surgery to CHL Apollo, Indore.

On July 10th, 2012 the family was taken to the hospital for Kareena’s operation. Before admission, the concerned doctor, Dr Trivedi, an interventional cardiologist, sought the advice of the attending paediatrician as well as the other specialists. Looking at the child’s low weight and history of malnutrition and TB, the doctor anticipated complications would arise and asked to arrange an additional Rs. 50,000. The doctor anticipated a 3-4 days’ stay at the ICU after the operation. After confirming the need for the extra funding and arranging for payment, the family refused to stay in the hospital for an extended period of time because of their commitments during sowing season, which coincides with the arrival of the seasonal monsoon and is the only oppurtunity many families have to earn income.

The child was taken to the paediatric ward of the CHL Apollo where the paediatrician started medical treatment. RMF staff continued to follow up with the family to pursuade them to come to the hospital for treatment.

Vikram is a 9 month old boy from Village Awali in Pati Block of Barwani District.  He is severely malnourished and when crying RMF’s CNEs and his parents observed that his hands and feet became stiff.

He was brought to the District Hospital Barwani. The doctor asked questions to the parents and advised the family to stay in the hospital for observation and diagnosis. However, the family would not stay so RMF arranged for transport to Indore.

This child was taken to Indore where a doctor from Chacha Nehru Hospital checked him and advised admission. Again, however, the parents were not ready to stay in Indore. Despite the needs of the child, the pressure to work at home and mistrust of health services is often a barrier too difficult for counselors to overcome.