In the final quarter of 2014, our MCH center attended to 3,105 women, men and children in its OPD. A total of 2,807 (90.4%) were women, 14 (0.5%) men and 362 (9.1%) were children of which gender distribution was somewhat equal. Although this is primarily a women’s clinic, we do not turn away any male patients should they present at the premises with an emergency medical problem of primary health level.

MCH Statistics: In the reporting period of these past three months, antenatal services were sought by 258 women while 172 came for post-natal checkups. Family planning services were provided to 98 women while 64 women sought advice and guidance for both primary and secondary infertility issues. 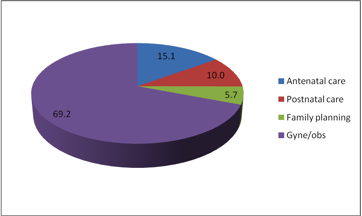 The main services sought in our MCH center are a range of gynecological pathologies which were provided to 1,186 women. They include: 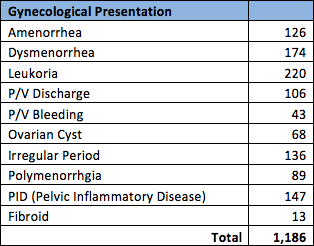 Primary Health Statistics: A total of 1,351 women and children were treated for a variety of primary health problems; interestingly the most common complaints were general body aches and a sense of weakness accounting for nearly one quarter of the statistics (21.6%). As discussed in our earlier reports, these are a group of symptoms that often have no real pathology but are used by patients to describe what we take as signs of depression. At a primary health level, we do not have staff qualified to diagnose depression which is why we have placed this as a category titled as such. The surge in these complaints amongst women is not surprising as most of them came as IDPs in this area last winter thinking that this displacement would be a temporary measure while the military rid their areas of residence of the Taliban terrorists. Unfortunately this ‘temporary’ period is now over a year old and there is no sign of success on the horizon. Their frustration and lack of control over their own lives is leading to depressive states of mind. At our OPD level in the MCH center, we can only provide them with vitamins that act as placebos and all the while augment their poor diet.

Anemia (12.4%) came as the second most common complaint while Diarrhea, which dominates the scene in summers, was at third place (9%) attributable to the winter season. Other ailments presented were: 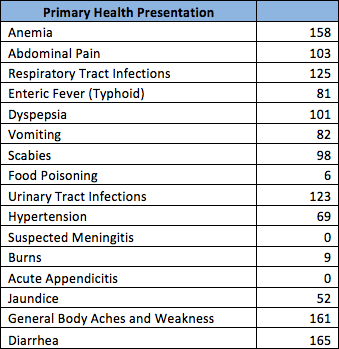 Non-RTA related injuries were presented by 11 patients. Our location off the main road means that we are often presented with road traffic accidents and in this 3-month period only 3 cases were provided with immediate emergency care. These constitute the men seen at the centre.  The total number of referrals during these three months was 26 patients.

Pathology Lab Statistics: The pathology lab conducted a total of 525 routine investigative tests in this three-month period.  The table below shows the breakdown: 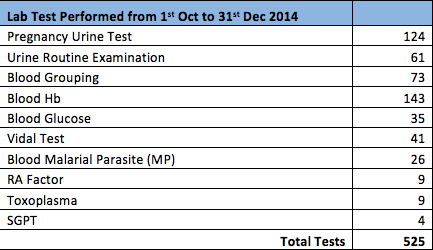