In the first quarter of 2015, a total of 3,078 women, men and children frequented our MCH center during OPD hours. The percentage distribution between women (65.7%) and children (33.3%) has remained somewhat the same as in the previous years. The local goodwill has been established this to be a total of 2,807 (90.4%) were women, 14 (0.5%) men and 362 (9.1%) were children of which gender distribution was somewhat equal. Although this is primarily a women’s clinic, we do not turn away any male patient should they present at the premises with an emergency medical problem of primary health level which is usually an accident (both road traffic and non-RTA).

MCH Statistics: In these past three-month reporting period, antenatal services were sought by 607 women while 93 came for postnatal checkups. Family planning services were provided to 32 women while only 11 women sought advice and guidance for both primary and secondary infertility issues. 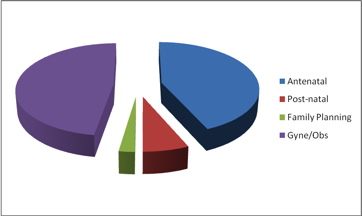 The surprising aspect of this quarter was the sharp increase in antenatal and postnatal care sought in our MCH center and the concurrent decrease in the demand for family planning services. The OB/Gyn category covered the following pathologies which were provided to 665 women. They include:

Primary Health Statistics: The number of primary health cases presented at the center totaled to 1,645 women and children. In this quarter over the winter season, the most common complaints were respiratory tract infections (23.4%) followed by diarrhea (15.3%). Anemia (13.5%) came as the third most frequent complaint congruent with the poor diet of these IDPs. Other ailments presented were:

Non-RTA related injuries were presented by 9 patients. Our location on the main road means that we are often presented with road traffic accidents and in this 3-month period a total of 17 cases were provided with immediate emergency care, all men.  The total number of referrals made to the MCH were10 patients.

Pathology Lab Statistics: The pathology lab conducted a total of 491 routine investigative tests in this three-month period.  The table below shows the breakdown.


Ultrasound Investigations: This is our second quarter to offer ultrasound services to our patients and the statistics show a tremendous leap from the last quarter (which actually constituted of two months as the ultrasound machine came into operation in November 2014). The word of ultrasound services, the first of its kind at a not-for-profit health facility, spread in the community like wildfire with many women referred to us by other NGO clinical setups and government based hospitals. These women came to us seeking an ultrasound only but then also chose to have a check-up. A total of 590 women utilized the ultrasound services and the investigations conducted were as follows:

Third Party Evaluation:  The trend of disease presentation in this quarter is markedly different and this difference became apparent from as early as the first month of the quarter (January). Although the average numbers of patients being reported were the same, surprise M&E visits by the head office on different days revealed that the number of patients observed were fewer than the official records.  However, use of drug supply and hence its monthly demand was unchanged. We had had a change in staff where we had hired a new LHV in replacement of the previous one who had to resign for personal reasons. However, in our opinion at the head office, keeping the administrative M&E reports aside, the degree of change in disease presentation was very important as it was too marked to be a simple attribution to the change of personnel since diagnosis of case presentation follows medical and technical guidelines other than personal opinions. It needed to be investigated.

We hired a consultant as a third party evaluation party for a period of 10 working days. We had to limit our selection to a female consultant in keeping with the women-only arena of our MCH Center. Also female patients would not object to a woman taking photographs. An observership-participation methodology was the approach adopted for the evaluation process and was based on electronic monitoring and evaluation to give a continuous ‘real time’ report of every hour of every working day during this consultancy.
Requirements for this e-M&E was a smart phone with a 3G connection and every patient receiving treatment was photographed and sent by the WhatsApp application to the head office in real time. This was followed by the end-of-the-day of both the patient record and the Pharmacy record registers. The Pathology lab and Ultrasound register records for each day were also submitted simultaneously.

Results and Conclusion: The number of women and children frequenting our MCH Centre were consistent with the average number reported in the morbidity reports and hence the drug stocks statistics exhibited congruency along the same lines. The numbers of tests performed in the pathology lab were similar to the previous quarter but there was a tremendous increase in the ultrasounds being conducted. Here it became interesting in that the number of women seeking ultrasound were significantly higher. The word has spread in the community, including in the other health care facilities, private, government as well as not-for-profit in the district and pregnant women were being referred to us for ultrasounds. Naturally every woman needed to have an antenatal consultation as well and hence the explanation for the sudden increase in antenatal and postnatal visits.