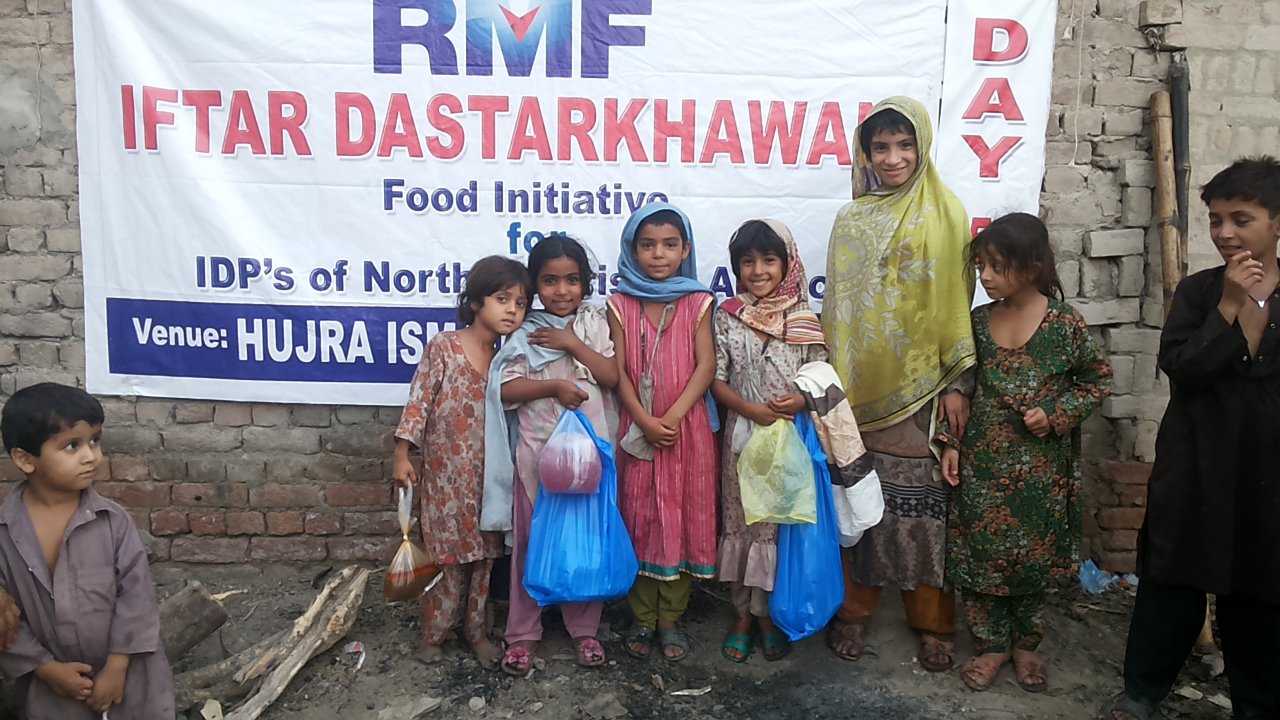 Waziristan, a mountainous region of northeast Pakistan is one of the thirteen semi-autonomous Federally Administered Tribal Areas (FATA) governed by Pakistan's Federal Government through a special set of laws. It is divided into North and South Waziristan. Geographically, Waziristan’s southern border lies with District Bannu, Tank, Lakki Marwat and Dera Ismail Khan in KPK while its northern border is the porous line of boundary with Afghanistan. For the past decade or so, Waziristan has been in the global focus for Taliban militant activities and targeted drone attacks. South Waziristan was rid of Taliban by a military operation in 2009 leading to North Waziristan becoming the cloistered seat of the Taliban.  http://newsweekpakistan.com/north-waziristan-before-and-after-the-taliban/

After months of unsuccessful peace talks, the Pakistan Army launched an offensive in North Waziristan titled Zarb-e-Azb on June 15th, 2014 that has led to the displacement of 92,702 families (over 800,000 persons) in just one month. According to the FATA Disaster Management Authority (FDMA), nearly 74% of these IDPs are women and children and the majority of these families are residing in Bannu District with some moving to Dera Ismail Khan and Tank and Kohat Districts.

According to OCHA, most the IDPs are living with friends and families, many having opened their ‘hujra’ doors to these families. This also means that the house rents have shot up, further adding to the woes of the IDPs. The government established a refugee camp in Bannu that has attracted only 28 families due to its inadequate facilities and security. Our needs assessment as well a PHC (Pakistan Health Cluster) meeting on the 1st of July identified a food crisis as the critical issue since the displacement took place with the advent of Ramadhan and its inherent price hikes. Although the Pakistan Army, armed with food rations supplied by the UAE Government have begun to distribute food on ground, the FDMA has requested humanitarian organizations for assistance to support the provision of food packages, non-emergency health kits and non-food items. 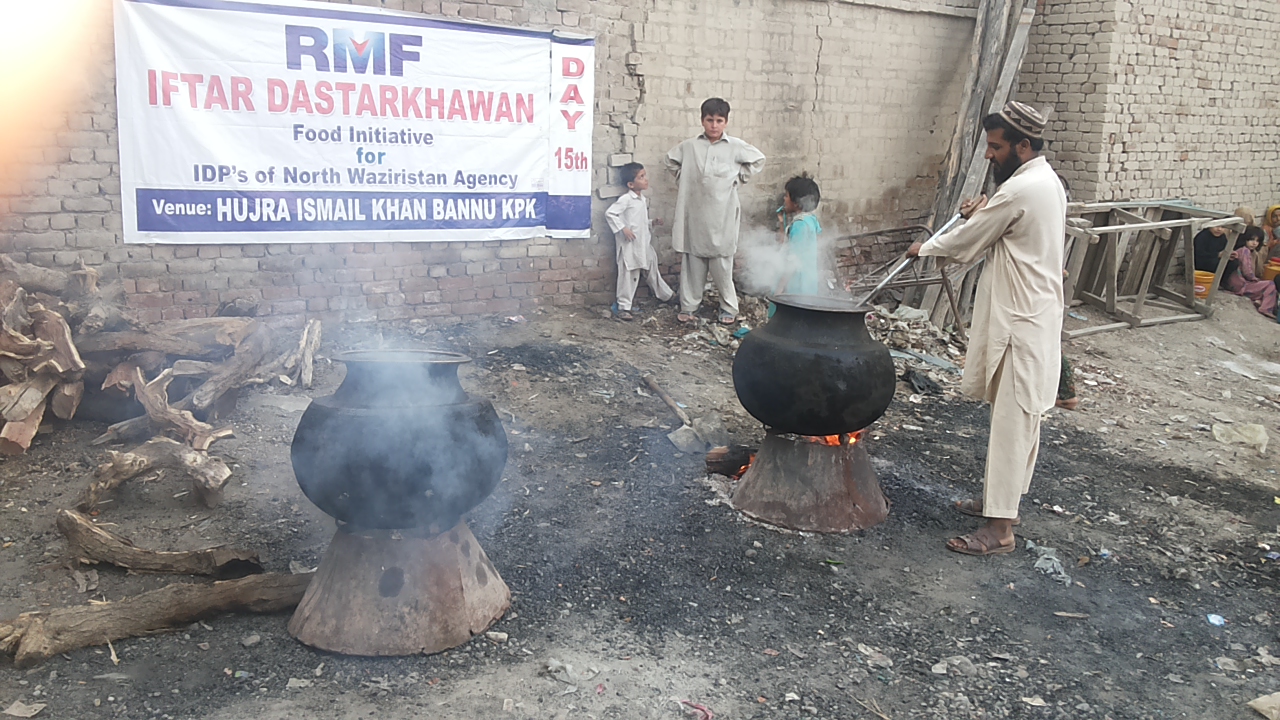 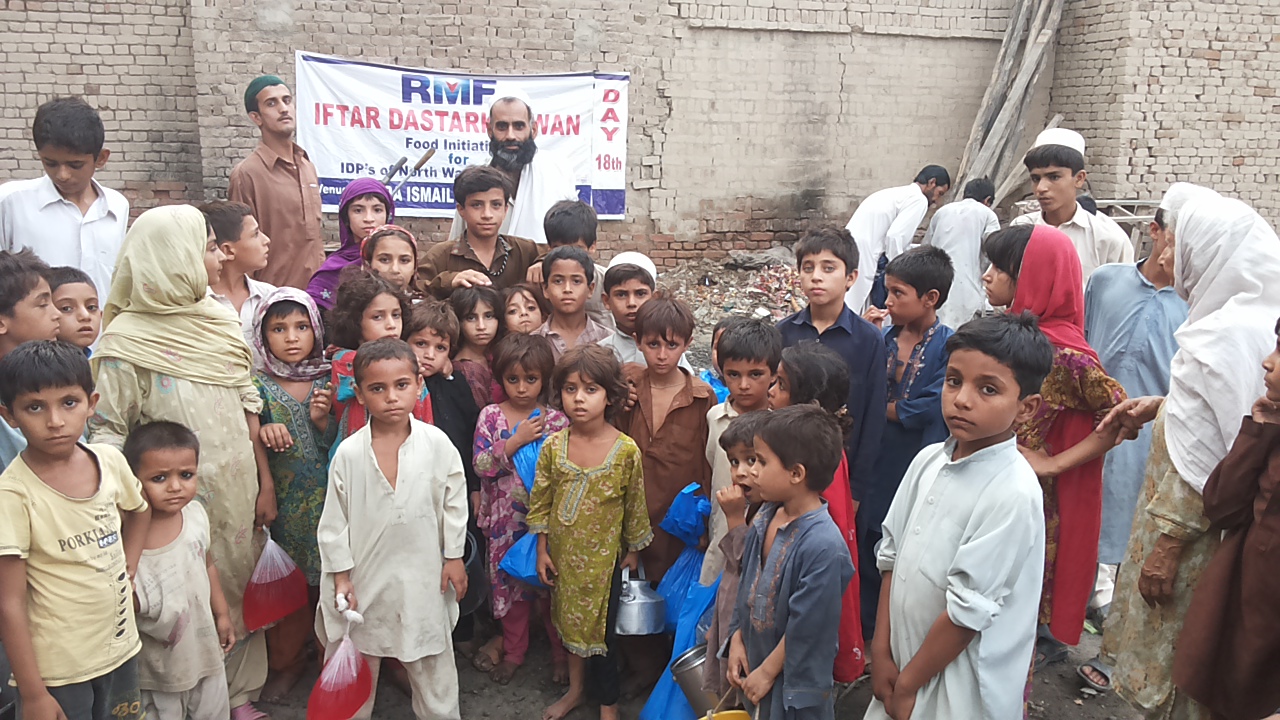 Our needs assessment team determined that although food rations were welcome, many IDPs had no cooking utensils and heating/cooking arrangements as most had to flee for their lives without their possessions. In the month of Ramadhan, their immediate need was cooked food for the two times of eating i.e. Sehri and Iftari. With generous Zakat donations by Muslim brethren in Pakistan and the UK, RMF launched the “RMF Iftar Dastarkhawan” on the 10th of July 2014. A local philanthropist, Mr Ismail Khan, generously opened his residence (called Hujra in local language) as the premises of this food initiative. 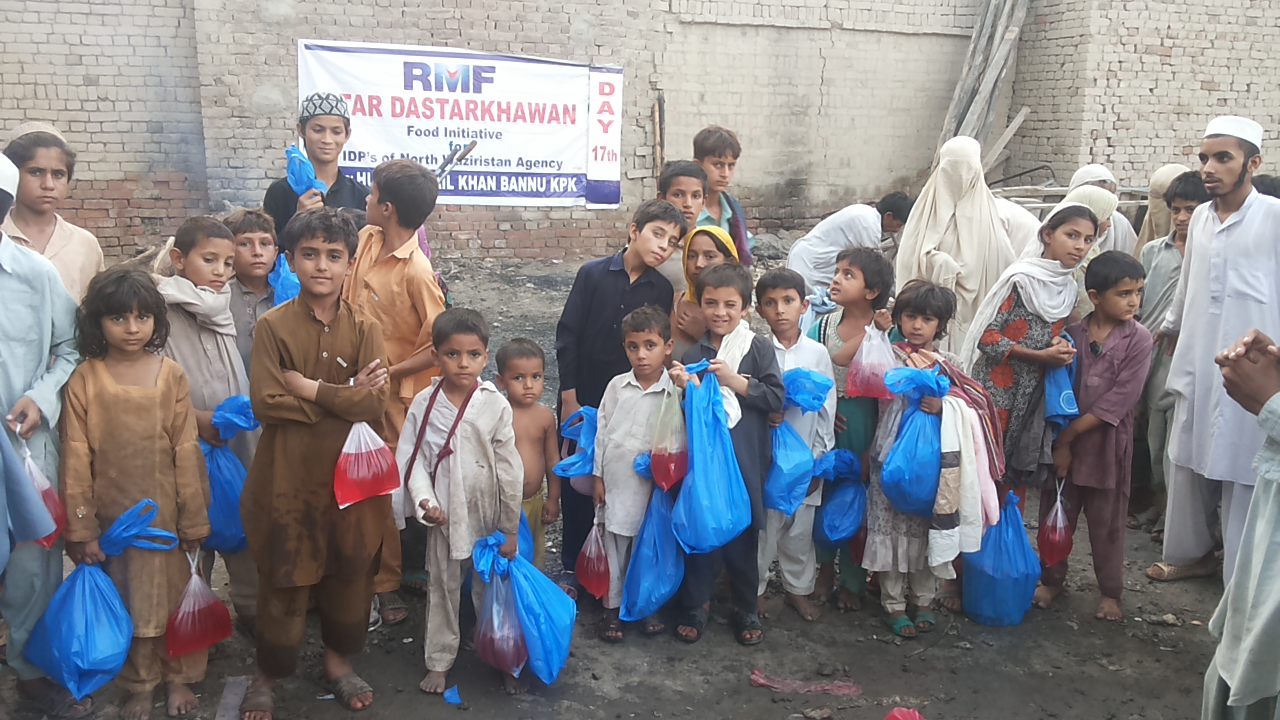 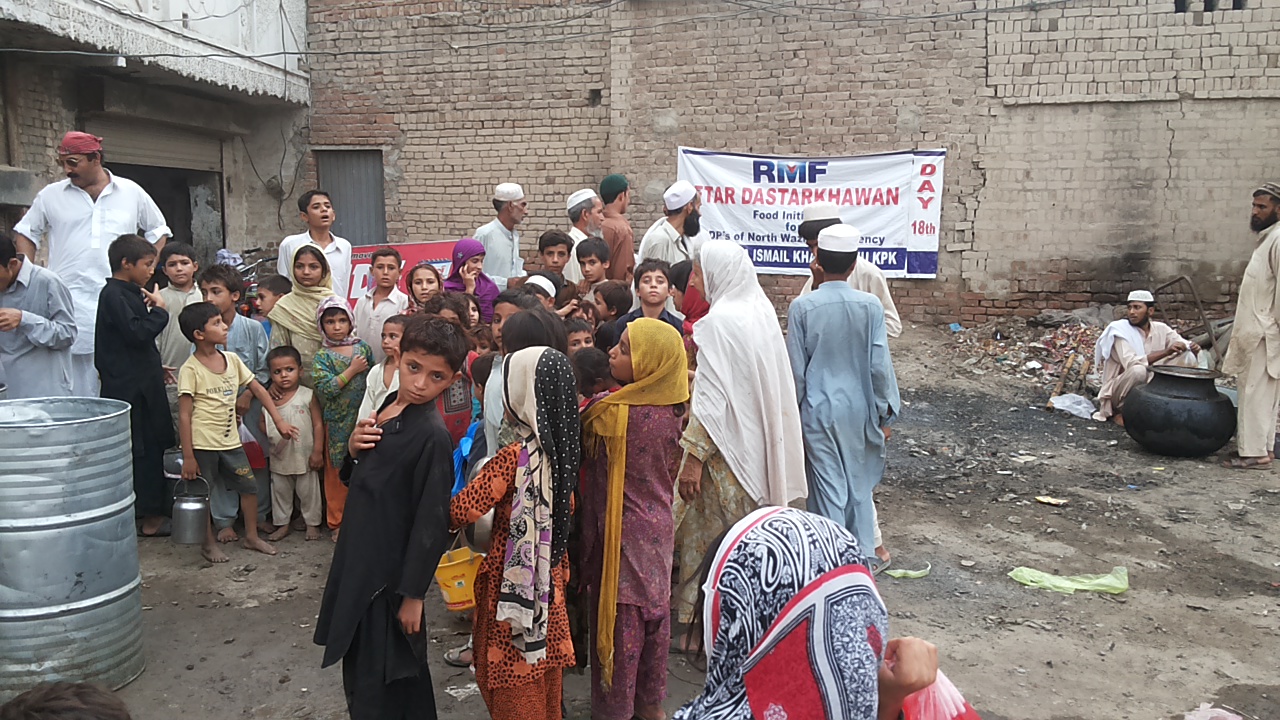 In the first six days from 10th-15th July 2014, we provided chicken rice pilau, dates and juice to a total of 690 IDPs (approximately 115 persons per day). During that week, we learned that most of the IDPs we saw were men and children, mostly boys, as the cultural norm dictated that women and girl children were to stay out of the public space. This meant that most women and children, especially girls, were not being accessed and thus did not receive food. Again as per this very strict and patriarchal culture, the practice that men and boys eat first and leftovers are for the women and girls was exhibited by the fact that after the dastarkhawan the attendees would come over and ask for packets to take home to their families, a fact that was beyond our budget. 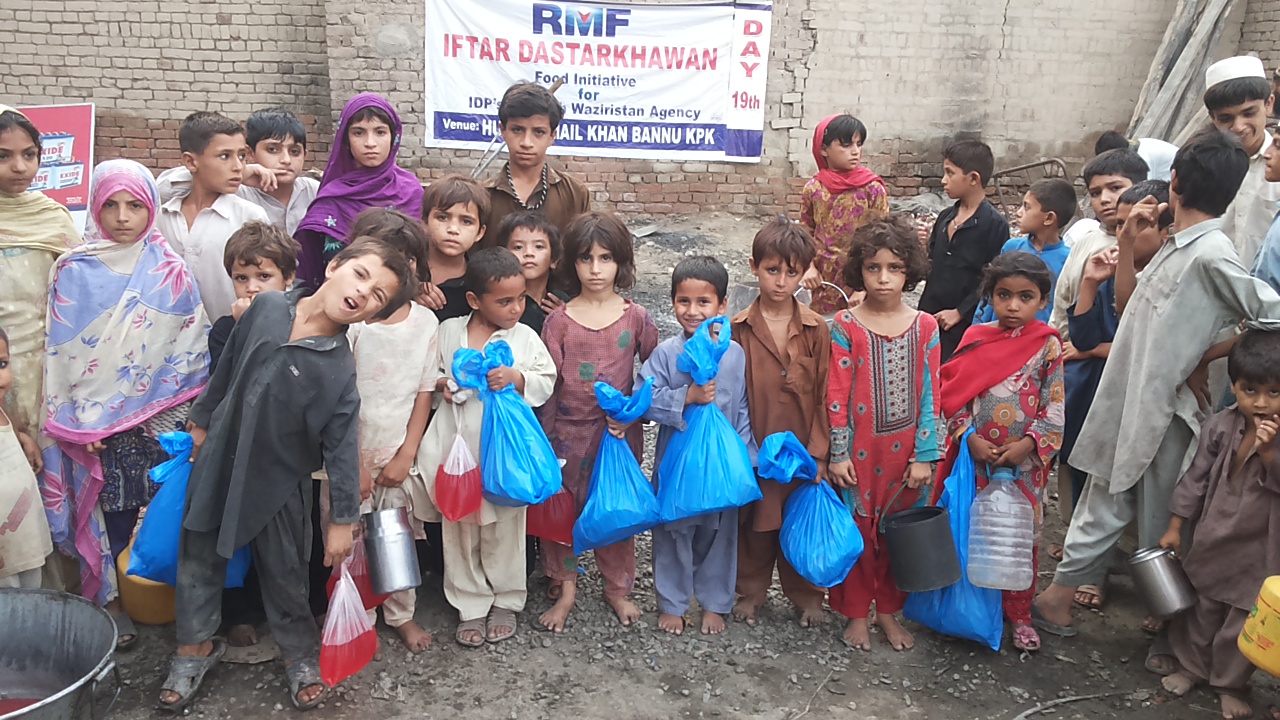 The total number of people served with cooked food under our Food Initiative for IDPs in Bannu has been approximately 2500 over a period of 20 days at an average of 125 persons per day. Of these, 74% (1850) were women and children (15 years and younger) and the remaining 650 were men. 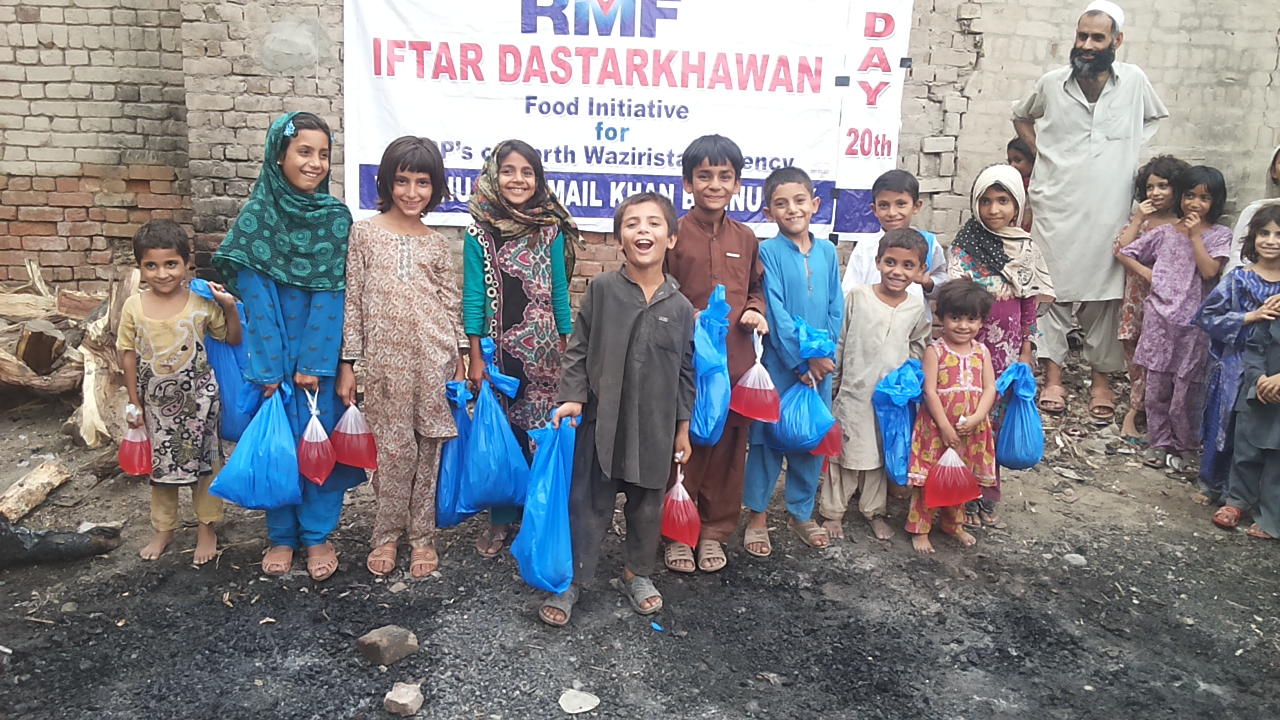 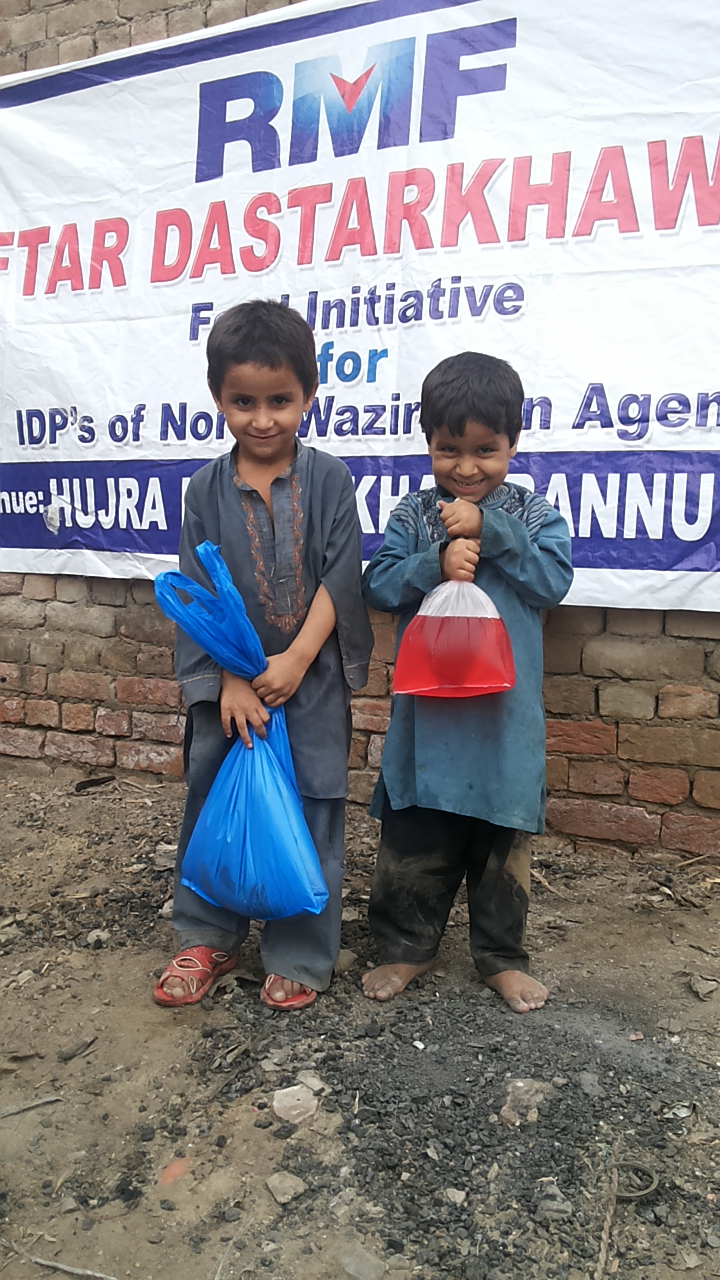 The military operation Zarb-e-Arb is expected to come to an end soon, as per the government report but repatriation of the IDPs is going to be an uphill task, as we have seen in previous instances. Therefore this very vulnerable population is expected to be on ground for another 2-4 months at least and hence will be in need of all of life’s necessities.

RMF has indentified and registered 50 families who have not registered with other charity organizations and government agencies that have stringent requirements of identity cards and family registration cards to make them eligible for support. Many of our families are female headed, having lost the father or male head of family to this war against terror. As a result these women seldom have identity paper/family registration papers and to make things worse, they are not safe to enter the public arena unaccompanied.

We are providing them with monthly food rations that consist of the basic food items such rice, flour, cooking oil, pulses, spices, salt, tea, sugar, etc. The quantities estimated to suffice an average family of 5-6 persons are in the process of verification.