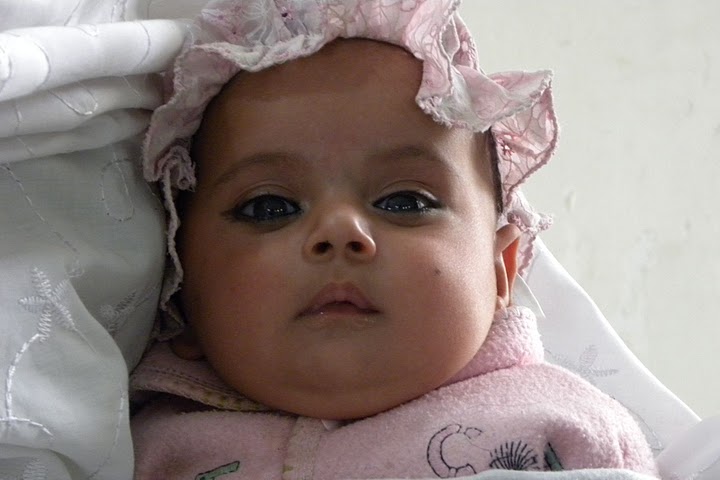 photo: Baby Mashal in the arms of her mother in the first post-natal visit to the center

“Baby girl born in the centre”. That was the good news that we got on the first week after Eid Holidays in August. Nineteen-year-old Shaista Bibi is a new entrant to the IDP community in Tarru Jabba. She is basically from North Waziristan and in the 7th month of her first pregnancy she became a widow in June 2014 soon after when the Pakistan military launched an offensive against the Taliban titled Zarb-e-Azb.

Her young 21-year old husband Ali Haider, was on his way back from their fields ready to reap the crop for the year when a sudden military-Taliban exchange put him in the line of fire. He sustained an injury to this chest which he succumbed to within a day as there was no functional healthcare facility in this Taliban-infested area.  Not even given a chance to mourn him, the rest of the family was evacuated by the military and herded off with large group of fellow victims and unceremoniously dropped to an IDP camp in Bannu 4 days later. Shaista’s mother lives in Nowshera and having lost all, she chose to return to her natal home.

The strenuous journey and the tremulous events that shattered her life were too much for her to bear and she collapsed, unable or unwilling to get out of bed. She complained that her baby had not moved since that terrible day when the young father-to-be was brutally killed.  Convinced that the baby was dead inside her, she began to exhibit suicidal incoherent ranting. Worried, her mother brought her to the RMF Health Center and her ante-natal visit showed the fetus to be in perfect health and all looked right on the spot. Uplifted with this news, Shaista Bibi began to experience the first flicker of hope and anticipation after the death of her beloved. The unborn life within her demanded that she be strong and able. Her mother informed us that the very next day, Shaista got out of bed on her own without any cajoling and had started to eat and walk around within the house.

On August 12th, Shaista Bibi gave birth to a lovely baby girl who she immediately named Mashal, meaning “a ray of light” as this child gave this young mother the first ray of light and hope that life is meant to be lived with love and peace. Delivered safely and with ease, Shaista left the clinic the same day. She came for her first post-natal visit a couple of weeks later. Breast fed and well clothed, baby Mashal was the epitome of health and what was more important, Shaista Bibi, totally immersed in new motherhood is coping well with the loss of her husband and her life seems to hold promise again.