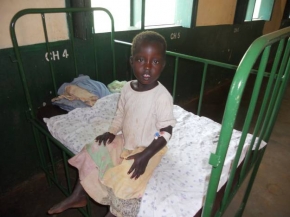 Photo: One of our child patients at the Health Center, see Success Story below

Photots of painting of the Health Center buildings (wards, offices, beds, stands, gate, and toilets), repair of the roof leakages, and welding of the broken beds. 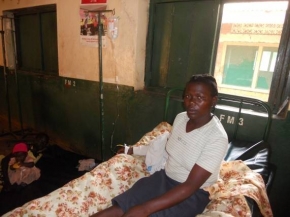 Nekesa Mildred, a 22 year old woman and a refugee in cluster H, was admitted to the ward and diagnosed with severe malaria. Her treatment was based on the following medication: i/v Quinine 600mg at 150mls in 5% Dextrose, Quinine tablets 600mg six days, Tablet Panadol 1gtds 3/7.  She was discharged after three days with a full recovery.

She is one of the refugees who has seen and benefited from the services of RMF/WCF regularly:

“Real  Medicine Foundation in place and in with serious actions on the ground treating and curing us from such rampant attack of diseases like malaria, cough, intestinal worms, among others which could have taken many lives without their help.  I am happy now because I was welcomed with love and care and I got cured in soft bed of which I do not even have at my own home.  If we had no drugs at the health centre, then my life was finished, I had no little money with me at all that I could afford to go to a private clinic to buy drugs.  I am only suffering here with my two children in the camp, my husband just disappeared mysteriously running away from responsibilities at home, now I have to take care of myself and the two children, when we fall sick, my worries and tension, thanks be to RMF because we have never missed drugs at the health centre.  I thank RM, and all its honest staff for they are committed for refugee well fare.” 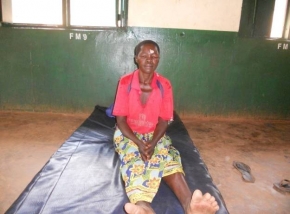 Akello Night, 43 years old and an internally displaced person (IDP) from northern Uganda to here in the camp, now residing in ranch #9, was admitted to Panyadoli as a result of an assault wound on her face and with multiple sexually transmitted diseases. Her treatment was based on PPF 0.8 OD times five over seven (5/7) days, tablets NSAIDs 2/7, Tablets Flagyl 400mgs for 30 day, She was discharged after 5 days of counseling and due to her improvement.  Many of the IDPs have returned back to their homeland in northern Uganda, but Akello and her family remained in the settlement due to, amongst many things, the better medication and treatment at no cost at Panyadoli Health Center.

In Akello’s words: “Ever since IRC constructed this health centre we never missed drugs until IRC withdrew from it, and when IRC withdrew, I was also about to leave the camp but where could I find affordable medication, poor me and my poor family leaving on one meal a day!!!  The only hope restored by Dr. Simon in charge of the health center that there was another organization, Real Medicine Foundation, ready to supply the drugs to the health centre to bridge the gaps.  My happiness was experienced again and my family was firm to have more years in the camp”.

Whenever Night is asked why she is still in the settlement when other IDPs have gone to their homeland, her only answer is, affordable health facility at no cost is her best priority for the good of her health and family.  The IDPs who left this settlement always come back and share stories of the poor medical facilities they have in the north with no drugs.

Anena Hellen, four years old and a refugee in cluster K, was admitted and diagnosed with severe malaria. She had once suffered from malnutrition but later recovered due to the support of the therapeutic feeding centre by UNHCR and the support of RMF in terms of drugs, nets, and clothes to the feeding centre in Panyadoli Health Centre. Her mother said how hard life was as a single mother but yet was so grateful when all her and her child’s sicknesses were always attended to successfully at Panyadoli, and she has never spent any money to purchase medicine.  Hellen’s treatment was i/v Quinine 160mg in 160ml in 5% Dextrose 8 for 3 doses, Tablets Coartem ii bd times 3/7, Panadol 1/2tds times 3/7, and she was discharged after 3 days due to her successful treatment.

The mother confesses: “The bed sheets I cannot afford for my child at home, and she has a chance to use it at the health centre and her life is in good medicine treatment, good bed, good bed sheet, good mosquito net, all these provided by health centre by support of RMF.  Long live RMF in the camp.” 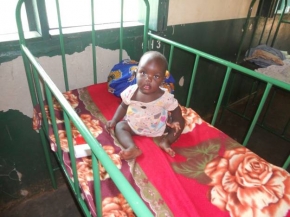 Lamunu Silla, a six month old and a refugee in cluster D, was admitted and diagnosed with severe malaria and respiratory tract infection. Silla was born to a young mother who had dropped out from Panyadoli Secondary School and became pregnant from an adult, who later run away when this case was reported to the police and filed as defilement.  Silla’s mother was left with her pregnancy in God’s mercy and in her grandmother’s care.   Silla’s mother lives in extreme poverty, they depend on UNHCR’s food supply to survive and Panyadoli Health Centre for their health.  The day that RMF and UNHCR stop their services, they will have a very hard time surviving. Silla’s treatment was based on Coartem I bds times 3/7 tablets Panadol ½ tds times 3/7, tablets ½ bd times 3/7, tablet Flagyl ½ bds. She was discharged in good health. 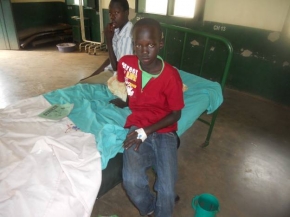 Taban Denis, a 12 years old refugee in cluster K was diagnosed on admission with severe malaria. At the time the photograph was being taken below, his brother sat close in care of him as their mother had gone home to collect food for him. Denis is one of the pupils in Arnold Primary School who benefits from RMF/WCF funds in regards to scholastic materials distributed to them every term and school fees given to the school termly. His treatment was based on i/v Quinine in 5% dextrose 8 hourly, tablets Quinine 8 hourly for six days, tablets Panadol 1g tds for three days. He was discharged healthy three days after admittance.