Healthcare for Refugees at the Panyadoli Health Clinic 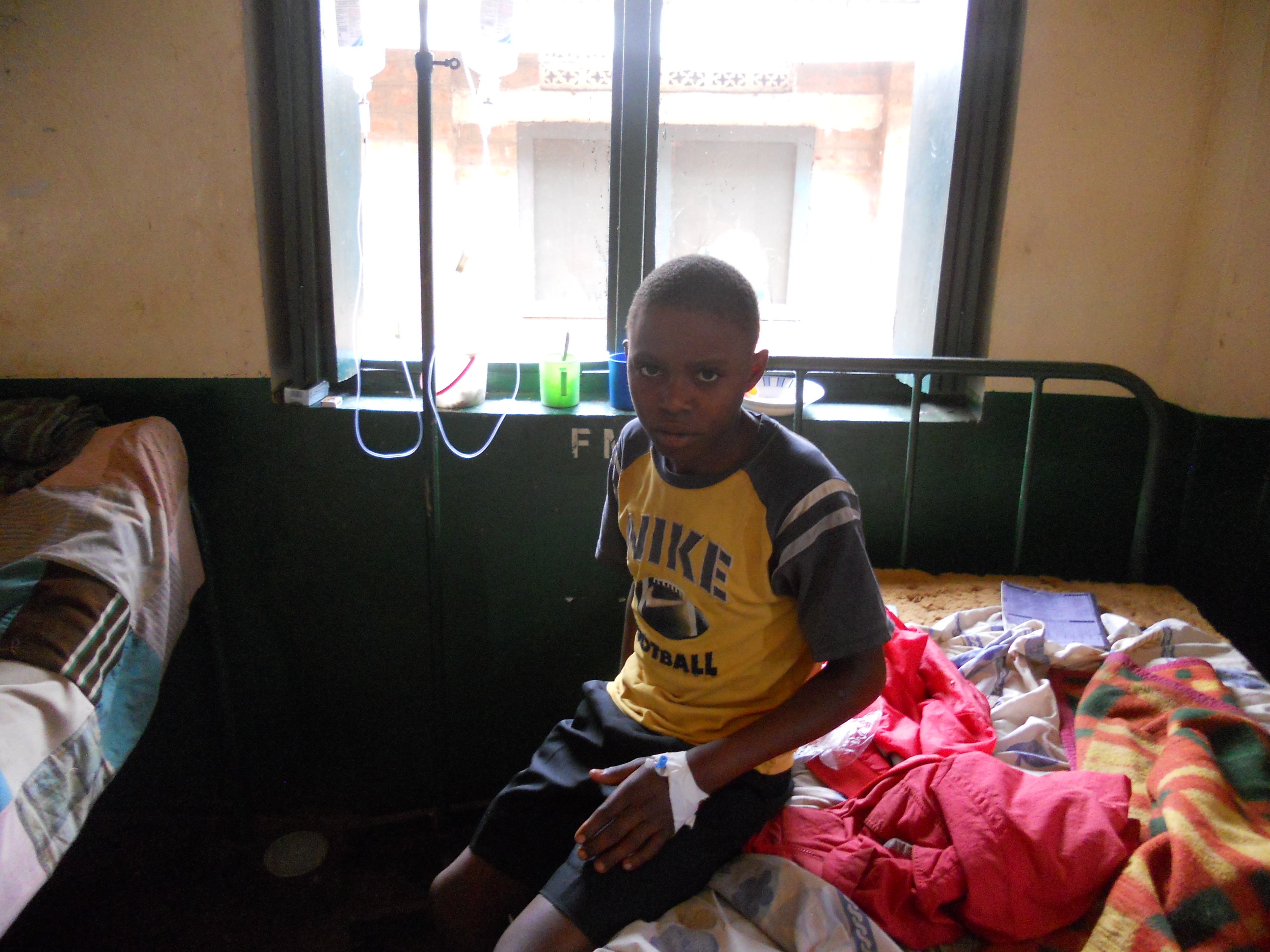 Photo: Karaoke Newton, one of our patients at the Panyadoli Health Center.

Apio Gloria, a Ugandan National IDP, 2 years old and suffering from pneumonia, whose parents are peasants depending on digging maize and beans with no extra possibilities for earning a living.  When the weather disappoints and no yield made, the family lives on one meal per day. Since they are not refugees no further help is given to them even though they live within the settlement. 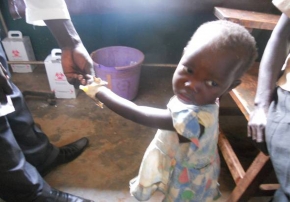 When Gloria fell sick this time, they were able to take the child to the health centre, found the drugs and the child was treated with love and care.  The diagnosis was pneumonia and her treatment was based on the following medicine: i/v x-pen 1 mega six hourly for three days, i/v Gentamycin 40g for three days, Panadol tablets ½ tds for three days, capsule- vitamin A 20000.  She recovered completely within a few days and the parents were full of joy and happiness that their daughter was able to get cured without being referred.  The worst thing they always face with referrals from the Panyadoli Health Center to the Kiryandongo Hospital is the fact that you can only find qualified doctors for consultation, but no drugs or supplies, and this makes very grateful to be taken care of at Panyadoli with no further referral.

Akongo Ann, 4 years old, and a refugee living in cluster I, was admitted and diagnosed with severe malaria.  Talking to the mother of Akongo and interviewing her, she expressed herself with tears of joy though her child was sick.  She takes Akongo to be an “RMF child” as she was narrating the story.  Akongo was born in the camp when RMF was already giving support to her parents in terms of soap, clothing, seeds, etc.  Akongo is studying at the expense of RMF in the Daystar Nursery School, and even the CROCS shoes Akongo is wearing were donated by RMF/WCF. 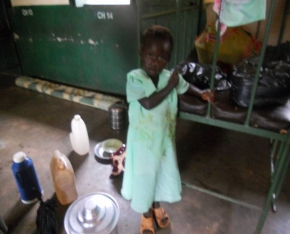 From childhood to now, Akongo has been falling sick and getting healed by RMF’s medical care and medicines.  Upon her visit to the clinic, Akongo was prescribed the following medicines, i/v Quinine 130g in 130mls of 5% pentose for three doses, Amoxicillin capsules 1td (one time three days), Panadol tablets 1td (one time three days) and after a few days she was well again.  The mother of Akongo continued to say “With all this poverty we live in, if we had another burden of buying drugs in a private clinic, pay school fees in nursery school as government does not support nursery school, the level of poverty on us would not even allow us to own clothes. Glory be to God and to RMF that has helped us carry some of our burden and poverty”.  Above is Akonogo wearing the CROCS shoes.

Jacob Labe, 64 years old, and a refugee in cluster J, was diagnosed with severe pneumonia and admitted to the ward.  At the time we took his photograph he had just spent about four hours at the health center, and was already put on an i.v. drip, and we were preparing him for the second drip.  Jacob reported alone at Panyadoli, without caretaker, using his wife’s dress as a bed sheet at the health center.  Fortunately the health center soon gave him clean bed sheets and a blanket since RMF provides these items for the patients.  Jacob is living in extreme poverty in his old age, and rarely has enough to eat.  He narrated that he had not eaten for two days, as the only food available at his home is posho and beans yet he is too sick to eat such food. 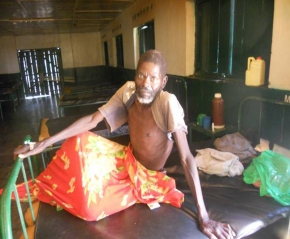 When he reached the hospital, he was received with love and care, and given a priority to see him, being aged and staggering alone to come to hospital.  He was put on i.v. fluids, given bed sheets and blankets and the community has been urged to donate whatever they might be able to,  to have better food options and see his appetite return.  His treatment was based on i/v Ampicillin 500mgs six hourly for three days, i/v Gentamycin 80g once in a day for five days, and Panadol tablets two times a day for three days.  His condition improved over the next few days and he was discharged.

Adyee Estherina, 76 years old and a refugee in cluster N, was diagnosed with GIE and admitted, she is one of those who is proud of the Panyadoli Health Center and has seen its improvement over the last 3 years.  She is Sudanese and has been a resident of the camp for more than 20 years.  She feels RMF brought life home for them. 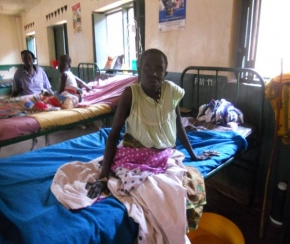 She calls Panyadoli Health Center “her healing home”; she has never been referred to the hospital for all the years she lived in the camp, with all her illnesses being taken care of at the health center.  She says that seeing RMF/WCF she believes her prayers from many years ago were answered.  Her treatment was based on i/v normal saline 500mg six hourly for four doses, Flagyl tablets 40g tds ( times five days), Panadol tablets 2td (two times a day) for five days. As of the time of this report, she is much better and soon to be discharged.

Karaoke Newton is 15 years old, and a refugee in cluster N who was diagnosed with severe malaria and his treatment was on Quinine 300mg i.v., and Paracetamol 1g tds for three days.  Karaoke is one of the students who have benefited from RMF’s services since 2008, from medical care, education, scholastic materials, etc., and he felt very proud when he was being interviewed by RMF because he sees the care of RMF is like what his father or his parents would do for him if they were able and that he is very much privileged to have RMF at the center of his life for the best services he needs as a growing child.