Project Goals:
Upgrade and maintain the Panyadoli clinic located in the Kiryandongo Refugee Settlement to high hygienic and operating standards; to restore optimal function back to the levels prior to IRC pull out and reduction in UNHCR support.

Target Population:
Over 40,000 residents in the Bweyale region, including 26,000 Ugandan IDPs, Bududa survivors, and Sudanese, Congolese and Kenyan Refugees which are the main target population (we have seen an influx of 10,000 new Ugandan IDPs in October 2010).

Summary of RMF-sponsored activities carried out during the reporting period under each project objective:
• The Panyandoli Health Center was provided with medicines and medical supplies during the period of January to March 2011.
• RMF provided the Panyandoli Health Center with 50 blankets, 33 pairs of bed sheets, and 21 pillows.
• Two ward cleaners and two ground keepers sponsored by RMF; the grounds are groomed regularly and the cleanliness of the wards and offices are well maintained. Due to the increased cost of living due to food and fuel inflation, ward cleaners’ salary has increased from KES 100,000/= to 150,000/= and ground keepers from 100,000/= to 130,000/=.
• RMF renovated the kitchen and built charcoal stoves which uses little charcoal and firewood.
• RMF repaired the borehole at the health centre and put in new solar panels to run tap water to all health centre facilities and the remaining broken taps are scheduled to be repaired by RMF.

Results and/or accomplishments achieved during this reporting period:
• The coordination of medicine supply to the clinic has made a significant difference to the community and has increased the clinic’s treatment capacity and overall reliability.

• There is always a flood of patients to the health centre whenever the drugs are brought.

• The wards are clean, and equipped with medicines and supplies, this is all a joint effort of RMF/WCF, the Masindi local government, and UNHCR. But RMF/WCF is so profound and praised in this project because it always provides quickly during times of great need.

• The grounds are continuously cleaned and maintained so that everyone feels safe to walk around without fear of being bitten by snakes.

• The Solar Powered Water Pump has been installed successfully and is now providing clean running water to the clinic offices and wards which greatly increases hygienic conditions of the clinic.

• In the month of January, 1,555 patients visited the health centre, out of which 581 were male, and 974 were female. In this month, the highest prevalent disease was Malaria, followed by Pneumonia, Respiratory Tract Infections and Intestinal worms.

• In the month of February, 1,278 patients visited the health centre, out of which 444 were male, and 834 were female. In this month, the highest prevalent disease was still Malaria, and followed by Pneumonia and Respiratory Tract Infections.

Incinerator for medical waste was installed at the health centre by RMF. 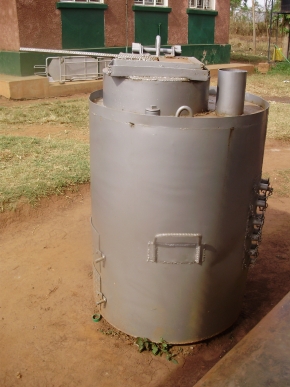 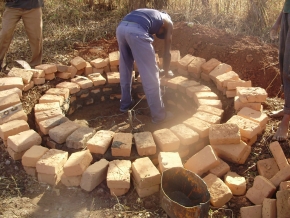 Patients are now very happy with the modernity of the health centre because they receive clean bed sheets, pillows, blankets, and mosquito nets when they are admitted. This lessens their burden of bringing what they use at home to the hospital and those left at home suffer, especially married couples.

Patients and caretakers are now very happy having the kitchen renovated with charcoal stoves built which use little firewood and charcoal. 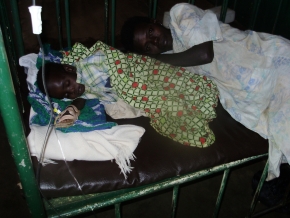 Joshua’s mother Akullo is now very happy. She arrived just as you can see her in this photo. Then she was given a blanket, mosquito net, bed sheets, and full treatment of her child for malaria. She felt the inner happiness when she was sharing with me. “Thanks be to RMF/WCF who can think of the very poor like us to be facilitated to be at the same level with a child of the rich treated at the private clinic”, she says. The child was put on the drugs for malaria treatment and after three days, they were discharged when the child was fine. 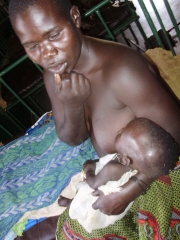 Abwoli is in this picture here with her child suffering from malaria with high fevers. When she arrived at the clinic, the child was tested with malaria and was admitted. Abwoli didn’t come with enough clothes to cover the child. She removed her blouse to lie on the child and she remained half clothed as you can see above in the photo. The mother was given a pair of bed sheets, blanket, and mosquito net, and the child was put on drip. Some of our patients and caretakers need serious counseling, not only giving them medication. 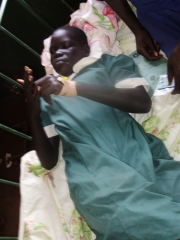 Norah had malaria but had heard that the health centre had run out of drugs temporarily, and her parents were buying for her Panadol, the pain killer, so she could persevere with her studies. When she had heard from school that RMF had brought resupply of drugs, she ran to the health centre. When she was tested she had malaria and needed to be admitted to be put on an IV infusion. She was provided with a mosquito net, bed sheets, and blanket and put on the IV drip. Thanks be to RMF to enable the health centre to have facilities like mosquito nets, bed sheets and blankets.