RMF’s Panyandoli Health Clinic at the Kiryandongo Refugee Settlement continues to be a thriving and successful primary health care clinic serving thousands in the surrounding community.

RMF’s Director of International Relations, Jonathan White, had the pleasure of visiting the Kiryandongo Settlement from May 3rd to May 7th.  During this time, Jonathan was given the full tour of all the Panyandoli clinic buildings and supplies by the clinic director, Dr. Simon.  Jonathan also met all medical, cleaning and support staff while on-site and was presented with various proposals where additional funding might help.

During this reporting period:

During the month of March, 4,311 patients visited the health center, out of which 2,226 were male, and 2,085 were female.  In this month, the highest prevalent disease was malaria, followed by URTI, and Intestinal worms.

In the month of April, 4,362 patients visited the health center, out of which 2,113 were male, and 2,249 were female.  In this month, the highest prevalent disease was still malaria, followed by acute malnutrition.

The coordination of medicine supply to the clinic has made a significant difference to the community and has increased the clinic’s treatment capacity and overall reliability. There is always a flood of patients to the health center whenever the drug supply is replenished.

Medicine supplies were depleted faster than originally planned due to higher demand during the first part of the year and the rising cases of malaria due to the beginning of rainy season. The fast resupply and provision of medicine by RMF at this time has saved the lives of many children who had been admitted at the health center.

The wards continue to be clean and hygienic through this joint effort of the clinic staff, RMF, the Masindi local government, and the UNHCR.  Much praise is given to all involved and specifically to RMF and World Children’s Fund for their continued valuable support of the health center. All of the staff is very proud to be working in such a well maintained and stocked clinic. 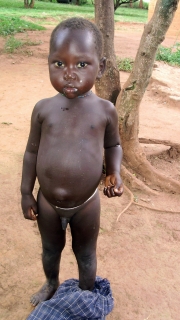 On the right is Ronald Opio, who was very sick with Malaria upon arrival at the clinic.  By the time I arrived with the drug resupply at the health center on 11th May 2010, Ronald had been admitted 3 days prior but had only been put on pain killers and IV drips as there were no malaria drugs. The family had been referred to Kiryandongo Main Hospital but could not afford the transport. On top of that there was a high possibility of the family reaching Kiryandongo Hospital and finding similar situation of no availability of malaria drugs.  When I brought the drugs, the child was treated immediately, and after 3 days, Ronald was well and ready to be discharged.  The family gives deep thanks to RMF to live long and to grow to serve.  The family was also educated on correct hygiene. As you can see from the photo below they were eating lunch in very unhygienic conditions and hadn’t bathed Ronald.

The month of May was very rainy which always increases the mosquitoes, hence much more malaria amongst people.  When the surrounding villages found out that RMF/WCF had brought malaria drugs, the number of sick children increased greatly at the ward, as you can see below, the children’s ward being three quarters occupied. 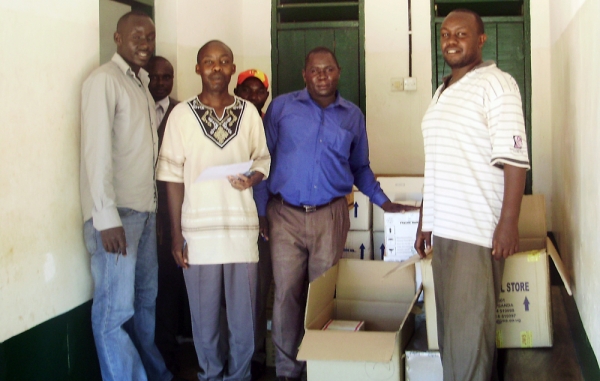