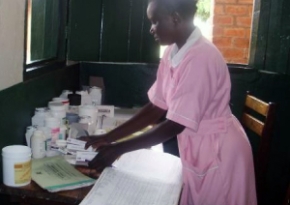 Since November 2009, as a result of the joint contribution of medicines by RMF and the UNHCR, and supported by WCF, the Panyandoli Health Center has had an ample supply of medicines to meet the needs of the Kiryandongo Settlement and the surrounding communities.

The coordination of medicines and medical supplies to the clinic has made a significant difference to the community and has increased the clinic’s treatment capacity and overall reliability.

RMF Country Coordinator Uganda, Naku Charles Lwanga reports, “Through RMF’s support, the clinic has again become a reliable source of health care within the community. Prior to RMF providing medicine support, patients accused the health centre workers of giving them half or quarter doses of medication.”

He explains, “The centre had been known as a “half dose centre.” Prior to RMF’s support, the centre received an inadequate supply of medication. Most of the time if a patient was not very sick, they received only a half dose and the patient was advised to buy medicine from a private clinic to complete the dose. Many patients could not afford to have a full course of medicines and to be fully treated.”

Now, with an adequate supply of medication, every patient receives the proper course. One local said, “The perception of the health centre has changed from a “half dose center to a full dose center.” Patients waiting to be seen, now relax knowing that inventories are full.

The clinic activity over the past three months has also been steady because of its reliability and appearance. Below is the morbidity data for November 2009 through January 2010

There were 3 deaths at the clinic over the course of the three months. One death resulted from AIDS complications and two were from lower respiratory tract infections.

RMF has also evaluated one of the clinics outbuildings to determine the feasibility of using it for the new kitchen structure. It was agreed upon that it can be upgraded to meet the total needs of the facility and it is no longer necessary to build new structures. This facility will help patients’ families prepare food for their loved ones while they are admitted and also support the Malnutrition Ward at the clinic.

Supplies to be purchased:

The availability of the drugs at the centre has attracted many patients, and no time is wasted at the health centre in making long cues. Having the capacity to better serve their patients, the staff has become more motivated and overall, the clinic functions at a higher level of efficiency.

RMF’s commitment has also strengthened that of the UNHCR and they now schedule their deliveries to arrive with ours, which has improved their reliability. 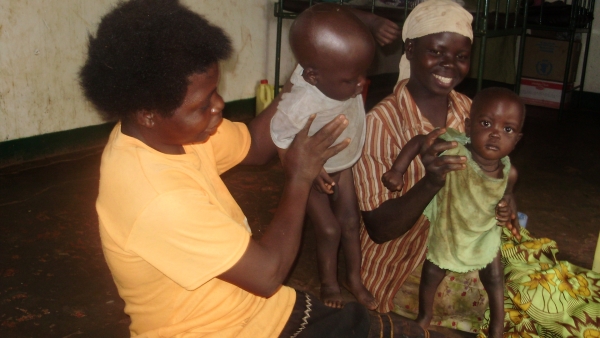 Brian’s and Denis’ mothers are happy seeing their children well after two days of being admitted with severe malaria. 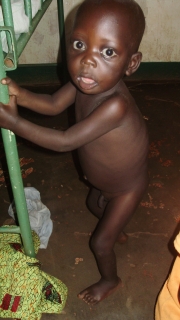 Brian, two days before admission and treatment. His health condition was concerning and his eyes had changed. He could not stand upright as he can now.

Charles Naku reports that, Brian’s and Dennis’ mothers said “due to availability of the drugs, our children are able to get well within two days from the day of admission. Drugs are available, health workers keep on checking on the children day and night.” Patients feel that the health care workers put in more sense of care and concern when they have drugs at hand than when there is shortage. The children’s ward had only three admitted children.

Women with children at the health centre said happily with smiles on their faces, “It is raining heavily and mosquitoes are many but few are admitted, thanks to RMF and UNHCR.”

Annah has been admitted at the health centre for two days and was very happy that the kind of care, concern, and availability of the treatment made her feel safe.

This has changed her attitude of this health centre. Recently, when her leg got dislocated, Simon, the center’s director, referred her to Kiryadongo’s main hospital. She refused, saying that treatment at the health centre is better than going to Kiryadongo Hospital where she will only receive painkillers like Panadol, nothing more.

Despite her praise of the clinic, Simon encouraged her to visit the hospital for further evaluation.

While Simon was treating his son Maliki Abdul, Yazidi shared with me how he is very much impressed with the availability of medicines and with the cleanliness of the centre. “Latrines, bathrooms, and compound are very clean and smart.”

His observation was only a “lack of a proper place for cooking.”

“As the health centre is approached, one is overwhelmed by a feeling of confidence of getting drugs and of being properly treated by the staff.”

“This kind of confidence heals someone before even getting treated, he said.” The previous frustrations and disappointment
of not finding the drugs at the health centre are no longer there.

RMF cleaners have helped maintain the cleanliness of the health centre to expectations. It is rainy and patients from Kiryandongo and Bweyale come to the center with mud all over. Despite this, the cleaners have maintained the spirit of cleanliness within all wards. Below left, is the maternity ward, still very clean regardless of the mud on the compound.

Above right is the children’s ward. Only a few children are admitted and when there are no patients, mattresses, blankets, bed sheets, and mosquito nets are kept in storage for safety. Some people were found wandering off with them and were caught at the gate.

It is rainy season now and the mud had made it difficult to enter the health center. Despite the mud however, the compound is well maintained by RMF grounds keepers.

Latrine areas and all common areas are well maintained, even during the rainy season. 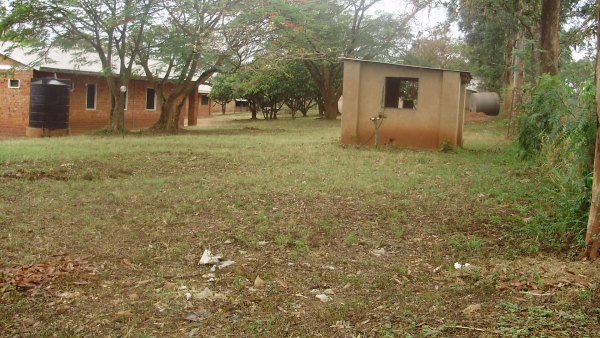