The following is a story told by RMF's Uganda Project Coordinator, Charles Naku, about a heart patient that we, together with Mending Kids International, sent to India for a heart operation.  This was done last year, and John Ochwo is currently in good health, slowly continuing to heal and about to go back to school.

“I was filled with hugs the day I broke the news to John’s family that John is going for operation abroad was approved and date is fixed. The family had got stranded with this child’s life right from the day they were told the child had heart problem. When it was discovered that John had heart problem, the family was told to be taking John to Mulago on a monthly basis but the family never afforded this. They could only take John to Mulago when John was seriously sick, and this meant soliciting funds from relatives and neighbors who felt for the life of John was diminishing. Whenever John was attacked by malaria and fevers his life was at comma and slimed whereby anyone could easily tell that the boy had a major problem with his health. This is how this boy was got to be known by Sr. Clare who was moved with concern seeing the life of the child at comma. Whenever Sr. Clare could go to class John was either absent or in class but very ill. When Sister interviewed the boy, found that the boy had this problem with no proper treatment due to money issue. When RMF/WCF intervened by sponsoring John Ochwo for monthly medication at Mulago Uganda national referral hospital, the family was filled with joy.

This joy did not only stop here but was crowned on Sunday, when they were receiving their son back from India where operation was made. Glory to Mending Kids International who facilitated John and his brother and all expenses occurred. Special thanks go to Sylvia and team that worked day and night to see that John and his brother Dominic are catered for at all levels. We know that Sylvia worked day and night sacrificing her sleep to see that John and Dominic were comfortable. Dear thanks go to Beth Cole who listened to Sr. Clare and initiated John’s help. Much more thanks go to administration of RMF Uganda, RMF US and WCF, and Mending Kids International for making sure that John receives all the proper treatment to this extend. RMF/WCF has played great role making sure that John is facilitated in his monthly treatment at Mulago referral hospital.

Below is John’s arrival and welcomed by his Daddy, Mummy, Uncle, and brothers at home. John’s return in good shape restored hope, love and vision for his future in the family. 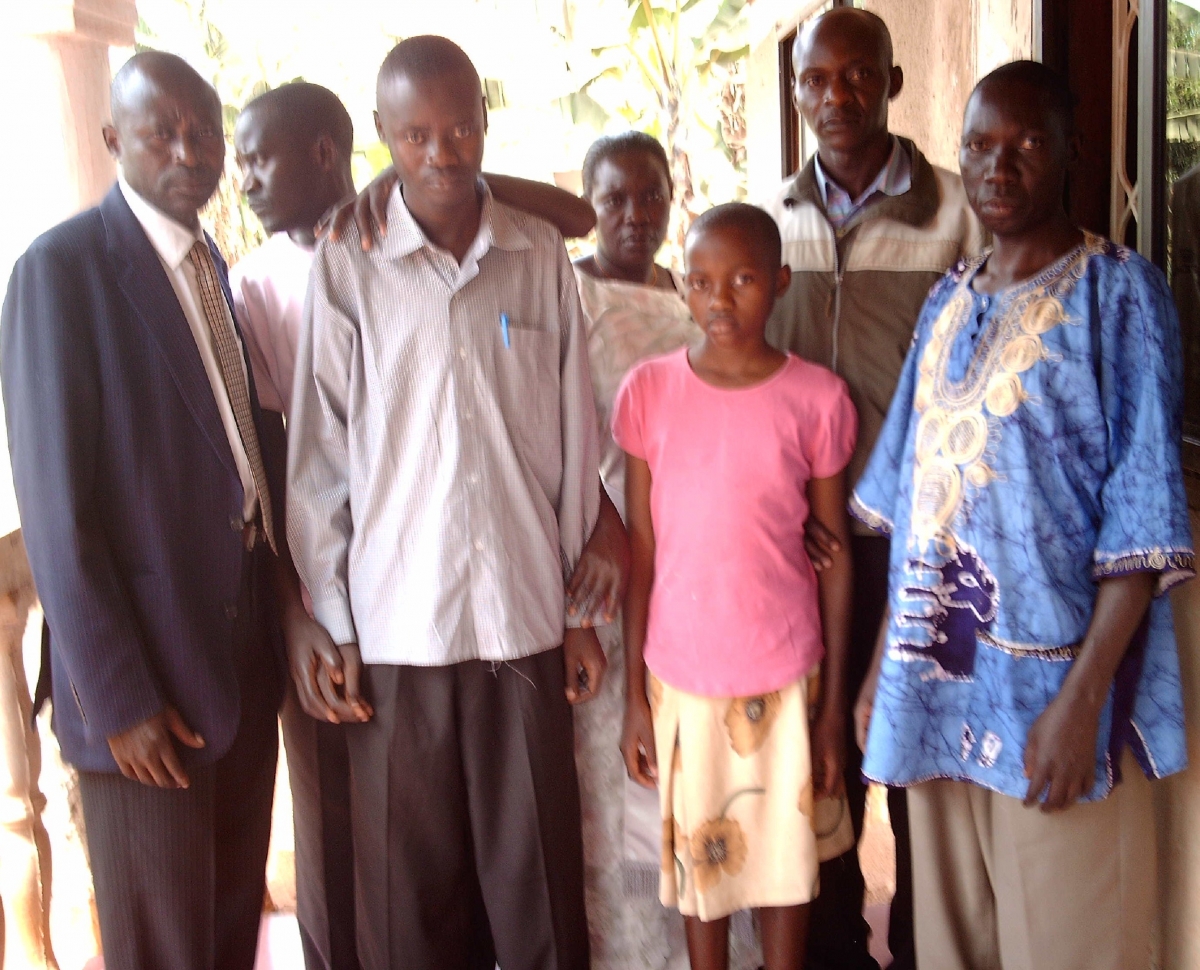 The gentleman in the suit is John’s daddy, followed by Dominic, his mother, brother, uncle, and the young girl is the cousin sister to John receiving John back home.
John returned in good condition with minor complaint of stomachache, chest pain, and his kidney. The doctor who worked on him said that he may have this complain for three months, but if the pain is extraordinary he can visit the nearest doctor for check up. He was given three months drugs, and if all get finished, he must get immediately without missing any and to be on check up every three months. He was also denied some types of vegetables and encouraged to drink, but after three months he will have some healings and can eat the above denied food stuffs. His studies are also put on hold for a month.

John is back happily though he is not yet completely healed, his family is happy filled with joy but more help is needed. John needs facilitation in accessing Mulago every three months, and also getting a local nurse or doctor to be injecting him every three weeks, and if possible to be supported with food and drinks even if for a short time. His parents now find it difficult feeding him, his appetite is low and he needs good food which parents cannot afford. He might also need some emergency attention whenever he may have unusual complications.