RMF’s acupuncture outreach and yoga programs at the Mama Kevina School in Tororo, Uganda, continued to serve those in the community in need of ongoing support for post traumatic stress related complaints. The student population is mostly from Northern Uganda where many children have been affected by ongoing wars, floods and HIV/AIDS. Many of the students' parents were slaughtered by rebels or killed by AIDS and left as orphans. Two of the boys were forced to be children soldiers.

In addition to RMF Country Coordinator, Charles Naku, taking time to treat students, taxi drivers and community members living in the Tororo slums, nurse Faith Karakacha continued to serve those along the border and at Lira Nursing School.

During the long holiday, the number of patients treated by Faith increased as a result of the community having more time to seek out needed care during this period. To provide more assistance to the community, Faith’s treatment hours are being increased.

Students at the school also continued to practice yoga under Patrick Ojuman’s lead.

John Ochwo, our rheumatic heart disease patient, remains on the waiting list for surgery at Mending Kids International (MKI), however, he is now number 13 on the list. The staff at MKI believes there is a good chance he'll be selected during the next selection committee meeting in late February. In the interim, John has received medications and attended his monthly examination at National Referral Hospital Mulago, Kampala, both of these services are provided by Real Medicine Foundation.

Our program’s impact during the last reporting period included

Here are just two of many success stories

John, 29 years old, lost his job as deputy head teacher and had no money to pay rent. At the same time he needed money to attend his graduation at Makerere University on January 19, 2010. John sought counseling and NADA treatments from Charles. His stress is reduced and he found the courage to move forward. 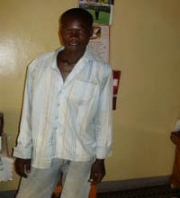 Okello, 26 years old, is a Boda boda (taxi) driver who recently started drinking heavily when he and his wife divorced. His colleagues brought him for NADA treatment to address his drinking problem as it was affecting his ability to work. Since receiving regular treatment, his drinking has decreased and he is back to his job and working steadily once again.