Success Stories From the Field 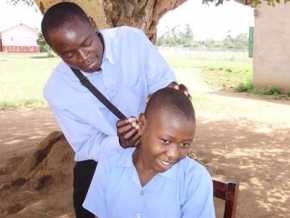 Aketch Tereza, a 16year old girl in senior four at Mama Kevina Comprehensive School in Agururu Tororo, is one of the students traumatized by war and HIV/AIDS. She is an orphan losing her father in war and losing her mother to HIV/AIDS. She was raised by her grandparents enduring the hardship of the rural poor. School fees and daily meals were very difficult to attain. Afflicted with nightmares of falling in a ditch and being chased by someone with ill intent Tereza took advantage of acupuncture treatments being offered at Mama Kevina. Treatments reduced the stress of being an orphan and her nightmares disappeared She also uses the treatment to help her concentrate during reading, previously when she went for her private reading/revision, only bad memories would arise and her stress would increase. Tereza has also learned to reduce her tension through yoga which has been offered daily since RMF provided yoga training to the Mama Kevina staff last year. 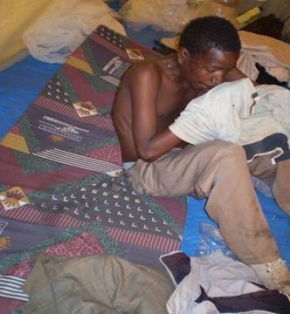 Joshua Mbugwa, a 42 year old bedridden man infected with jiggers and malaria, was unable to work since he arrived at the Mulanda Transit Centre in February 2008. The Transit Centre was a temporary refugee camp established for those fleeing from violence in Kenya. Jiggers is a debilitating mite infestation in the feet which can literally eat away the toes. Malaria medication and disinfectant for jiggers was administered at Mulanda, but his condition never improved. He was suspected of being HIV+, but refused testing. Joshua was also suspected of drinking alcohol at night. His lips turned red and his malaria persisted. His condition declined as he grew weaker and lost his appetite. When it was time to leave Mulanda for the permanent refugee settlement in Kiryadongo, everyone doubted he would reach Kiryadongo alive. He survived and his condition continued to deteriorate. Acupuncture was introduced to Joshua at Kiryadongo which helped with his alcohol cravings and allowed him to cease drinking. Later malaria homeopathics were administered. Not only did the homeopathic malaria treatment cure the malaria, it also cleared up the jiggers letting Joshua walk and work in the fields. In the above photo Joshua is very thin, sickly and weak, but today he is healthy and strong. Very proudly he displays the blisters and calluses on his hands from working in the fields. 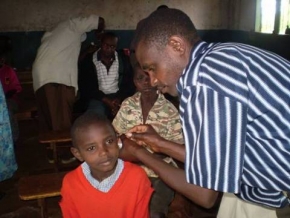 David Njoroge, a 12 year old boy, was suffering from bed wetting. The child started feeling rejected by his family and peers. He was laughed at and mocked causing trauma and low self esteem. Bedwetting in a refugee settlement adds an extra layer of stress to a harsh existence. A family member has to walk a distance for water, carry the heavy load home, hand wash the sheets and pray for a sunny day to dry them which doesn't come often during rainy season. At Mulanda Transit Center, David feared acupuncture treatment and refused treatment. Through continuous encouragement David finally agreed to be treated. After receiving NADA treatments, gradually his bed wetting stopped. Now David feels loved by his family, accepted by his peers and has regained his self esteem. 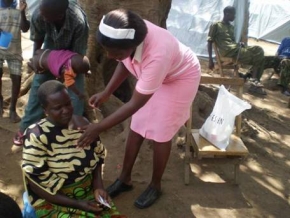 After an inter-clan conflict which resulted in destruction of property and loss of life in the Tororo area, a number of people were placed in an Internal Displacement Camp and put under guard for their own protection. Faith, trained in acupuncture by RMF, delivered NADA treatments at this site, and reported that many patients who were hopeless and despondent after the conflict, found a renewed sense of hope and purpose with the treatments. Norah Akajo, a 41year old woman was traumatized by the Mella inter-clan war, seeing her house burnt and her husband beaten badly and jailed. She got confused and lost hope for her and her children. When Faith approached Norah about acupuncture treatment, she accepted. After treatment once again she could accept the reality of life, cope and think clearly. Prior to receiving acupuncture treatments Norah was planning on selling donations given to her by PLAN International to help start her life over again. She says "If Faith had not given me acupuncture treatments I would have sold off the donations, wasted the money and now be more frustrated." She is thankful for free Acupuncture treatments that balanced her emotions and mind during a traumatizing time leading her to make wise decisions for both her and her family.