Trauma Relief and School Support for Kenyan Refugees in Uganda

The Kenyan refugee community at Kiryandongo remains deeply appreciative of Real Medicine's tuition support program for the children in the settlement. Students continue to study comfortably without stress because their school fees are paid and scholastic materials such as books, pens, and pencils are provided.

During this reporting period, RMF provided school fees and scholastic materials for the following 876 students children in nursery, primary and secondary schools: 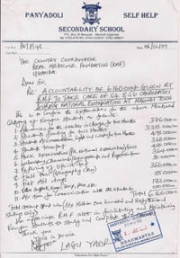 28 secondary school children in Senior 4 and Senior 6 took the national examination for consideration of advancement to Senior 5 and University. Accommodation, transportation and meals were provided by RMF during the 2 to 4 week examination period in Masindi. Attached is the letter of appreciation and accountability from the secondary school.

Recently, the Ugandan Office of the Prime Minister made a request to Real Medicine Foundation to help provide tuition support to 34 of the Sudanese children in the settlement to attend the Panyandoli Self Help Secondary School. RMF is investigating funding to extend its program to aid these children. 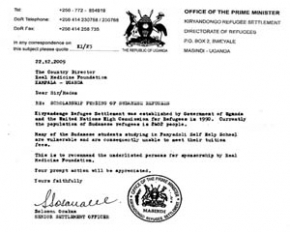 This reporting period, Real Medicine Foundation joined with the UNHCR to provide the Panyandoli Health Centre with critical medicine supplies, giving patients the option to either utilize pharmaceuticals or acupuncture to address their conditions. The majority of the Kenyan refugees continued with acupuncture treatments exclusively, while most others used both acupuncture and pharmaceuticals.

There is no question that Body Point Acupuncture and the NADA protocol have become part of the lives of the people in Kiryandongo and are reliable and safe options for them to treat their various illnesses, pain, and psychological trauma.

For this reporting period: 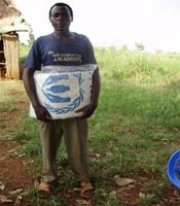 32 year old Mr. Samuel was complaining of asthma attacks, which would occur either very early in the morning or in the evening. He'd have difficulty breathing as if he was suffocating. Whenever an attack came on, he would feel feverish and shiver. Samuel takes pharmaceutical medication, but at times he feels his body has become resistant to the drugs and they are ineffective. Following several NADA treatments he realized improvement in his breathing and he no longer experiences daily asthma attacks or the fevers and chills. The synergy of combining NADA with pharmaceuticals appears to have brought Samuel's asthma under control.

Peter, a 27 year old patient has had insomnia and fatigue for a long time. After 5 months he has completely recovered. He can sleep through the night and has energy.

Priscilla, 38 years old, has been suffering from stress due to poverty and struggling with life every day. The family has only one meal a day, which is not normal in Uganda. With no money to access basic necessities like soap, salt, matches, clothing, or food, the family just waits for neighbors to lend a helping hand. They are laughed at by those who living independently. Life's difficulties make her quarrel with her husband and blame him for failing to provide. She is having difficulty accepting her condition of being a refugee. Her husband cannot comprehend her feelings and subjects her to domestic violence that leads to more stress, which lowers both her immunity and her appetite. Priscilla's immediate neighbors saw the life she is living and advised her to meet with acupuncture team. When she was treated they asked her to bring the husband for treatment as well.

Both received treatment and counseling by the acupuncture team. Because the acupuncture team earns a stipend from RMF they shared some of their earnings to further ease the couple's pain. If the team discovers a desperate situation like this they always sacrifice something to that person. At the moment, the couple is calm. Although they are still struggling with life, they have now found a way to cope. Both Priscilla and her husband continue to receive acupuncture treatments. All domestic violence has stopped. 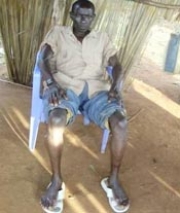 Edward, 50 years old, was suffering from long term diabetes. He experienced labored breathing, general weakness, inability to walk a distance, loss of appetite and impotence. Upon completion of several body acupuncture treatments, he has improved and can now do his daily duties and lives a very normal and comfortable life. His appetite is back, his breathing is normal, he can walk to the garden, dig and come back home, and he is sexually active again. 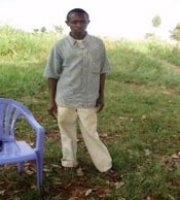 Timothy, 29 years old, has been a patient for the last four months. He had wounds, which were not healing. When Timothy would get a small wound he would scratch it and it would grow bigger. His medications were slow to help heal his wounds. When he was given acupuncture treatment he was advised to clean the wound very well and eat more protein to help support the healing process. His wounds have completely healed and Timothy now proudly displays his scars.

Homeopathic treatment for Malaria has shown to be very effective in curing and preventing malaria, and supported the community during occasions when Panyandoli Health Centre was low on inventory for malaria medicine. Health workers could only diagnose patients and prescribe drugs for patients to buy from private clinics. After the diagnosis from the health centre, many patients sought out the homeopathic malaria team for free treatment. The opportunity to receive homeopathic treatment is no longer an option. Malaria homeopathy operations ceased the second week of November 2009 at the request of the Ministry of Health. 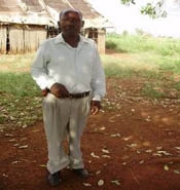 Clement, 40 years old, woke up one day with joint pains, general weakness, and depression. He had used malaria pharmaceuticals two weeks earlier, but his body had become resistant to the medicine. Clement thought of malaria homeopathy as an alternative. He was cured in one day and felt he must have his family take prophylaxis to protect them from Malaria. 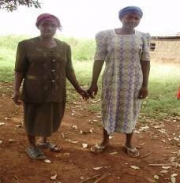 Sara, 28 years old, was sick and visited the malaria homeopathy team. Sara was treated and directed how to take the homeopathy, however she didn't comply with the instructions and the treatment was ineffective. She went back to the malaria team, told her story and received a second treatment. This time, following the team's instructions, Sara was healed. 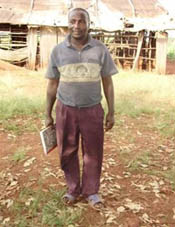 Zakayo, 50 years old, visited the malaria homeopathy team when he was shivering with malaria fever. He was treated and after two weeks he was cured and strong enough to perform his daily activities.