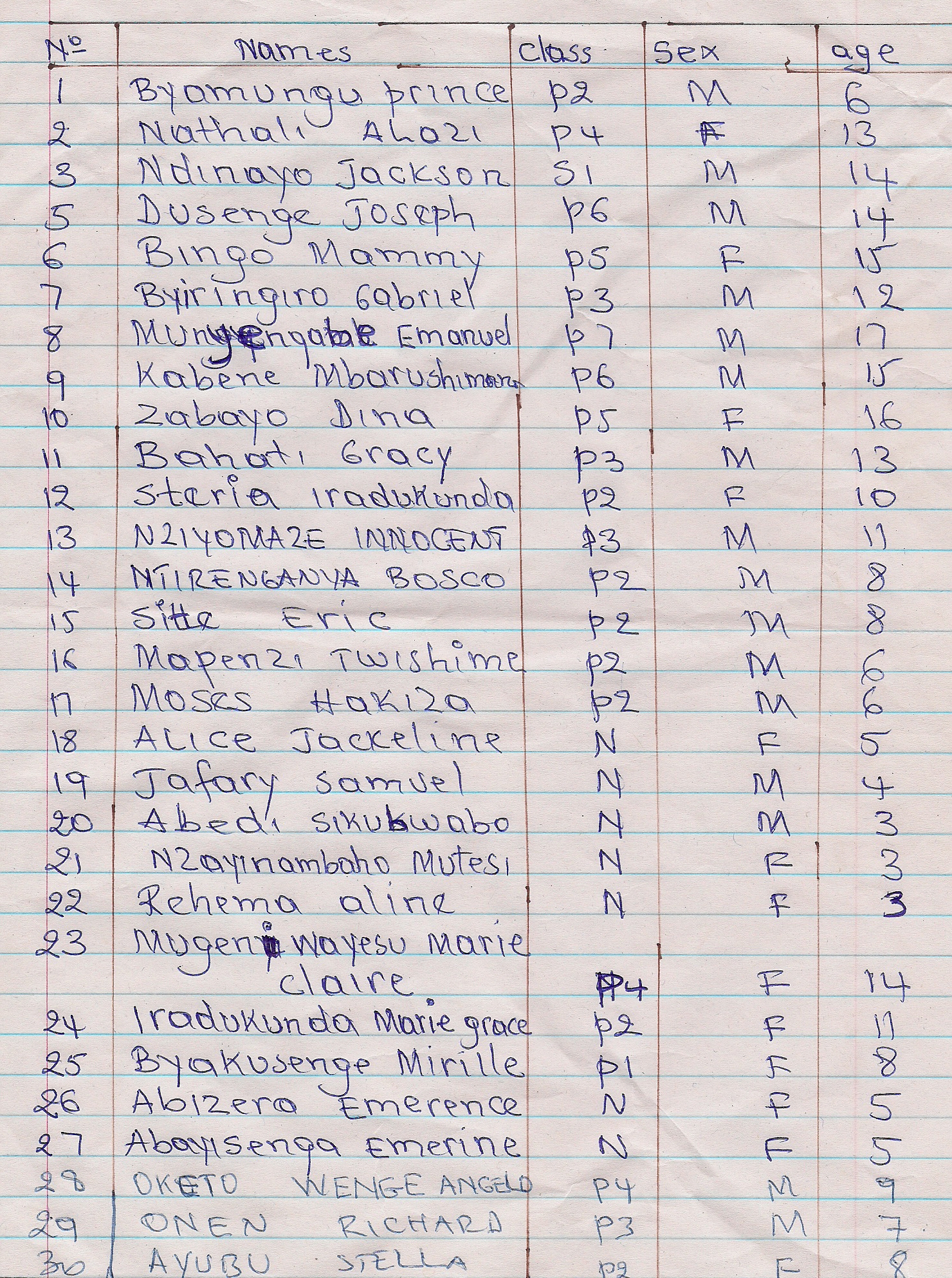 During the first week of May, RMF Director of International Relations, Jonathan White, was hosted successfully at the Kiryandango Refugee settlement for three days and had the opportunity to see our School Support and Acupuncture programs in detail. Jonathan also held meetings during his visit, with all of the stakeholders involved: community leaders, UNHCR and Government representatives, schools’ teachers and principals. The following report summarizes the March to May time period for the School and Acupuncture programs, as well as feedback and recommendations for the continued success of our initiatives at Kiryandango.

The top request for new funding to RMF for the entire Kiryandango Community was for the re-opening and funding of a Vocational Training Center with classes for carpentry, tailoring, and hairdressing.  These classes are needed as the schools are graduating well educated students but they don’t have the type of technical skills needed to find jobs locally. This program was open two years ago, but had closed due to lack of funding and appropriate training equipment.  An empty building already exists for this purpose, and RMF is awaiting cost quotations for staff salary and equipment to reopen program.

765 students in total were supported by RMF funding in Nursery, Primary and Secondary schools during the first term of the year.

Schools funding needs: Issues/projects presented to Jonathan by the teachers and principals were: Potential Support of 30 new Congolese students in Primary School, Funding needed for teacher and students’ lunch, furniture needed at Nursery School, Funding for shade trees at Primary and Secondary Schools, and Funding for musical instruments, toys or sports equipment needed for students.

Simon Peter is a 47 year old Kenyan. He started his treatment with NADA because of too much stress caused by poverty and inability to meet the demands of his children. Peter had been taking his frustrations out on his wife by fighting and quarreling. His garden was also faring poorly, and he could not harvest enough to cater for his family’s needs. He was miserable and frustrated. He was approached by the NADA team, and was asked about his problems. He was helped through counseling and treatment to accept the reality of poverty and its consequences.  He was put on NADA treatment and opened his mind to other solutions to make life better for his family within his reach and the limitations of living in the settlement.  He has responded well to the treatment and gradually he is getting better and able to approach his responsibilities with a clear mind.

David is 19 years old, and is having a rough time in his adolescence. Instead of concentrating in his studies, he is forever chasing girls. When his parents noticed this, he was reported to John to give him some counseling and NADA treatment. John has counseled him and treated him with NADA.  His behavior has changed for the better, and he joined John Njoroge’s church.

John is 54 years old and a builder by profession. He is not used to digging which is a problem to most Kenyans. Kenyans, especially the Kikuyus, are naturally business oriented, and the manual labor of digging is something they are still not accustomed to. John has been hanging around Bweyale centre to see if he can find a job as a builder but hasn’t found anything yet.  He has been depending on the UNHCR food given which is not enough for his family. He had received a little money from RMF when he helped paint the Panyandoli Health Centre. He invested it into his garden, with Sudanese refugees working in his garden to help him with the digging and planting, which supported his family. This year he has not got any job to support the garden.  His family is worried as they do not have enough food at home and he is not doing anything to change the situation.  He has recently started undergoing treatment with NADA and counseling to adapt to digging and gardening as this is the only way for him at the moment to support his family. When he went to the garden, he felt exhausted and tired, and waking up the next day was a struggle. This feeling of exhaustion has been cleared by the NADA treatments and he is starting to work steadily in his garden.

Munoko Clarence, 27 years old has been experiencing eye problems with blurred vision when the sun is shining too much, and eye irritation. She approached the body point team and was put on treatment. As of now the irritation has stopped though the effect of the bright sun remains a challenge.  She has been encouraged to take more treatments, and has also been consulting an eye specialist.  Since she is too poor to pay for eye specialist treatment, she thanks RMF’s body point team who has healed her eye irritation at the moment.

Jemimah Mutimo, 48 years old, has been having a leg problem. She felt as if she had been hit with a stick. This made her start walking with a stick, and she was compelled to meet the body acupuncture team for treatment. She now no longer needs to walk with a stick. The healing happened after two weeks of treatment. She is still attending treatments and is now an ambassador and advocate for RMF body point treatment wherever she goes.

Margaret Mukwaiti, 51 years old, has had very painful periods. In the month of March, she treated herself with body point. In the month of April, she did not have her period, and continuing into May, she has not seen any sign of having it. She thinks body point has helped her in handling her menopause with acupuncture.