The Kiryandongo Refugee Settlement is comprised of approximately 5,000 Sudanese and Kenyan Refugees. Surrounding this area are over 10,000 Ugandan IDP’s (Internally Displaced People).  The Panyadoli Health Center, which Real Medicine is upgrading, is the main health center for these communities.

Malaria is perhaps the most pervasive of infectious diseases in the world, killing millions each year and rendering still millions more sick and bedridden.  Traditionally, malaria medications are high in demand, costly when not subsidized by government and/or international aid organizations and their efficacy varies.  The Kiryandongo Settlement is no exception. Year after year malaria holds the number one spot on their list of diseases treated, many of the refugees contract malaria monthly.  Often times the clinic runs short of malaria medicine to meet the demands. 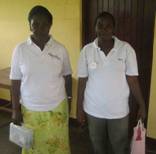 In December 2008, RMF Team Whole Health Director and Ugandan Country Director, Beth Cole, and Megan Yarberry visited the settlement to provide another acupuncture training, a program that is gaining wide acceptance for pain and stress management throughout the camp. To ease the suffering of the refugees and the burden on the health clinic, in conjunction with Abha Light Foundation based in Nairobi, Kenya, homeopathic malaria training was initiated. The same homeopathic medication that is used as a prophylactic can also be used as treatment when taken more frequently. Simple, cost effective and easy to use, the protocol was taught to Kenyan Refugees. Susan and Margaret who are pictured here have become the most popular women in the camp.

Here are some of their fans that have been successfully treated by the homeopathic team and came out to tell their stories. 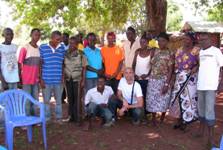 Most patients have reported relief from fever, headaches, fatigue, dizziness, hallucinations, and ringing noises in the head. Even cerebral malaria has been successfully treated.

Even more surprising is that many people also reported the clearing of respiratory congestion that existed prior to contracting malaria.

At the Panyadoli Health Center malaria medications are usually in high demand, so high, that the staff runs out of the supplies provided by the government and UNHCR. When this occurs patients have to go into Bweyale town and purchase medicine for treatment and prevention from a local pharmacy. A three day supply costs about 15,000 Ugandan Schillings or about $8 US. Six more days are required after the initial treatment course for prevention that will last approximately 6 months. At $24 per patient for six months, $100 would treat 4 patients.

The investment for RMF's current homeopathic program at the Kiryandongo settlement was approximately $100 for six months of homeopathic malaria medication. What is remarkable however is that there is a marked difference in the number treatable for this amount: approximately 2,000 patients more on the homeopathic program. Even the patients seem to prefer it stating that it is more effective than conventional medicines.

Over 1,500 cases of malaria have been successfully treated.  From adults to children who have had chronic malaria, to a teen suffering from cerebral malaria and needing to be restrained due to mania, the protocol has cured every case. 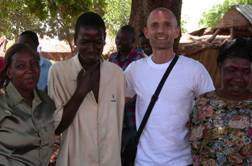 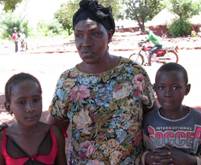 Joshua Mbugwa, pictured above, was bedridden for some time and unable to work, he had a most compelling story.  In addition to Malaria he was infected with painful, debilitating jiggers (tiny mite infestation in the feet), which can literally eat away the toes. Not only did the treatment cure the malaria, it also cleared up the jiggers so he could walk and work in the fields again. Very proudly he displayed the blisters and calluses on his hands and blessed Real Medicine for our support.

The stories kept coming – Susan and Margaret have walked the village since early December and have treated over 2,000 cases of malaria.  Special meeting points within the village have been identified and times were designated throughout the week. – Susan says they get “overwhelmed” by refugees wanting the medicine.

One man said “Look at the Health Center, there are no patients there being treated for Malaria…this is unusual.  The treatment is working so well.”

The news of the treatment’s efficacy is spreading like a bush fire and while the successes continue to mount, there are still some challenges.  During rainy season Susan and Margaret will need some additional supplies to maintain their work, i.e. gum boots, bikes and offices supplies to stay organized.

Additionally, more time is needed to gain acceptance by the Sudanese community.  While Susan and Margaret have offered their services to the Sudanese, they remain skeptical, not so much because of the treatment itself but because it is administered by Kenyans.

During their next visit Beth and Megan will train some Sudanese refugees and Ugandan IDP’s to administer the homeopathic medicine to overcome this obstacle. Later this year we will report on the final outcome of our study.